“Looking for a Fight”: Police Escalate Violence Against Counter-Protesters at Boston’s “Straight Pride”

On August 31, protesters turned out in hundreds to stand up against the homophobic, xenophobic “straight pride parade” in Boston. The state deployed police forces from across Massachusetts to protect the fascist march and violently repress counter-protesters. A participant in the confrontation recounts the events and explains why the left needs its own bodies of self-defense to combat the right and the state. 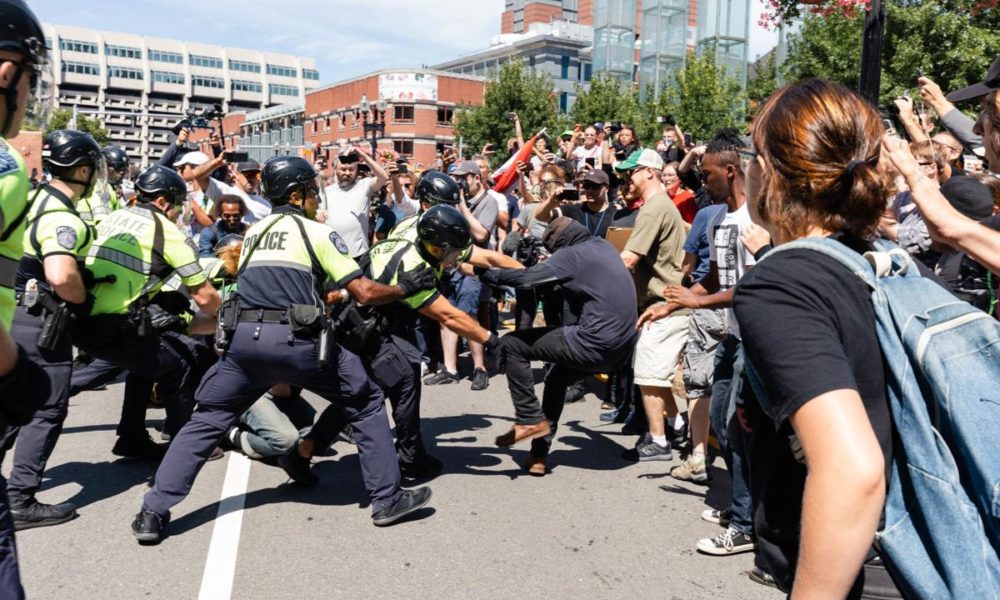 On August 19, 2017, some 40,000 people took to the streets of Boston to shut down a white supremacist rally. Although the Boston Police Department showed up to protect the white supremacists, that day was both a sweeping success for the counter-protesters, who completely overwhelmed the far-right event, as well as a proud moment for many Bostonians. Only two years later, on August 31, 2019, a “straight pride parade” was organized in Boston by Super Happy Fun America, a “straight pride” group with ties to fascist and white supremacist organizations. About 100 “straight pride” marchers attended, wearing Trump 2020 t-shirts and riding floats that read “build the wall.” Even more concerning than the fact that the gathering was a purely homophobic mockery of LGBTQ Pride, this event was also a far-right, white supremacist rally founded on xenophobic and violent rhetoric. In response, over 1,000 people turned out to counter-protest at an event called “Straight Pride is Hate Pride,” which rallied in the Boston Public Gardens and marched to Copley to confront the fascist march.

When I arrived at the rally in Boston Public Gardens, there was already a wall of police on bicycles lining the street and plainclothes cops patrolling the counter-protest. Almost immediately after I got there, several police officers pulled a trans woman out of the crowd and threw her to the ground—simply for holding a megaphone. They did not ultimately arrest her, likely because of the crowd’s outrage and shouts of “you’re violating our first amendment right to assemble!” Regardless, this unprovoked and excessive police violence against the counter-protest set the course for the rest of the day. Police continued escalating the situation, pushing the counter-protest—which was within pre-established police barricades to begin with—off the street and onto the sidewalk and attacking counter-protesters with pepper spray and physical violence.

The fascist march, which shamefully had been granted a permit by the City of Boston, proceeded down the street toward City Hall. Counter-protesters followed the march, lining the sidewalks and spilling onto the streets. The police were positioned between the fascist march and the counter-protest, with their backs to the fascists. I saw police from upwards of 20 different Massachusetts towns and cities, as well as state police in riot gear, SWAT teams, and a bomb squad unit, all of which were focused on obstructing the counter-protest and facilitating the fascist march. Unofficial estimates put their numbers in the thousands.

Such inflammatory intimidation tactics toward the counter-protest proved to all in attendance which side the police are on. Their nonstop antagonization of the counter-protest made it clear that they were looking for a fight. To speak for myself and the group I counter-protested with, we were prepared to confront fascists. We anticipated the possibility of physical violence from fascists, and we made two safety plans in the event that the confrontation became dangerous. What we were not prepared for was how far the cops were willing to go to facilitate the fascist march, or how violently they would attack the counter-march.

Those of us who protested—whether we showed up because we are LGBTQ, people of color, immigrants, socialists, working-class, women, or some combination of those things—already knew from personal experience that the police will always side with fascists over marginalized people. Still, the events of August 31 indicate a shift in our struggle against the global rise of fascism. In our current moment, the state can and will openly sanction and facilitate public demonstrations of fascism, to the point of violently attacking those who express disagreement with fascist ideas. This means that opposing fascism, white supremacy, and other hateful ideologies entails direct conflict with the state, and in order to do that, we need a militant, organized left.

Despite the magnitude of police repression, there were moments of victory at the “straight pride” counter-protest. There were times when the crowd’s anger convinced police to release someone they had arrested, moments when the counter-protesters were able to push back the line of police or find our way back to one another after being divided by police. There was an abundance of medics who handed out water, cough drops, and sunscreen and assisted people who had been pepper sprayed. If we want to more successfully defend ourselves against police violence in the future, we will have to expand these tactics of self-defense.

Various methods of community self-defense have been implemented in past struggles. The Black Panthers, as part of their comprehensive struggle against capitalism and imperialism—which they identified as the root cause of racial oppression in America—had to defend themselves against the state. Knowing that police regularly targeted Black individuals with often fatal violence, the Panthers organized to patrol Black neighborhoods. If the police stopped someone, the Panthers got out of their cars and watched the interaction, armed with guns and extensive knowledge of the law.

In a more recent example, activists around the country have created rapid response networks to fight against deportations. The effectiveness of these neighborhood organizations can be seen in the way that neighbors prevented the deportation of a man and his son in Tennessee by bringing the family supplies and creating a human chain to block ICE agents from reaching them. There are still other kinds of self-defense tactics that can be used at protests; when I lived in Chile, I saw students and teachers build barricades inside school buildings and protesters build barricades to support them outside. In the labor movement, militant pickets have stopped scabs from entering factories.

These examples of effective community self-defense can serve to guide leftist organizations as we prepare to face increasing violence from fascists and from state agents such as the police or ICE. However, recent events in Boston show that these specific encounters will lead to confronting the capitalist state in its entirety. The ways we will defend ourselves going forward can only be decided in conversation with each other and in the context of particular situations—whether they be violence at a protest or violence in an immigrant’s home—but it can no longer be denied that this sort of preparation is going to be increasingly critical for those of us who are anti-capitalists and want to fight against the right and for socialism. As we continue fighting back against fascist “straight pride” demonstrations, new immigrant detention centers, or the construction of pipelines, we need to be prepared to face increased repression and police violence at protests. Through solidarity and organization, and by continuing to learn from our comrades to resist more effectively, we can fight against the oppressive capitalist state, the fascists, and the police who protect them.