Louisville PD is Trying to Cover up Breonna Taylor’s Murder. Don’t Let Them.

The Louisville Metro Police Department has released the incident report from the night of Breonna Taylor’s death. One problem: it’s essentially blank. The attempted cover-up of the case illustrates the “systemic” in systemic racism and the complicity of everyone in the criminal justice system. 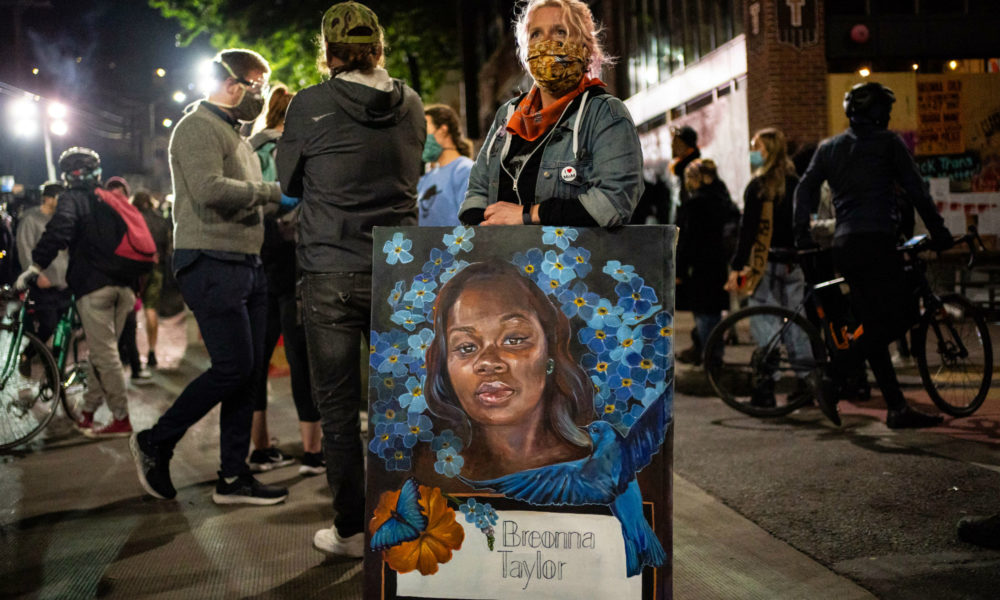 On March 13, police officers in Louisville, Kentucky broke down Breonna Taylor’s door in the middle of the night and shot her at least eight times while she slept. From the very beginning, a number of glaring holes in the officers’ story revealed an attempted cover-up. Three months later, on June 10, the Louisville Metro Police Department released its internal incident report — which is essentially blank and includes several provable lies.

The report claims that Taylor’s injuries were “none,” despite the fact that the Police Chief confirmed the following morning that she had been killed at the scene. The report also says there was “no” forced entry, even though both witnesses report and photos from the scene show that the police used a battering ram to enter the apartment. The “charges” section of the report describes the incident as a “LMPD involved” “death investigation,” and the “narrative” section only has two words: “PIU investigation.” The rest of the report, apart from basic identifying information, is blank. When criticized, the LMPD claimed the report was the result of a software error. They have so far failed to “fix” this “error.”

As facts about the case have come to light, it’s clear that the LMPD has lied on multiple occasions, in addition to the examples mentioned above. Breonna Taylor’s own mother was told her daughter was alive and at the hospital, when in reality she was lying dead on the floor in the next room. The LMPD also originally claimed that Taylor’s partner, Kenneth Walker, was the only one to have fired a weapon that night, when in reality the police fired at least 20 rounds into the apartment, at least eight of which hit Taylor, according to reports in local news. Additionally, the police claimed they knocked on the door several times and identified themselves as police, but the warrant used to enter the apartment had a no-knock provision, the police were all wearing plainclothes and using unmarked cars, and neither Walker nor the neighbors heard any sort of identification. Furthermore, it’s unclear why the police entered Taylor’s apartment at all, given that the main suspect of the investigation — Taylor’s ex-boyfriend Jamarcus Glover — had already been located elsewhere and was arrested that same night.

In an attempt to independently verify the facts, the Courier Journal, Louisville’s local paper, has sued the LMPD for access to their internal investigative files and has filed an appeal with the Kentucky attorney general’s office to dispute the decision to not release the incident report, Taylor’s autopsy, and all 911 calls associated with the event. So far, these files are still being kept under wraps, raising additional suspicion as to what they might — or might not — contain.

The ongoing coverup of Taylor’s murder is just another example of how the problem with police violence does not lie with individual “bad cops” who make bad decisions or need more training. The entire LMPD and the surrounding justice system is at fault. The warrant used to enter Taylor’s home was issued as part of a months-long investigation — an investigation large enough to have involved a number of officers and staff, as well as the judge who issued the warrant. In the bureaucratic aftermath, the LMPD has closed ranks to protect itself, and every piece of the chain is complicit: the officers, the internal investigators, the internal bureaucracy, the local government officials blocking transparency, and everyone else who is part of the Louisville justice system but has not spoken out.

This mass complicity is part of what “systemic” racism means: the very rules, norms, and procedures of the system lead to Black people being murdered without any accountability for the perpetrators. Being internally uncomfortable or upset by the case is not enough, if you are still doing the everyday tasks necessary for these atrocities to continue as business as usual: filing the paperwork, following the rules, toeing the PR line. This is why police departments can never be reformed under capitalism: the work itself is the problem, so everyone involved — even the “good ones” — are helping to do irreparable harm. Capitalism needs an oppressed class in order to function, and policing Black and Brown people with impunity is one of the several ways it maintains that oppression.