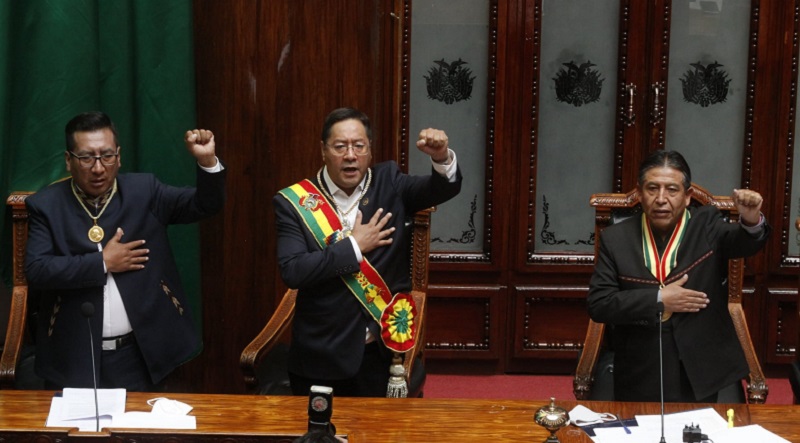 On Sunday morning, surrounded by thousands of peasants, union delegations, and international guests, Luis Arce Catacora was sworn in as president of Bolivia. Also present were several heads of state, including President Alberto Fernández of Argentina, Iván Duque of Colombia, and King Felipe IV of Spain.

Arce, the candidate of the Movement for Socialism (MAS), received 52.4 percent of votes in the first round of elections on October 18. The elections took place one year after former president Evo Morales was ousted in a right-wing coup.

Notably absent at Sunday’s inauguration were former de facto president Jeanine Añez and her cabinet, the center-right opposition headed by Carlos Mesa of Comunidad Ciudadana, and Luis Fernando Camacho of the far-right alliance Creemos. Mesa, Camacho, and their respective members of parliament did not attend out of protest against a change in parliamentary procedure that the MAS passed in the last session of the Plurinational Legislative Assembly (ALP). The change means that an absolute majority, rather than two thirds of the ALP, is required to pass certain legislation, allowing the MAS to avoid the opposition’s veto.

The most controversial event at the inauguration involved the president of the Senate, Andrónico Rodríguez, who is also the leader of the coca growers. Rodríguez chose to bow down before King Felipe IV of Spain, the figure who most directly expresses the colonialism and brutality suffered by the indigenous peoples of Bolivia. The act symbolically highlighted the limits of the MAS and the decolonization process under its former president, Evo Morales.

You might be interested in: The MAS Victory, The Coup, and the Fight for Socialism: Interview with a Bolivian Revolutionary

The uneventfulness of Sunday’s inauguration was in stark contrast to the growing right-wing offensive [Link in Spanish] in recent weeks. In the leadup to the inauguration, right-wing sectors in the department of Santa Cruz in particular had called for strikes, blockades, and a forensic audit of the elections, which they alleged to be fraudulent. Radicalize, racist, and clerical groups even called on the armed forces and the police to “save democracy. On Thursday, unknown assailants threw dynamite at the building where Arce was attending a MAS meeting. No injuries were reported.

Vice president David Choquehuanca, foreign minister in the cabinet of former president Evo Morales, sent reassuring and conciliatory messages to the opposition in his inaugural speech. Arce, in contrast, referred on several occasions to the coup d’état and the massacres that took place in November of last year. Arce had avoided these topics during his electoral campaign, referring to Añez as the “transitional president” and even affirming, in an interview last summer, that he recognized her as the constitutional president.

Arce’s inaugural speech was interpreted by much of the bourgeois press and the opposition as an attempt to sow hatred and “look back.” They overlook the fact that Arce and Choquehuanca referred to the need to “govern for all” and build bridges with the opposition. In the former’s words: “We must put an end to fear in Bolivia. I believe in justice, not in fostering an atmosphere of resentment and revenge that does not respect diversity of thought, where being from another political party makes you an object of hate. That must end.”

However, the MAS is taking power during a deep economic, social, and political crisis that the electoral results and the inauguration will not resolve. Bolivia’s GDP is expected to shrink by 11 percent this year in the next year, and Arce, unlike Morales, will not be able to build up support with the help of a huge surplus from the export of raw materials. Massive layoffs and cuts are taking place amid the threat of a new wave of coronavirus infections

The government will be harassed not only in parliament but also in the streets by an ultraconservative and racist Right. The violent police are still in place. Foreign imperialist powers will also retain their influence in Latin America through multinational corporations, international financial institutions like the International Monetary Fund, and military bases. The MAS may have beaten back reactionary and pro-coup forces for now, but these groups will strike again as soon as they get a chance.

Likewise, internal disputes within the MAS are beginning to emerge. The return of Evo Morales to Bolivia is another factor which reveals the contradictions within the party, as some tendencies think that this step is inopportune. In the coming days and weeks, we will begin to see more clearly how these contradictions develop.

Originally published in Spanish on November 9 in La Izquierda Diario.