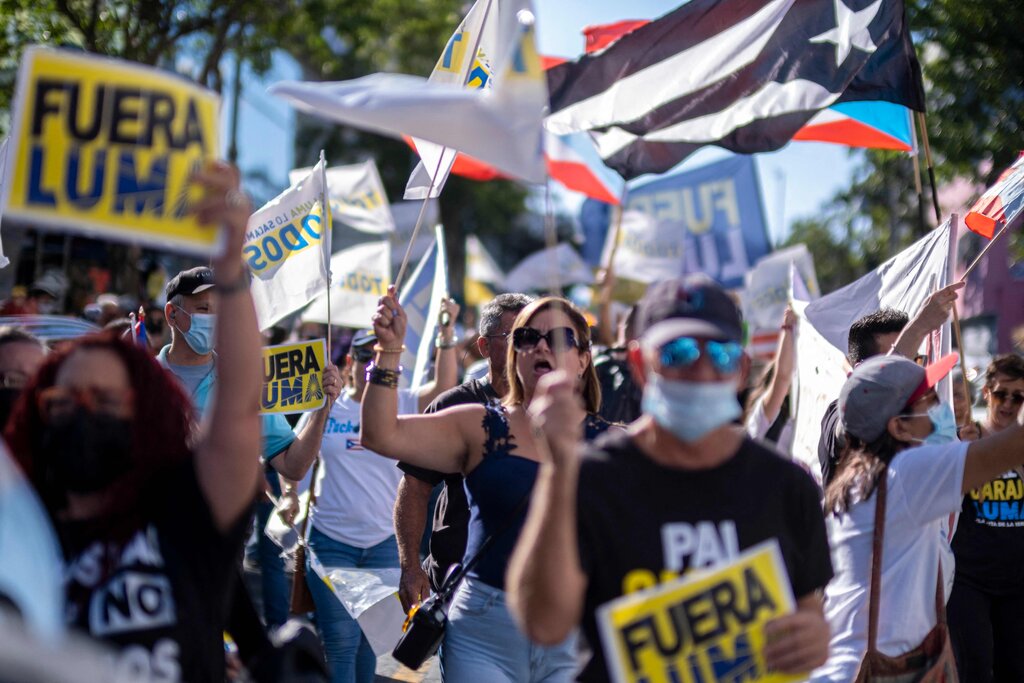 Thousands of Puerto Ricans took to the streets on July 20 to protest the privatization of electricity services. Their main demand is the cancellation of the contract granted to LUMA Energy, a joint-venture company created to administer power transmission and distribution in the island. Chanting “Ellos no saben lo que hacen, lo que hay es un desmadre” (They don’t know what they are doing; what they are doing is a mess), protesters marched through from the Capitol (the legislative assembly) to La Fortaleza (the governor’s residence).

People have seen seven consecutive price increases in their electricity bills, but the power service has not improved since LUMA took over in June 2021. Residents on the island constantly have to deal with unsteady power, low voltage, and massive blackouts. In April 2022. an island-wide blackout left 1 million people (a third of the island’s population), without power. Puerto Ricans have denounced these power outages and its effects before.

The Role of Governor Pierluisi

Protesters demanded Governor Pierluisi’s resignation because he recently vetoed a bill (Proyecto de la Cámara 1383; PC 1383) that would have prevented further increases in the price of electricity. The bill proposed to eliminate 75 percent of the debt held by the Puerto Rico Electric Power Authority (PREPA, or in Spanish Autoridad de Energía Eléctrica, AEE). PREPA is the public company that formerly administered all electricity services. But Puerto Rico’s electrical grid was privatized in order to suck more imperialist profits from the island. The profits of these increases in the electricity bill will be used to pay bondholders, according to the current Fiscal Plan designed by the Fiscal Control Board — an entity created in 2016 under the PROMESA Law to ensure the payment of Puerto Rico’s debt. The board also holds governing power above the legislature — it can nullify laws if they are incompatible with the debt adjustment plan. By guaranteeing the payment of the public debt, the board and its policies ensure that higher electricity prices will burden the poor and working-class citizens, who are already struggling in a precarious economy.

The public debt is a product of Puerto Rico’s colonial relationship with the United States. As such, it requires that the island government establish a mechanism to pay it. This is the debt adjustment plan, which perpetuates indebtment. It proposes cuts to the island’s government budget and threatens essential services and the means of economic development, including public education, health services, and utilities.

The PC 1383 Bill would have also protected PREPA workers’ retirement benefits. The bill would have prevented pension cuts of current employees and frozen pensions for future employees, keeping that money from being diverted to pay the public debt. About 18,000 families depend on PREPA workers’ pensions; these families’ economic security is now threatened while the electrical grid has been privatized.

Johnny Rodríguez, president of the Association of Retirees of the Electric Power Authority (AEE), denounced Pierluisi’s veto of PC 1383. “This ends this week or we end it,” Rodríguez told El Vocero, adding, “If you don’t want to suffer the same fate as [ex-governor Ricardo] Rosselló, cancel the contract.”

It is time to put the people before the debt. The debt should be canceled entirely and the imperialist Fiscal Control Board abolished. Efforts and monetary investment should be focused on constructing a public electric system that is reliable and of the highest quality. Austerity measures will further sink the economy of poor and working-class Puerto Ricans already struggling after the debacles of Hurricane Maria and recurrent earthquakes, the end of the Covid pandemic, and the costs of inflation.

Last week’s mobilization points the way forward. Puerto Rico needs a mass movement like the 2019 uprising, one that can fight imperialism and exploitation. Essential services should not be exploited for the economic benefit of the ruling class.