Luxury building workers and doormen from at least 3,000 buildings in New York City rallied on Wednesday and authorized a strike if they do not reach a deal on a new collective bargaining agreement. 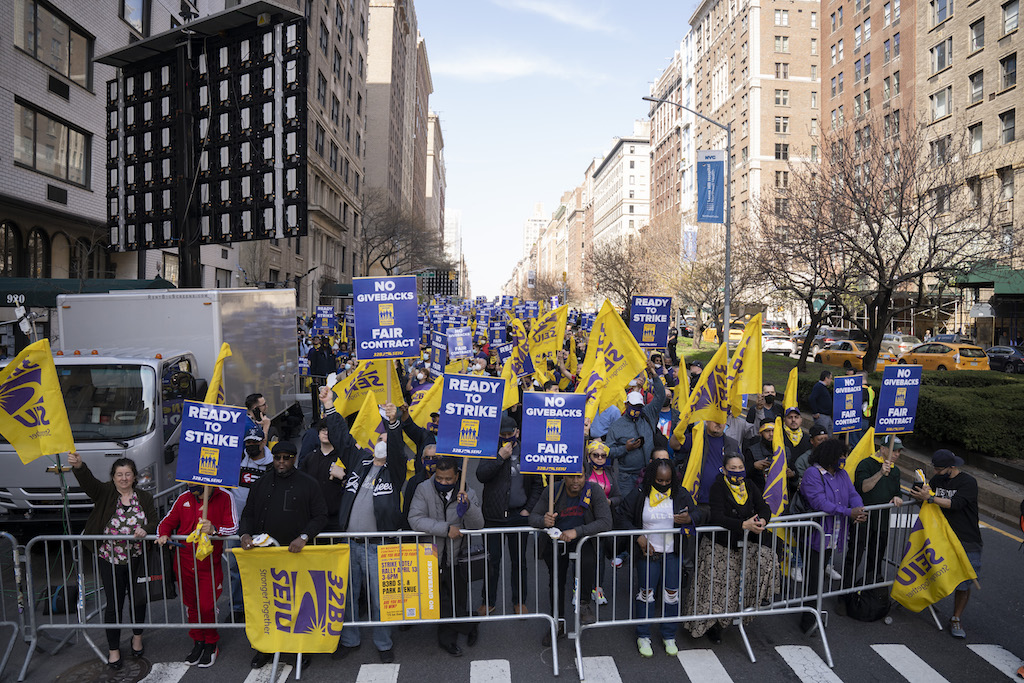 Thousands of porters, doorpersons, superintendents, concierges, and handypersons with SEIU Local 32BJ gathered on Park Avenue in Manhattan on Wednesday for a rally to demand a fair contract. These essential residential workers are currently in contract negotiations with the Real Estate Advisory Board and are demanding wage increases and fully employer-paid health insurance for their families.

The workers also raised the slogan of “no givebacks,” in response to bosses demanding they pay into their own health insurance and take cuts to paid time off. These workers deserve what they have already — and far more.

Indeed, these essential workers, who are predominantly Black and Brown, were on the front lines throughout the pandemic, putting their own and their community’s lives at risk every day. Ironically, many of them work in buildings on Billionaire’s Row, the area at the southern end of Central Park that’s home to many of New York’s wealthiest residents. While these millionaires and billionaires sat at home during the pandemic, they made record-breaking profits by exploiting the labor of essential workers.

The union contract covers superintendents, porters, handymen, concierges, and door attendants in properties owned by several landlords represented under the Realty Advisory Board on Labor Relations. The board has properties in Staten Island, Brooklyn, Queens, and Manhattan.

The last doorman strike in New York City was in 1991. Now, like many other workers in the United States, they’re demanding a wage increase “at least” tied to inflation, which in New York City sits at a rate of 5.1 percent.

These workers have the ability to unite their struggles with other sectors. They’re natural allies of the tenants who are fighting against landlord abuses in a city with an acute housing crisis, and against  Mayor Eric Adams brutalizing the unhoused.

These workers also have natural allies amongst essential workers as a whole. Building workers had to take on several roles as Covid lockdowns and kept families in their buildings. They became health aides, dog walkers, deliverers, and more. Now, they are demanding more from wealthy landlords to win better conditions for themselves.

As the rental market bounces back after the pandemic lull, wealthy landlords have caused rents  to soar: the median rent in Manhattan has an all-time high of $3,700/month. It’s unacceptable that the very same real estate giants that squeeze tenants in New York City to make record profits now say they are unable to pay the very workers who run these buildings.

Following Wednesday’s rally, workers voted to authorize a strike. If a tentative agreement isn’t reached by April 20 — the day their current contract runs out — 30,000 of these residential workers will go on strike. Workers, especially doormen, have got the support of the Teamsters, who represent UPS drivers, among other unions.

During the course of yesterday’s rally, Democratic party politicians took to the stage to show their solidarity with the workers. Yet time and again, these Democrats have shown that they are on the side of the bosses, not the workers. In fact, Chuck Schumer and Carolyn Maloney, two of the most prominent Democrats in the city who spoke at the rally, are close allies and beneficiaries of the Real Estate Board of New York (REBNY). Today, REBNY is notorious for fighting against tenant protections, affordable housing, and housing rights in general, all so that the real estate giants can continue to make megaprofits. Viewed in this context, these politicians’ support has nothing to do with the workers’ struggle, and everything to do with putting on a facade of progressiveness.

As Striketober showed us last fall, the strike is one of the most effective weapons in the hands of workers. If these workers were to go out on strike, it would affect operations in over 3,000 residential buildings in the city and over half a million apartment units, showing the strategic power these workers have.