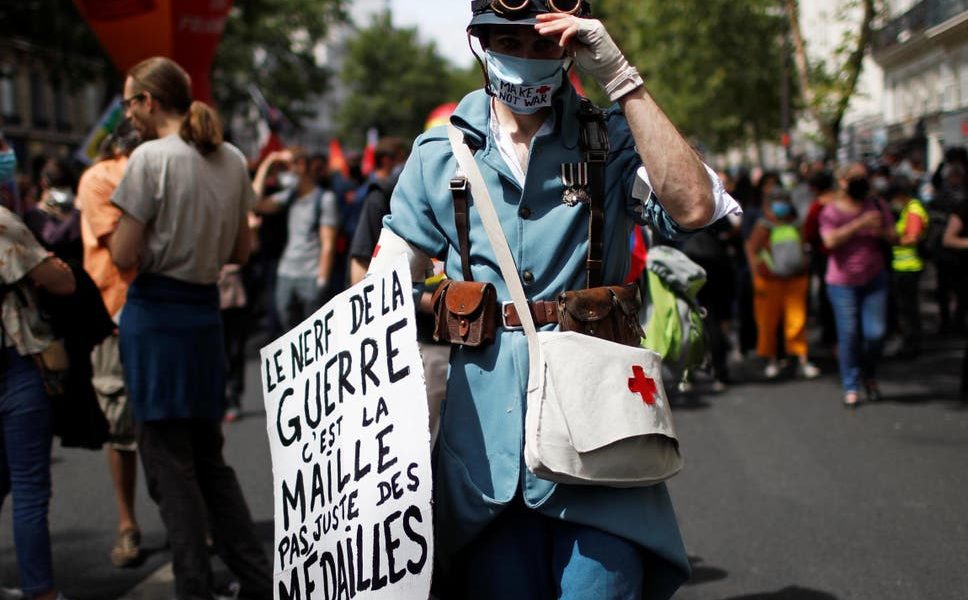 France celebrates Bastille Day on July 14, the anniversary of the French revolution. It was the day when the Bastille was taken by protesters, a historic that dealt a mortal blow to the monarchy in 1789.

In the midst of the coronavirus pandemic, President Macron promised to pay tribute to healthcare workers. So in this year’s  Bastille Day celebration, healthcare workers in white coats replaced the military in the parade, which was attended by Macron, as well as the head of the World Health Organization, Tedros Adhanom Ghebreyesus.. It was a cynical tribute from a p who has attempted to make working-class people pay for the economic crisis and has refused to adequately fund healthcare. But the event did not proceed without interruptions. Activists flew banners overhead which read: “Behind the tributes, Macron is suffocating hospitals” and “Savings cost us lives.”

While Macron held a parade for “healthcare worker heroes” these banners were released overhead by protesters: “Behind the tributes, Macron is suffocating hospitals” and “Savings cost us lives.” https://t.co/vsLIoz107J

In central Paris, protesters marched to the Bastille.  Workers spoke out against staff shortages, low wages, and overcrowding in hospitals.  Other protesters spoke against police violence and racism, some holding Black Lives Matter signs. Others wore yellow vests.

The protest took place one day after Macron and some unions agreed on contract, which is being touted as a victory because it gives healthcare workers a raise of $183 a month. However, for many it is too little too late: there is no increase in hospital beds and almost no increase in staff. The pay increases are minimal under any circumstances, but especially as healthcare workers battle the coronavirus.  “These salary increases do not match our demands,” Thomas Laurent, a nurse at a Lyon hospital and Inter Urgences union member, told France24. Some unions refused to sign this deal, also indicating that it was vastly insufficient in the coronavirus crisis.

Riot police surrounded the protesters and tear gassed the “healthcare heroes” that Macron pretends to support.

In the spirit of revolution! https://t.co/6nt3I7v2ct

Just a few weeks ago, a declaration by healthcare workers said: “The Covid-19 crisis has shown (if anyone was not yet convinced) that public hospitals are essential, and they need sufficient staff and equipment to meet the healthcare needs of the population.” It continued: “We have to stop closing hospitals and reducing the number of beds, because people need hospitals close to their homes. The government has given billions of euros to private companies, and it can do the same with public health care.”

France has seen more than 207,000 coronavirus infections over the course of its outbreak and had a death total of around 30,000 as of Tuesday.