Macron Pushes for New Government and Accelerated Reforms in Lebanon

Emmanuel Macron, who traveled to Lebanon for the second time since the explosion in Beirut, pressed for the formation of a new government to quickly impose reforms in exchange for international aid. His actions constitute imperialist interference. 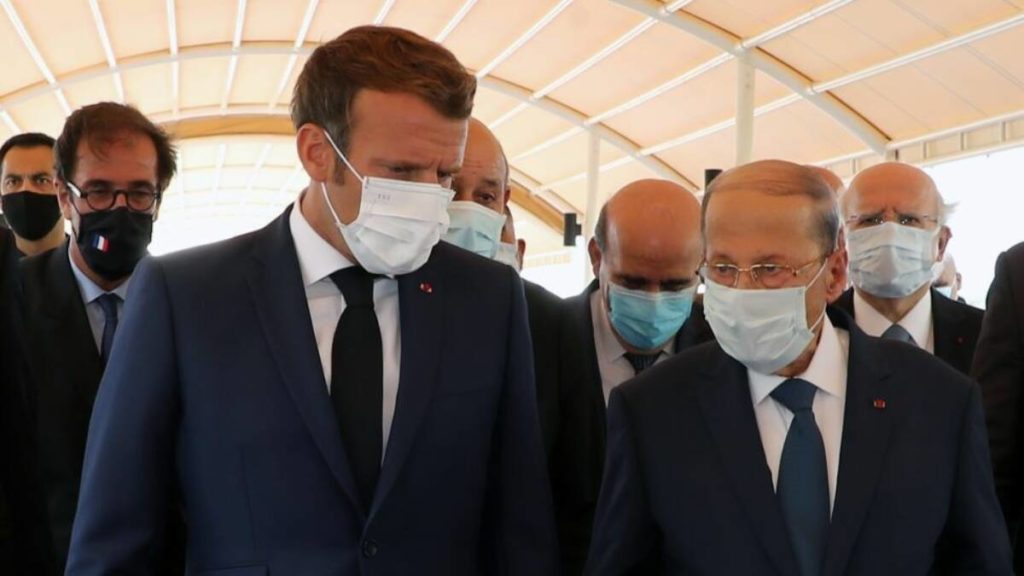 French President Emmanuel Macron traveled to Lebanon on Monday and Tuesday as part of his second visit to the country since the explosion in the port of Beirut in early August. His political and economic demands had a strong tone of imperialist interference.

Macron visited Lebanon to mark the 100th anniversary of the proclamation of the state of Greater Lebanon. During the visit, he promised international aid for the country, conditioned on the formation of a new government in the next few days and for the implementation of reforms in the coming weeks.

“All the political forces have committed themselves to form a government in the next 15 days,” the French president said in a press conference at the official French residence in Beirut.

Macron gave the speech at the official French residence in the capital, the same place where French general Henri Gouraud proclaimed the creation of Greater Lebanon under French rule on September 1, 1920, which lasted until Lebanon’s independence in 1943.

The French leader promised that he would convene an international aid conference for Lebanon in October but warned that he was not giving the country a “blank check.” Rather, the aid is contingent on political and economic reforms, beginning in the energy and banking sectors.

Macron was giving an ultimatum to the discredited Lebanese political class: If the reforms are not carried out, there will be consequences.

“If nothing has been done, I will have to tell the international community that we cannot help Lebanon,” the President added, in a speech dripping with imperialist threat towards France’s former colony.

Macron said that a roadmap has been drawn up to work on managing the consequences of the explosion, the reconstruction of the port, reforms and privatization of the electricity company, and capital controls, among others.

During his visit to Lebanon, Macron repeated that his position is to make demands without interference. However, the French president, who pretends to be the savior of the people, did not stop putting pressure on the local government.

“This is the last chance for the system,” Macron hammered. “I am here … to get results and bring about reforms.” He said he would press for the formation of a new government which will have to launch reforms as quickly as possible.

Emmanuel Macron has already announced that he will return in December. The announcement sounds like a deadline for the implementation of French imperialist policies. In comments broadcast by Le Point, Macron offered to organize a conference in support of Lebanon.

“We must continue to mobilize the entire international community. […] I am ready for us to organize, perhaps in mid-October, an international support conference with the United Nations. […] I am ready to welcome it even in Paris […], which we can again ask all states to support in order to finance,” declared the French president.

If Macron intends to present himself as the “saviour” of the Lebanese people, in the purest colonial tradition — France colonized Lebanon between 1920 and 1943 — he is, on the contrary, the worst enemy of the struggling masses today. Far from being motivated by humanist impulses, Macron’s demands above all serve the imperialist interests of France in Lebanon. The demands will result in the plundering of the country’s natural resources with the complicity of the Lebanese bourgeoisie. In this sense, the very nature of the reforms demanded by Macron is striking, like the privatization of the energy sector, which represents 40% of the country’s debt, since it is supported by “private organizations and French companies,” as he had indicated earlier in August.

His ultimatum, however, goes beyond the demands of the majority of Lebanese people who have long protested the government and Lebanese politics. Instead, he is accelerating the formation of a new government with the same parties and politicians who are being protested.

In fact, during his visit, there were successive mobilizations in Beirut around the Lebanese Parliament to protest against the appointment of the new Prime Minister. The demonstrators were repressed by police who were stationed behind the walls built to fortify the area around the Parliament.

The demonstrators, who called Tuesday the day of the “nation’s anger,” raised Lebanese flags dyed black instead of red.

The appointment of Mustafa Adib as the new prime minister, a man trusted by former Lebanese Prime Minister Nayib Mikati and ambassador in Berlin since 2013, has unleashed the wrath of the citizens, who are protesting to change the political system that has led to one of its worst crises in history.

French imperialism and its representative Macron do not in any way support the legitimate struggle of the Lebanese people.

This article was originally published in Spanish on September 2 in La Izquierda Diario, Argentina