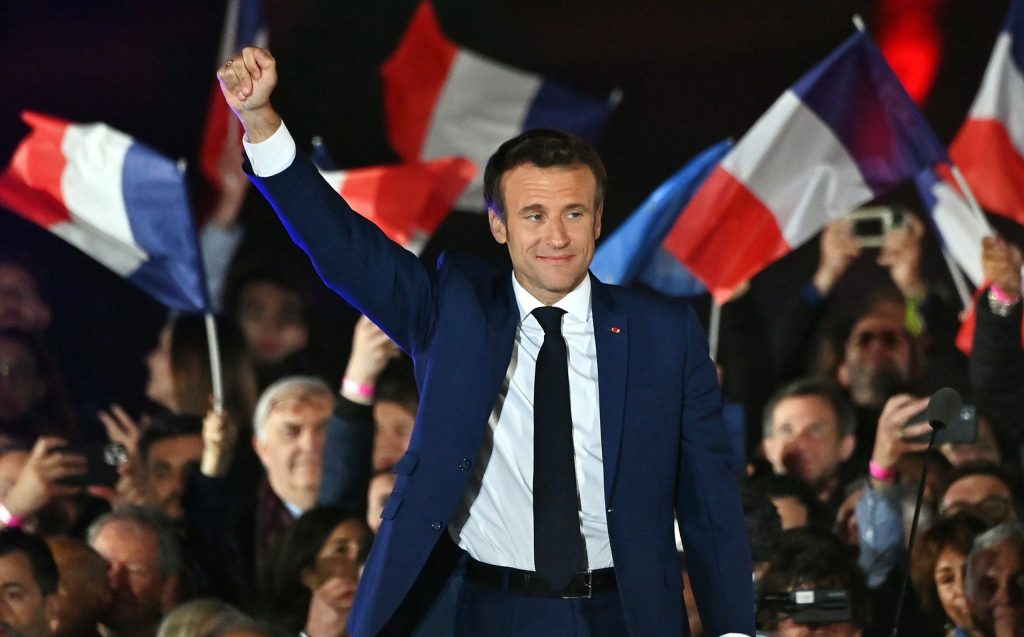 Emmanuel Macron was reelected to the French presidency on Sunday, winning 58.4 percent of the votes cast. Marine Le Pen took 41.6 percent. The victory, though, barely masks a massive abstention that hasn’t been this big since 1969 for a second round of the presidential election. Some 28.2 percent of the French electorate abstained (which in France is almost always a conscious political choice), an increase from the 25.3 percent of 2017, and 6.4 percent of ballots were blank or void. Above all, this vote does not reflect genuine support for Macron’s agenda, but more of a vote to block Le Pen.

This makes Macron the president elected with the weakest support of any president since the Fifth Republic was established under the new constitution in 1958.

The president is perfectly aware that he suffers from a legitimacy deficit. It’s why commentators and people close to him have been repeating the same formula on all the TV shows: “Emmanuel Macron is the first president of the Fifth Republic to be reelected without cohabitation” — the French term for divided government — at a moment when legislative elections are only seven weeks away. This is an effort to paint Macron’s victory as some sort of achievement and sweep the reality of the ballot totals under the rug.

Pressure to block the Far Right became far greater in the period between the first and second rounds, with calls from political groups and trade unions to vote Macron or at least not to vote for Le Pen, but the results still reveal the deep crisis of this effort to build a “dam” against the Far Right candidate. Le Pen still garnered a historically high vote total as she capitalized on the visceral rejection of Macron’s policies. She won a strikingly high total of votes in the West Indies, for instance, where Macron had brutally repressed objectively anti-colonial mobilizations.

The challenge for Macronism will be to govern the country with such a weak social base and an agenda to continue its war on the social gains of the French population. To the degree that Macron tried to imply otherwise in his victory speech,but the truth is that 80 percent of the electorate did not vote for him, or did so only by default.

“What worries me most, beyond Sunday’s results, are the five years to come” explained a minister a few days ago, Mediapart reported.

Jean-Pierre Raffarin, prime minister during the presidency of Jacques Chirac, put it this way: “Macron II will be different from Macron I. He must be as mobilized on politics as on the economy. His agenda could become that of an ‘augmented Fifth Republic’: we must shift the debates to the political sphere to avoid fighting in the streets.”

In his victory speech, Macron expressed his desire to bring people together. But that’s wishful thinking that won’t last long. With measures such as raising the retirement age to 65, compulsory work for unemployed and underemployed recipients of the Active Solidarity Income (RSA), doubling the number of cops on the streets, a new effort at pension reform, and continuing the Islamophobic offensive, the next five years will be explosive — and we must be prepared.

Building a Bloc of Resistance

Macron aims to refurbish his methods and pick up his generalized social offensive where he left off. This explains why he put highlighted intermediary bodies between the first and second rounds of the elections, promising, among other things, a major conference dedicated to financing “social progress” as a way to postpone raising the retirement age. While the trade union leaderships have sent lots of favorable signals about this proposal, multiplied the favorable signals in this sense, it is crucial that we refuse to fall for this “social dialogue” trap. What we need instead is a battle plan that is up to the task of fighting the coming government attacks!

For its part, the Popular Union — the electoral coalition led by the social-democratic populist party La France Insoumise (LFI, Unbowed France or Unsubmissive France) — emphasized the “third electoral round” and the perspective of the legislative elections on June 12. This was reaffirmed by Jean-Luc Mélenchon, the party’s presidential candidate (who polled 21.95% in the first round, just behind Le Pen) on Sunday evening.

Mélenchon, who has made the call for a Sixth Republic and the fight against the “presidential monarchy” one of his favorite topics, seems to have come to believe that, in the end, it is the prime minister who possesses all the power in the Fifth Republic. His gamble of becoming prime minister through the legislative elections — a wholly institutional gamble — is a dead end in the face of the coming attacks.

There are tremendous class-struggle battles on the horizon; it is inevitable. This makes it urgent to provide the working class with a program and strategy up to the task, and to prepare a social “third round” in the streets, through mobilization. In the last five years, it is our class that has made Macron’s government tremble and forced him to back down. Now, it is urgent to build a bloc of resistance that can oppose Macronism head-on and be prepared for a response on the ground, through strikes and demonstrations.

First published in French on April 24 in Révolution Permanente.