Macron: The President Who Deports Immigrants but Celebrates Their Goals 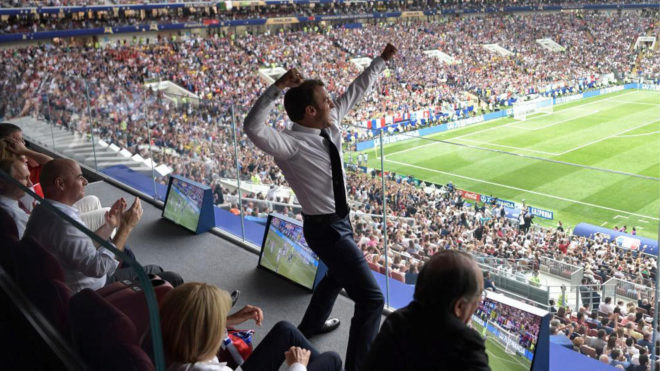 The president Emmanuel Macron, celebrates the triumph of the French soccer team at the World Cup. Getty Images.

The French soccer team, recently crowned World Cup champion, fills its ranks with immigrants and the children of immigrants. Yet, while the French government persecutes and deports immigrants, French president Emmanuel Macron builds an imaginary national unity with soccer euphoria.

During the semi-final match between France and Belgium, President Emmanuel Macron was seen heartily celebrating a goal scored by Samuel Umtiti, the French team’s defender, who was born in Cameroon in 1993. Eighty-two percent of the French team’s players, which defeated Croatia in the final match of the FIFA World Cup in Russia, have origins beyond the French borders.

Only four of the 23 players have two French-born parents, among them the team captain, the goalie Hugo Lloris. Kylian Mbappé, one of this World Cup’s stars, has African parents: his father is from Cameroon, and his mother is from Algeria. Twelve other players are of African heritage: Ousmane Dembélé’s father is Senegalese, and his mother is Mauritanian; Paul Pogba’s parents are both from Guinea; Nabil Fekir’s are Algerian; N’Golo Kanté and Djibril Sidibé have Malian ancestry; Benjamin Mendy’s ancestry is Senegalese; Blaise Matuidi’s is Angolan; Adil Rami was born in Morocco and raised in the Democratic Republic of Congo, as was Steven Nzonzi’s father.

Others, like Raphaël Varane and Thomas Lemar, have roots in the French Antilles (Martinique and Guadeloupe). Presnel Kimpembe has a Haitian mother, and Alphonse Areola’s parents are from the Philippines, being the only one with Asian origins. But all of them were born in France. Along with Umtiti, the substitute goalie Steve Mandanda, born in the Democratic Republic of Congo, are the only players born outside France.

Racism is no stranger to French World Cup players. A little over a decade ago, there was the infamous episode when Zinedine “Zizou” Zidane, a player of Algerian ancestry born in Marseille, was given a red card for head-butting the Italian defender Marco Materazzi after he insulted Zidane’s origins.

Macron’s hypocrisy is evident for anyone to see. In May he granted French citizenship to Mamoudou Gassama, a young Malian who became famous when a video surfaced of him saving a boy who was about to fall from a balcony.

But citizenship to a few public figured cannot erase the imperialist French government’s persecution of immigrants, especially those from Africa and the Middle East. The French government locks them up in inhumane detention centers where they suffer from horrendous living conditions and abuse at the hands of prison guards. For example, in a migrant camp called “the Jungle”, near the British border, the government tore up the migrants’ tents. On the other hand, others are deported under the pretense of “protecting” the nation from terrorism.

For several months, Macron’s government has been preparing a law that proposes to speed up the deportation of those who cannot prove they are refugees and of economic migrants who lack the appropriate documents. Macron’s government has been working on agreements with migrants’ countries of origin for their repatriation, as well as prolonging the administrative detention period up to 90 days.

Only in 2017, 26,000 people were deported from France, 14% more than the previous year under the “socialist” president François Hollande. During Macron’s time as president, the number of foreigners rejected at the border skyrocketed from 63,732 in 2016 to 85,408 in 2017. That is almost 22,000 more deportations.
Early this year, Macron visited the immigrant detention center at Calais. Sounding like a member of Marine Le Pen’s far-right National Front, he boasted of having expelled immigrants and supported the police repression of foreigners.

Recently, Macron and German Chancellor Angela Merkel announced an agreement on migration policy that will toughen anti-immigrant measures and strengthen the EU’s borders to prevent immigrants from requesting asylum in many countries, not only in the ones they enter.

But for the time being, the president of colonialist France is wearing the national team’s shirt and celebrating their victory by building an illusion of “national unity.” It will not last long. In the peripheral “banlieues” of Paris, immigrant children will continue to be harassed and persecuted by the police. At France’s borders, they will simply be deported.