Marcello Pablito: “On May 1, We Remember Our History of Struggle”

In a speech given at the international rally of the Trotskyist Fraction this May Day, Marcello Pablito, a leader of the Revolutionary Workers Movement (MRT) and the afro-socialist group quilombo vermelho, denounces the right wing government of Jair Bolsonaro for racist and antiworker attacks during the pandemic. He speaks about how Black people in Brazil are most at risk of both infection and state violence during the pandemic and how a united working class is the only solution the present crisis. 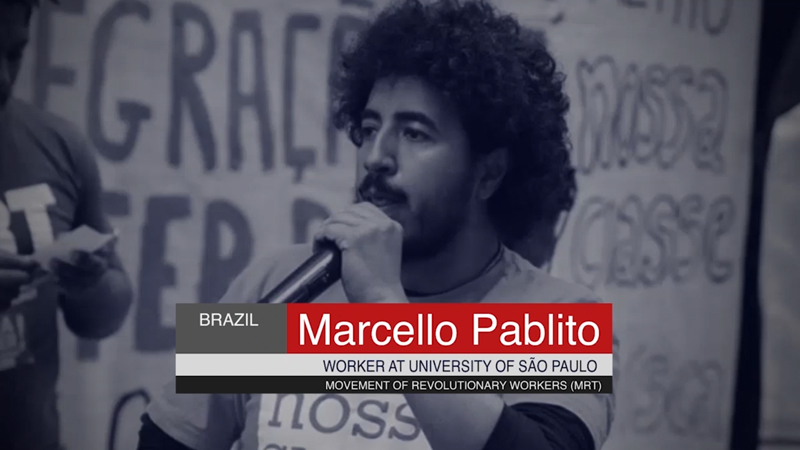 Marcello Pablito is a cafeteria worker at Sao Paulo University Hospital and one of the leaders of the MRT. He is also a founder and leader of the MRT’s Afro-socialist group, quilombo vermelho.

Greetings from Brazil to all the workers who are on the front line of the crisis. I would like to send a greeting from my co-workers from the Hospital at the University of São Paulo who organized an action this week in defense of workers’ lives. I would also like to welcome everyone who is watching this rally.

We are experiencing a huge political crisis here in Brazil with the ultra-reactionary government of Jair Bolsonaro. He is Donald Trump’s bootlicker and a misogynist, racist, homophobe, and transphobe who hates all workers.

When the pandemic began, Bolsonaro said that “Brazilians could dive into the sewer without facing any harm.”  But in Brazil 30 million people don’t even have access to drinking water. It’s predominantly Black people who are dying as a result of this pandemic.

Bolsonaro and his vice president, General Mourão, have shown support for Brazil’s former military dictatorship. Just a few days ago, Mourão made a statement supporting the military coup of ‘64, which killed, tortured, and disappeared thousands. Bolsonaro also has the support of the military, which took over security in Rio de Janeiro, increasing the violence against poor Black people. He has the support of Paulo Guedes, an ultra-neoliberal figure who supported antiworker measures aimed at making the working class pay for the crisis.

Last week judge Sergio Moro resigned from the government. He was trained by the US State Department and was in charge of Operation Car Wash, which brought about the coup in 2016 that ousted President Dilma Roussef. Moro was a figure who played a key role in the arbitrary arrest of former President Lula.

Moro, a representative of the right wing coup, wants to distance himself from Bolsonaro, pretending to have a “rational” approach to the crisis, all while supporting the agenda of attacks against workers. That’s why socialists should have no confidence in the Congress, the judiciary, and antiworker governors!

But at this moment of increasing attacks against our class, we need to ask ourselves: What are the main unions doing? They are in quarantine, silent in their homes, or even supporting attacks against the workers. And on May Day, they are sharing the stage with bourgeois politicians, who are enemies of our class.

That’s why, now more than ever, we need to retake the unions into the hands of the working class and prevent this sold-out bureaucracy from hindering our organization and our unity. We need to fight for precarious, sub-contracted, and young workers who spend twelve hours a day on a bicycle doing deliveries. We need to defend immigrants who are being humiliated or killed at the borders, like at the Venezuelan border with Brazil.

Part of this bureaucracy is supported by the Workers Party, which calls itself an opposition to Bolsonaro, but when they were in government they implemented attacks and privatizations as well. Lula himself boasted that bankers had never made higher profits than during his administration.

The fight to oust Bolsonaro has gained the support of millions and can defeat this reactionary government. But, at the same time, there is a risk that comes with the call to oust Bolsonaro. There are wings that point to a government headed by General Mourão as a way out; unfortunately, this includes sectors of the left that are demanding Bolsonaro’s impeachment or resignation.

Instead, we have to demand the ousting of Bolsonaro, General Mourão, and the military.

In this sense, we also call on all the socialist organizations to put up a strong left-wing block that calls for the overthrow of Bolsonaro, but one that does not leave our class in the lap of a right-wing military general.

This is even more important at a time when the Workers Party has already shown that it wants to save the regime, but just by changing the players. Their only alternative is the hope that the Workers Party will be voted into office in 2022, or paving the way for Mourão by defending the policy of impeachment without questioning the totally undemocratic and authoritarian regime that we live under.

Therefore, for socialists it is not a question of exchanging one administration for another. It is necessary to bring down this regime and for that to happen there is no alternative but for the people themselves to decide our future. So, when we fight for the ousting of Bolsonaro and General Mourão, we also fight for a Constituent Assembly, which is free and sovereign and can discuss the biggest problems of our country and take steps to protect the most exploited — a Constituent Assembly that is not limited by the forces that were accomplices during decades of attack and degradation of the politics of our country.

This process should point to a path to overcome the limits of this rotten and degraded democracy that we live in, so that workers can come to the conclusion that it is necessary to fight for a government of the workers that breaks with capitalism. Otherwise, we will continue to experience this capitalist misery. And we will be forced to hear Bolsonaro use Marielle Franco’s name for his own ends. Bolsonaro, keep Marielle’s name out of your mouth. We fight for justice for Marielle, who is a symbol of the struggle of Black women in our country, where Black women earn 60% less than white men. Brazil’s slave heritage and racism continues to serve capitalism.

On May 1st, we want to remember our history of struggle, from the beginning.

The history of those who rose up against slave masters, as in Haiti where enslaved people carried out the first and only black revolution in history. As Karl Marx said: “Labor in the white skin can never free itself as long as labor in the black skin is branded.” On this basis, we fight for the unity of the working class.

And with hundreds of workers we have organized in workplaces and with Esquerda Diário which reaches millions with a single voice so that the capitalists will pay for this crisis.

These are some of the steps that we have been taking to fight for the construction of a revolutionary, internationalist party that fights for rebuilding the Fourth International!