On October 4, more than 60,000 took to the streets in an anti-austerity protest outside the Conservative party’s annual conference in Manchester, sending a strong message to the government against the harmful cuts and the Trade Union Bill’s attack on the rights of working people and their unions. 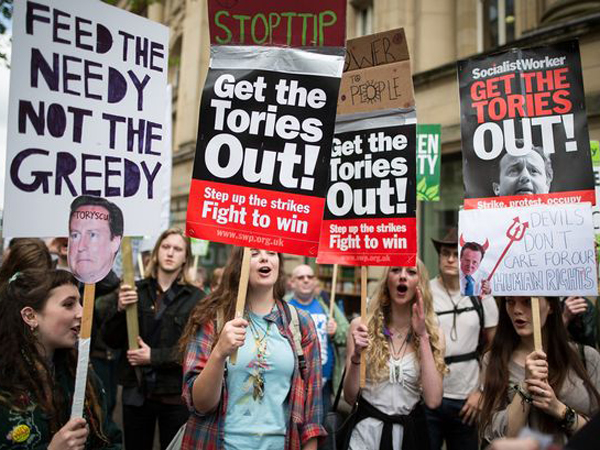 The Trades Union Congress (TUC) called the national day of action to oppose the government’s ideological agenda of cuts and privatisation, off the back of the 250,000-strong demonstration in London on June 20.

The “No to Austerity, Yes to Workers’ Rights” demonstration was a chance for dozens of thousands to focus their collective anger at the Tories by marching close to Manchester Central, where their annual conference was being held. The march was also seen by many as an opportunity to amplify the mood expressed in Corbyn’s victory in the Labour leadership contest.

Thousands booked their seats in the transport organised by trade union activists and anti-austerity campaigns from all over the country. The buses set off at dusk from different cities to gather in Manchester central by midday.

On that sunny autumn day, Singer Billy Bragg performed a warm-up set for the crowd, changing the lyrics of his best-known songs to add references like, “Take the money from Trident and spend it on the NHS,” and “These Tory cuts will get me the sack.” Bragg also performed Joe Hill’s “There is power union,” with the powerful first lines:

Now the lessons of the past were all learned with workers’ blood
The mistakes of the bosses we must pay for
From the cities and the farmlands to trenches full of mud
War has always been the bosses’ way, sir

Large delegations of public sector workers, teachers, health workers, transport and railway workers and other industries winded their way through the city’s streets of Manchester holding placards and chanting slogans against the cuts. Some were pushing prams, others in wheelchairs and there were thousands of pig-headed protestors in reference to the pig-gate surrounding the prime minister and his involvement in a secret society during his university years.

The rally began after midday in bright sunshine – with many holding banners from the country’s biggest trade union, Unite. Its general secretary Len McCluskey told the rally that the protest was “sending a very clear message to this Tory Government. If they think a fluke victory in which 75% of the electorate did not vote for them gave them a mandate to continue their cuts then they’ve got another thing coming. If they think they are going to have a smooth ride over the next five years, they’ve got another thing coming.”

The Prime Minister is pushing an attack on trade union rights. The Trade Union Bill will introduce minimum thresholds on strike calls and unions will have to achieve at least a 50 per cent turnout for a ballot to be legal. In addition, in key public services, such as health, education, the fire brigade and transport, any industrial action must also be supported by at least 40 per cent of those entitled to vote. This is ironic, coming from a government elected with less than 24% of the British population’s vote. The same government has set out plans to slash welfare by £12 billion, abolish maintenance grants for the poorest students and clamp down on the right of trade unions to take strike action.

The protesters walked through the city shouting, “Tory scums” as they passed by the Conference, where a “ring of steel” had been built around the conference venue and the nearby Midland Hotel. A colourful moment was when a young conference delegate was hit by an egg as the demonstration made its way through the city centre.

Students’ unions from around the country took part in the demo. Several universities have agreed that one of their priority campaigns is to resist austerity and join the national movement against it; fighting for a fairer, more just and more economically literate approach to public finances. Large delegations of students marched through the city shouting, “No ifs, no buts, no education cuts,” holding banners with the slogans, “We want living grants for all, so that no student has to live in poverty,” and “We don’t just want lower tuition fees, we want the abolition of tuition fees altogether.”

The place for the demo is highly symbolic. Manchester was the first industrial metropolis and it was the centre of the cotton and textile trade during the 19th century. Those who worked in the cotton mills – mainly women and children –had no union protection against excessive work, hazardous conditions and low pay. It was in Manchester where the first trade union was created and the TUC was founded. Friedrich Engels wrote Conditions of the Working Classes in England, inspired by the situation of the industrial working class in Victorian England. Here, he compiled his own experiences and argued that the Industrial Revolution left workers worse off and reported that in large industrial cities, mortality from disease was four times that of the surrounding cities.

It was a huge demonstration. It was a strong message. Around 60,000 people walked thorough a city, encapsulating a proud working-class tradition.