They’re Coming For Gay Marriage, Too

A right-wing Supreme Court threatens recent gains for queer Americans. We can’t leave the fight for queer liberation to the electoral arena. 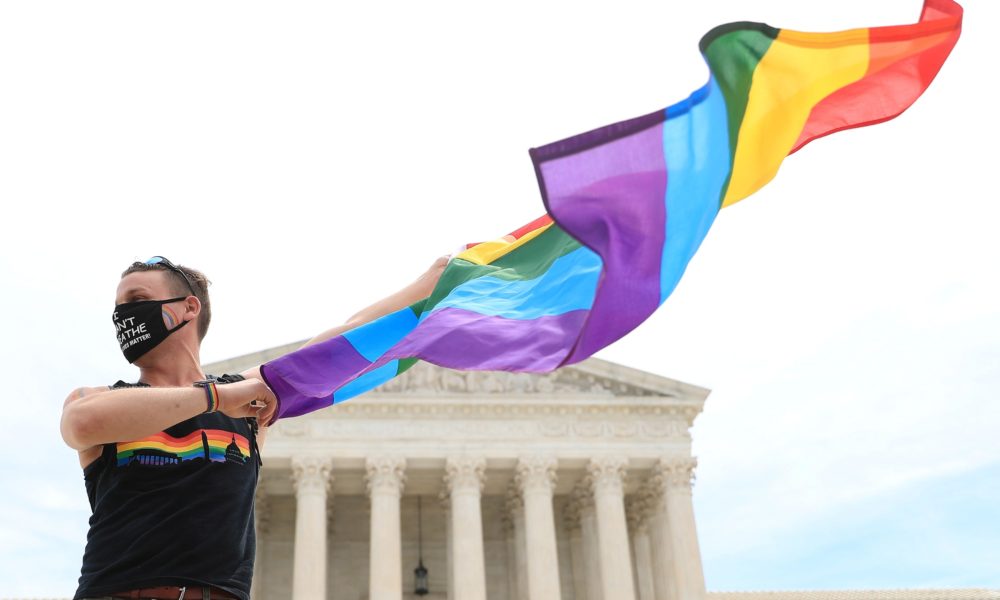 The death of Supreme Court justice Ruth Bader Ginsburg is raising questions about the future of marriage equality in the United States, questions that, for most people outside of religious circles, seemed firmly settled. It’s been half a decade since Obergefell vs. Hodges permitted same-sex marriage nationwide, and none of the calamities predicted by the promoters of “family values” have come to pass. Indeed, many same-sex couples have become the new hyper-visible faces of family values. Marriage equality, workplace protections, hate crime protections, and the right to serve openly in the military have all been secured. Queer people, it seems, have won the right to participate in the capitalist order on equal terms.

Unfortunately, the wildly undemocratic nature of the Supreme Court could soon upend this.

While much ink has (rightly) been spilled over the future of abortion access, there are clear signs that Obergefell is in the court’s sights as well. Three of dissenting justices are still on the court, and this past Monday, Clarence Thomas confirmed in a rabid concurrence that he has not forgotten his objections to that case. He points to the dismissal of Kim Davis as confirmation of his own apocalyptic predictions about Obergefell’s dire consequences for ‘people of good will’. Without saying so outright, his short screed clearly signaled that he (along with Alito) is more than willing to overturn Obergefell if given the opportunity. A court stacked with another Trump appointment, which is already more willing than ever to overturn established precedent, could easily sweep away Obergefell, flinging many thousands of queer Americans back on the the wild patchwork of state-by-state marriage laws that Thomas apparently pines for. For the hundreds of thousands of same-sex couples who have married since 2015, such a reversal could have unpredictable and potentially devastating consequences.

In capitalism, marriage is not just a site of loving companionship, but a vehicle for basic rights, including the right of undocumented people to stay in the United States, to access health insurance, to be recognized as a co-parent, or to be considered “family” in the hospital.

Of course, familial bonds are very real and can be very strong; however, socialists should not confuse that reality with the ideology of the family that capitalism uses to sustain itself. By elevating the “sanctity” of the family above all else, capitalists can displace onto families the cost of the working class’s reproduction. To argue that families are God’s Will, or Nature’s Way, is much cheaper than ensuring the health, housing, safety, and happiness of the workers whose labor produces capitalists’ profits. Even before same-sex marriage was legalized nationwide, there was clear evidence that the cost of reproduction can be displaced on to families headed by same-sex couples as easily as on patriarchial Christian families. Capitalists can rely on queer families to shoulder their costs as well as any others. This is why, despite conservative and religious-based opposition, extending the legal family structure to queer couples poses no threat to the social order.

Luckily, there is widespread support for same sex marriage, which could dissuade an increasingly right wing court from striking it down outright. Despite efforts to appear above the fray of politics, the court is a deeply political institution which generally moves in line with the dominant ideology. Even the court’s most committed textualist frets over the possibility of its decisions causing “significant social disruption,” and is willing to employ legally baffling logic in order to reach a popular outcome. It seems unlikely that this younger, more nakedly political court would risk the unrest that overturning Obergefell would cause. After all, the gay wedding industry is a mass money making machine, and mass sectors of the capitalist class support same sex marriage. It even allows capitalist institutions a cover of ‘wokeness’:  corporations can hyper-exploit workers while claiming a progressive mantle by granting limited LGBT workplace protections. It’s not an accident that marriage equality, which costs capitalists nothing, has become so quickly and widely accepted, while more costly, material steps towards queer liberation remain pipe dreams.

However, what we do have, we should fight to keep: If same-sex marriage is on the table, mobilizations are the only way to defend this basic right. Queer families — which existed before being granted legal and economic recognitions, and will continue to exist if those are taken away — must be defended fiercely in the struggle for liberation. Tossing out Obergefell will not cause any relationships to simply vanish, but because it may rob them of the material benefits currently associated with marriage, so we must do whatever we can to protect those benefits — regardless of what a court decides.

No matter the fate of Obergefell, the lesson for queers is clear. By tethering so much of our basic life security to a small family unit, we risk those things being taken away with the stroke of a pen. The economic ‘families’ on which many people depend are socially and legally defined; a slight tweak of the definition, then, can have potentially enormous consequences. This throws a sharp light on the inexcusable ability of the Supreme Court to waffle on millions of people’s basic civil rights. It is absurd that a small shift in personnel on a nine-member panel could call into question the right to marry, the right to an abortion, and more.  Tens of thousands of queer people’s economic security should not be tied to marriage, and basic civil rights should not be decided by the Supreme Court. The material gains granted by Obergefell and  the recent consolidated cases on workplace discrimination significant because they protected queer minority populations from the oppression of more powerful groups: states with a conservative majority, for example, could not vote the right to same-sex marriage away, and corporations with bigoted leadership could not discriminate against their queer employees. It is ironic, then, that these rights and protections are subject to the vote of nine unelected people.

We may soon need to fight again for the basic right to marriage equality. But, queer politics whose only goals are recognition and equality under capitalism are ultimately both boring and strategically bankrupt, no matter how much rainbow glitter one covers them in. For poor and working class queers, the benefits of marriage equality are not enough. Equality under capitalism is no equality at all; inequality and exploitation are baked in, and will always surface in one form or another. Rather than demanding a queer-friendly version of capitalism, queers must locate ourselves inside the structures and institutions that will destroy and replace it. Rather than electing bourgeois politicians who (we hope) will nominate judges who (we hope) will protect our rights, we should be fighting for our own liberation as a part of the working class.