Marx Was Right: Reflections on the Imperialist Oil Crisis

What can Marxism tell us about the current oil crisis? 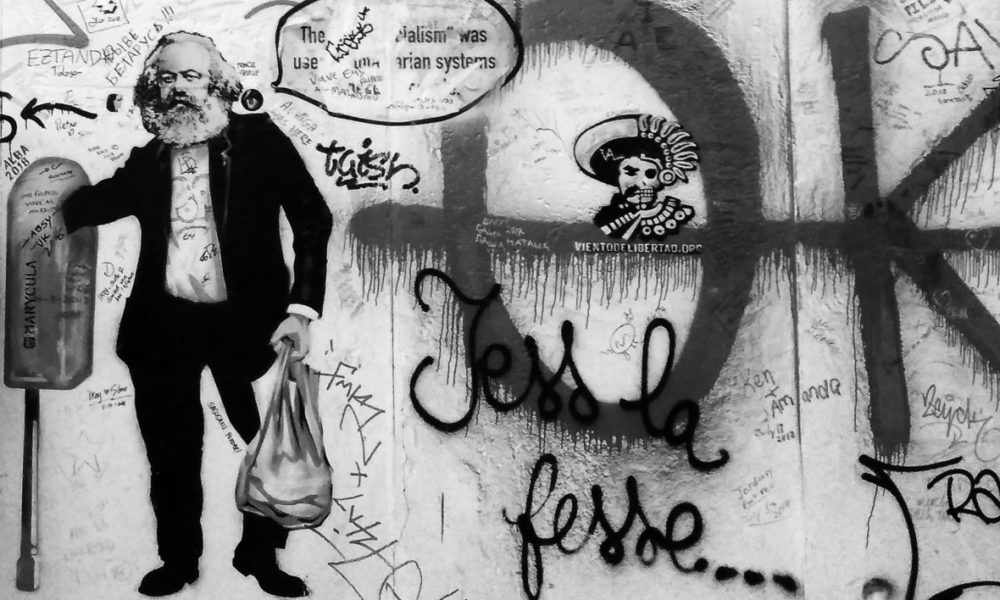 Much has been said about the oil crisis. An unprecedented crisis has caused a 300 percent drop in the value of West Texas Intermediate (WTI) “black gold” — that is, to a negative value of –$37.63 dollars per barrel. This fact is the new poster child for the capitalist system’s irrationality — sellers have had to pay buyers to take their oil. The situation is such that May WTI futures contracts hit a record low of $1.02 per barrel.

Several analysts point out that the oil companies cannot store all the barrels of oil already extracted. The U.S. Energy Information Administration (EIA) notes that crude oil reserves increased by 19.25 million barrels last week. Rystad Energy estimated that the reserves would have increased to a total of 23.7 million barrels by April 17.

Faced with this situation, Stephen Schork, editor of the oil-market newsletter The Schork Report, said he expected U.S. storage capacity to be exhausted within two weeks. “Whatever production we are cutting back on is not going to offset the demand destruction,” he told Bloomberg. 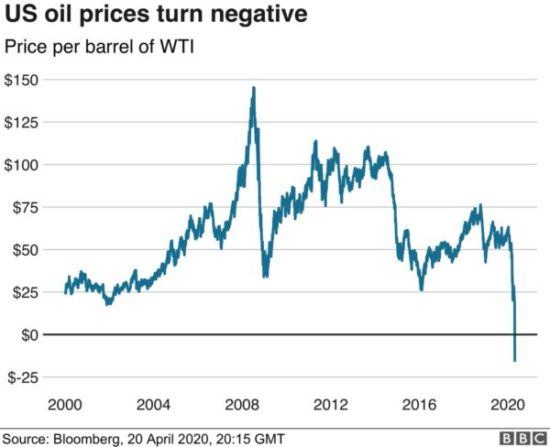 But you don’t have to be a specialist to realize that oil stocks are overflowing, especially when Amrita Sen, director of Energy Aspects, openly told the Financial Times that oil is being stored on a large fleet of ships drifting around the world. “With Brent you can put it on ships and move it around the world immediately. Storage tanks at Cushing, however, will be full in May.”1 We ought to be on high alert, evaluating the potential ecological impacts of what the oil capitalists are doing.

While we have differences with Argentine economist Rolando Astarita, what he writes in his blog is nonetheless interesting: 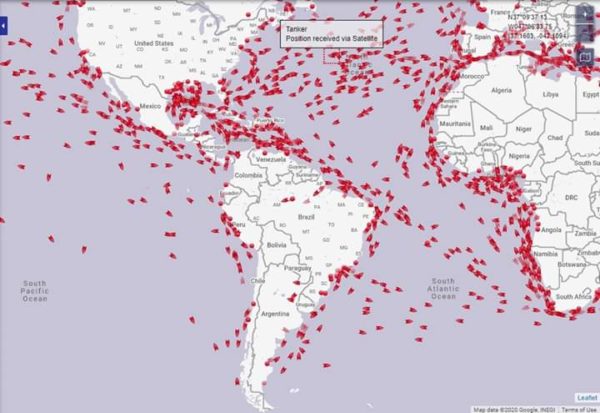 So far, the only rebound was a small one for WTI on April 21. But it was only a marginal recovery that kept crude oil at a negative price of –$4.72 dollars.

There are three keys to this oil crisis. First, the COVID-19 crisis has led to a fall in global demand for oil and has shut down exchanges on the international markets, on a par with the international economic crisis currently underway. Second, there is overproduction and disputes among the oil-producing countries, creating oceans full of ships moving tons of oil aimlessly around — and no agreement among the countries of the Organization of Petroleum Exporting Countries (OPEC) about what to do. Third, there’s not enough storage space.

Analysts, economists, and various businessmen have had to resort — quite uncomfortably — to Karl Marx to find explanations for the oil crisis. In fact, when the value of oil went negative, the surname of one of the founders of communism was trending worldwide on Twitter. It almost seems as if Marx is getting the latest Twitter updates on his cellphone when he explains:

If the capitalist has converted the capital advanced by him in the form of means of production and labour-power into a product, into a definite quantity of commodities ready for sale, and these commodities remain in stock unsold, then we have a case of not only the stagnation of the process of self-expansion of his capital-value during this period. The costs of preserving this supply in buildings, of additional labour, etc., mean a positive loss.2

Behind the Crisis: Oil Is One Domino In a Long Line

The International Monetary Fund (IMF) and central banks last year predicted a global economic crisis for 2021–2022, which only accelerated with the arrival of COVID-19. In that context, oil falling to a negative value, coupled with its overproduction, is a strong signal that the economic crisis already underway will become even more acute, and that it will have an even worse effect on the countries that depend economically on the imperialist powers.

Kristalina Georgieva, the IMF managing director, said recently that the coronavirus crisis “has disrupted our social and economic order at lightning speed.” The IMF had expected positive per capita income growth this year in 160 of its 189 member countries. Now that number has been reversed, Georgieva stated, and the IMF is projecting that more than 170 countries will have negative growth. At the same time, the United States — one of the main imperialist powers — has 26 million unemployed in just that one country. This forbodes a crisis worse than the economic crisis of 2008 and as deep as the Great Depression of 1929.

This information must be considered alongside the figures provided by the International Labor Organization (ILO), which announced that more than a billion workers in the world are in danger of losing their jobs or suffering a reduction in their wages. The ILO  further states, “More than four out of five people (81 percent) in the global workforce of 3.3 billion are currently affected by full or partial workplace closures.”

What do these data have to do with the oil debacle? In short, oil is one of the links in the chain of production that is affected by the cycle of capital crises, like a long line of dominoes or the collapse of a house of cards. The frenetic rhythms of competition among the various capitalists to accumulate more capital lead to all sorts of phenomena that break down the momentary illusion of economic equilibrium. As the late Belgian economist Ernest Mandel wrote, “When the distribution of productive forces no longer corresponds to this division in wants, the economic equilibrium is destroyed and both overproduction and underproduction appear side by side.”3

The oil crisis makes it clear that the capitalist production model cannot regulate itself. Rather, it is a completely dispersed system that leads not only to periodic economic crises, but also to the deterioration of many spheres of society. One such example is also the most obvious one today: the health systems on an international scale.

On this point, Mandel — as if coming back to life — seems to respond to the problem of oil and the crisis, stating that:

The meaning of supply exceeding demand is that capitalist production, which is anarchistic, unplanned and unorganized, has anarchistically invested or expended more labor hours in an industrial branch than are socially necessary, so that a whole segment of labor-hours turns out to be pure loss, so much wasted human labor which remains unrequited by society.

Now, what happens if this wasted human work “remains unrequited” and is not paid for by society? First, almost automatically, would be economic crises. But since the economy is in the hands of the capitalists, the costs of these crises are quickly placed on the shoulders of the working class through layoffs, wage cuts, contract suspensions, closures of companies and factories, and so on. The idea behind such measures is that creating a global army of unemployed people will safeguard the wallets of the bosses.

Once Again: Bosses Versus Workers

From that point on, as we’ve said before, the bosses will seek to impose all manner of attacks against the large majorities. But when the capitalists find themselves in an unfolding economic crisis, they also seek to reform their system in ways that  they think might keep capitalism afloat. This is where the talk of a plan to “Uberize” work comes from. What does it mean?

The bourgeoisie’s plan is to take advantage of the fear the pandemic is provoking among workers and impoverished people to deepen measures — internationally — that are favorable for the rich minority. These measures include making work even more precarious, using telework to increase productivity, to experiment with an exchange system whereby already precarious workers could be exchanged among companies — as has already been tried with multinational companies such as McDonald’s. It includes what Walmart has done: exposed thousands of workers to the virus while increasing the fortune of the Walton family that owns the company by $165 billion, or 2.6 percent during the pandemic alone. All of this has one main objective: to further enslave the working class as a way out of the post-pandemic economic crisis.

With millions of layoffs worldwide, workers are being thrown into the most extreme conditions, writes Bloomberg columnist Andreas Kluth:

The most misleading cliché about the coronavirus is that it treats us all the same. It doesn’t, neither medically nor economically, socially or psychologically. In particular, Covid-19 exacerbates preexisting conditions of inequality wherever it arrives. Before long, this will cause social turmoil, up to and including uprisings and revolutions.

The demonstrations of hundreds of unemployed people in Colombia and Ecuador — marching and chanting the grim phrase “We are hungry!” — are an example. They have been brutally beaten by the police and battered by the policy of their governments and their subordination to imperialism and big business at an international level.

For capitalist economic crises are incredible phenomena like nothing ever seen before. They are not crises of scarcity, like all pre-capitalist crises; they are crises of overproduction. The unemployed die of hunger not because there is too little to eat but because there is relatively too great a supply of foodstuffs.4

However, what is unfolding in Ecuador and Colombia can be seen from a different perspective: they are responses to a crisis in which the capitalist class is searching for a way to compel the vast majorities to resign themselves to a choice between the two fates they have to offer: hunger or COVID-19. These phenomena are part of the same process that resulted in the call for a general strike for life in southern Italy, as well as strikes breaking out across the world, such as among Amazon workers in the United States.

As we have written before, this is an ongoing process. It will not be exempt from some response from the vast majorities that are being pushed into the dead end of capitalist barbarism — responses that are linked to the processes of struggle we have been witnessing in Latin America and that remain unresolved. The social uprising in Chile is an expression of this very thing. The organic crises that are opening up on a global scale are far from over. The only certainty about what comes next is struggle. Even Henry Kissinger himself said it: failure to resolve the crisis “could set the whole world on fire.”

The question is whether we will be prepared for this great fire. The processes of struggle will inevitably take place, which ultimately puts debate and strategic preparation at the center. The active preparation of workers and this army of unemployed, as well as of the impoverished and the most conscious sectors of society, becomes a vital task in order to open a new path. Yes, the projected figures for this international crisis are catastrophic, but that is largely due to the fact that the working class, as never before, is more widespread around the world. This gives it unprecedented potential.

As the newly resurrected Marx wrote: “The development of Modern Industry, therefore, cuts from under its feet the very foundation on which the bourgeoisie produces and appropriates products. What the bourgeoisie therefore produces, above all, are its own gravediggers.”5