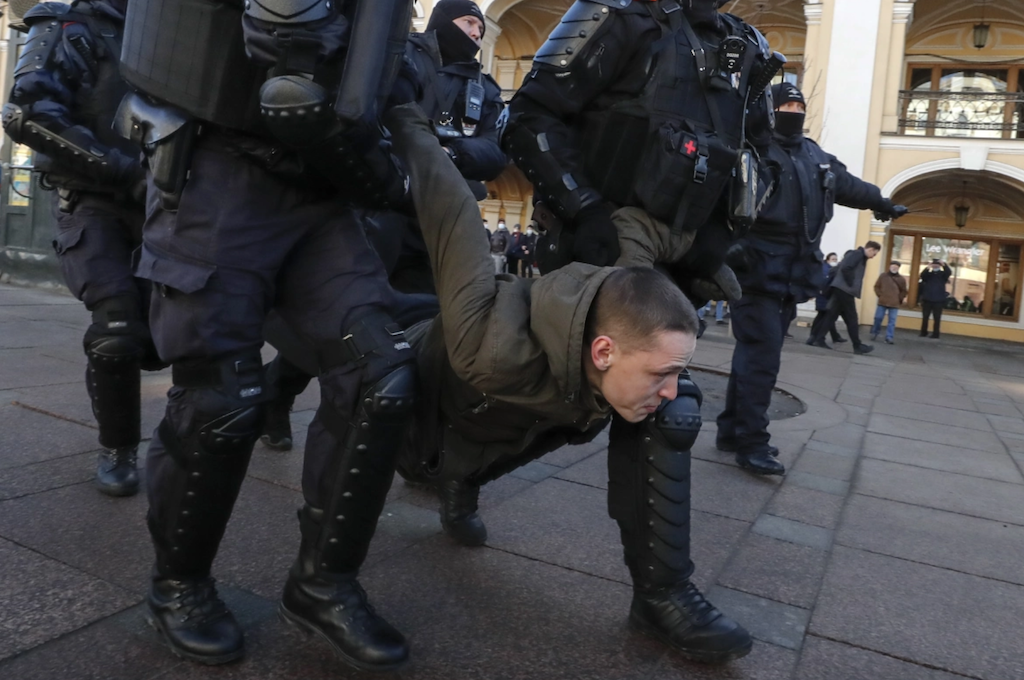 Police arrested over 750 people across a dozen Russian cities during Saturday’s nationwide day of protests. These protests were against President Vladimir Putin’s announcement of the mobilization of around 300,000 people to active duty, and against the war in general.

In recent days, spontaneous protests have erupted in many cities and towns where have been allegations of forced recruitment in order to send young people and adults to the front lines, including many of those without education or who have medical conditions.

But on Saturday, a nationwide day of protests was organized for the first time since Putin appeared on national television last Wednesday announcing the partial mobilization of reservists and his raising the specter of using nuclear weapons. The protests, which began in cities such as Novosibirsk, Tomsk, Khabarovsk, and Ivanovo, from Siberia to the center of the country, were followed by marches in Moscow and St. Petersburg, along with other locations across the country, according to the youth and peace movement Vesná (Spring), which has called for the demonstrations. On Wednesday, at least 1,300 people were arrested in 40 cities for protesting against the partial mobilization of reservists.

Police are arresting hundreds of demonstrators. Here are images from Novosibirsk.)

In Novosibirsk in Siberia, there were at least 73 arrests, at least 17 in Irkutsk, and 14 in Tomsk,. In Khabarovsk in the Far East, Inna Postnikova was arrested with a banner saying “Fight yourself, give birth yourself” and charged with discrediting the Armed Forces, which is punishable by up to 15 years in prison, then released. In Chita, Siberia, Marina Salomatova, a member of the “Transbaikal Civil Solidarity” movement, was arrested for carrying a piece of paper on which she had written “we are not meat,” in reference to the at least 300,000 men, with little prior training, who are set to be mobilized under Putin’s decree to go fight in Ukraine. The repressive forces also detained Ulan-Ude human rights activist Nadejda Nizovkina, who was interviewing protesters and those on the square in the capital of the republic of Buryatia.

A Turnaround after the Ukrainian Counteroffensive

Putin’s official statement last Wednesday was his first since Ukrainian forces launched a successful counteroffensive in several occupied cities. The Zelenskyy government’s propaganda images showed a disbanded retreat and abandoned Russian tanks and vehicles. Regardless of whether this information is true or not, the fact is that the critical ultranationalist voices within Russia soon followed. Although demands from several sectors had been multiplying, such as a bolder incursion from Putin and the dismissal of the military commanders who had led to the current disaster, they were heard clearly after the Ukrainian counteroffensive.

The Kremlin-friendly head of state of the Chechen Republic, Ramzan Kadyrov, among others, questioned the recent prisoner exchange between Russian servicemen and members of the Azov Battalion, which contains Ukrainian mercenaries and pro-Nazi Ukrainian servicemen. He was clear in his message to Putin that it was an aberration and that they had not been consulted about it. Let us recall that Putin justified his reactionary invasion on the basis of a supposed “denazification” of Ukraine, a justification supported by the ultranationalist sectors that do not look favorably on the surrender of members of the Azov Battalion. These critiques from the ultranationalist sectors provoked the recent announcement of the partial mobilization of reservists.

This turn by Putin, which in recent days was accompanied by images of forced conscription in order to initiate the mobilization of reservists, as well as multiple expressions of discontent, brings the Russian population closer to a reality that until now felt distant for many people. The announcement of the mobilization of reservists is beginning to hit a large number of Russian families, especially those most impoverished sectors.

This tug of war between the demands of the ultranationalist wing and sectors of the population that are beginning to realize that the war is closer than they thought shape the coming days and weeks. And it won’t be easy for Putin.

First Published in Spanish on September 24 in La Izquierda Diario.