A new period of social unrest has opened up in Eastern Europe. It gives expression to widespread discontent with degrading conditions and disillusionment with not only the political elite, but also – and in extension – the entire process of capitalist restoration. 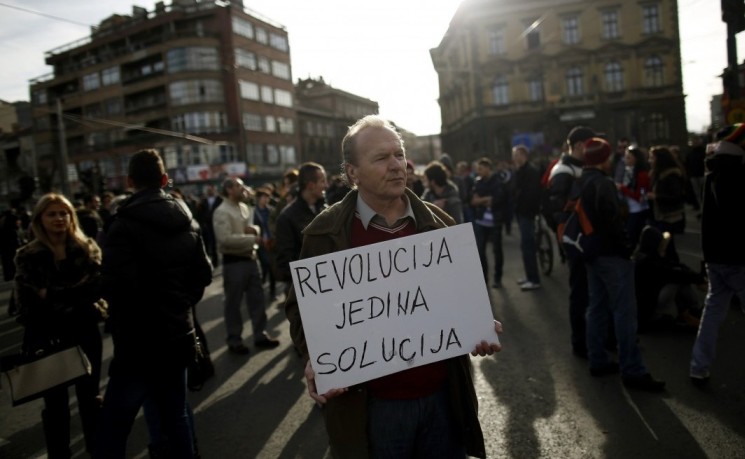 Since the fall of the Berlin Wall, the “failure of communism” and narrative of capitalist restoration in the former “Soviet bloc” were deployed as central elements in the discourse of bourgeois triumphalism, which eclipsed all other political perspectives and proved to be a major ideological challenge for social movements. In part II of an article translated by the author, Philippe Alcoy continues an examination of the recent wave of mass mobilizations in the former “Soviet bloc.” Part I can be found here .

What fundamentally characterizes these movements is their ideological confusion and lack of an alternative program that responds consistently to the interests of the working class, independently of the capitalist political currents and imperialism.

Facing the political regime and a degraded democracy, protesters often advocate for “strengthening civil society”. On the issue of mass privatization, it is not uncommon to hear the demand for “transparent privatization”. Somehow there are widespread illusions about the possibility of building “good capitalism” and true liberal democracy. That is to say, a class-conciliationist vision in which “good bosses”, middle classes and workers have a common objective: the fight against the corrupt political class.

NGOs, foundations and international imperialist organizations help instill the vision that bourgeois democracy and capitalism are impossible to overcome. They present the “European horizon” as the only salvation for Eastern European societies and use this ideology to contain mass dissatisfaction.

However, even if local capitalists and imperialism are able to deflect and/or contain different popular revolts, it does not mean that the governments are stable and the sources of rebellion have disappeared. On the contrary, these demonstrations and riots are a blow against the regimes, weakening them and leaving open the possibility of more social struggles in the future.

One of the problems of these mobilizations is that they take on a polyclassist, “citizen” form where the working class participates, but is diluted in the mass of ”citizens”. It makes the development of class-oriented demands more difficult. Instead, it’s the middle class that shapes the political demands.

The only example that has occurred in recent years in which the workers’ demands were really the center of the movement was during the social explosion in Bosnia in 2014. In this case, the movement was born out of the struggle against the repression of the unemployed and precarious youth in the (former) northeastern industrial city of Tuzla. The unrest then spilled over into major cities, including the capital of Sarajevo.

But there were still some limitations. For instance, the movement failed to extend to the Serb entity, Republika Srpska. Furthermore, the sectors in struggle were largely the unemployed, precarious youth, or workers whose factories were in advanced stages of closure. Paralyzed by fear of unemployment, the job-holding sectors of the working class were not actively involved. The bureaucracies of major trade unions even condemned the protests.

The main question is whether the working class, with other oppressed sectors, will manage to intervene in future social explosions and impose its own claims against the local ruling classes, imperialism and their allies in the union bureaucracies.

The passage from “restoration” to “transition”

Defending a class program that is independent from the local ruling classes and imperialists is fundamental. This is especially the case in a region in which, in the 1980s many countries experienced major workers’ struggles that were against the Stalinist bureaucracies, but were incapable of solving the economic and social crisis spreading across the entire socialist bloc.

Popular uprisings in several countries have managed to reverse the old Stalinist regimes, but have been capitalized and diverted by various bourgeois and restorationists political alternatives. The pressure of the working class is one of the main factors in the 1990s that led a part of the Stalinist bureaucracy to adopt the path of capitalist restoration.

In all of these cases, workers were unable to slow down the process of capitalist restoration and halt the establishment of bourgeois democratic regimes by defending their own program of political revolution against the Stalinist bureaucracy – that is, to overthrow the Stalinist bureaucracy and replace it with a regime based on proletarian democracy with decisions taken in organisms of self-organization (worker’s soviets or councils); to defend the economic bases of the state (social property); thus allow for the improvement of living conditions for the masses and begin an internationalist struggle for socialism. Unfortunately it was not like that. A significant part of the proletariat decided, though reluctantly, to support pro-capitalist alternatives.

Today, as we begin to see emerging breaches in these regimes introduced in the early 1990s, the working class should avoid making the same mistakes. It is imperative that the alternatives are radically different from the “solutions” provided by the bourgeoisie and the imperialism.

Thus, when dealing with corrupt and repressive regimes, it is not possible to propose superficial changes and reforms that are limited to the existing framework. The framework itself must be reversed. In this sense, the demand for a Constituent Assembly based on the broadest democracy could become a first step to move towards meeting the structural democratic demands of the masses.

In this way, workers, youth and all the oppressed could defend measures (ie., all politicians should earn the same salary as a skilled worker) that would prevent politics from becoming a source of personal enrichment for a handful of corrupt politicians. This is a central problem in all countries of the region that has generated a general rejection, but does not ensure that the politicians will stop governing for the interests of capitalists. Therefore, in addition to defending the claim of the election of all positions in the state, we should highlight that MPs, ministers, judges, etc. are revocable at any time.

In this region, the question of national oppression arises for the concerned people not only against imperialism, but also within each country. Nationalism has been used by several restorationist currents to divide the exploited in order to reap benefits from the reintroduction of capitalism. This is why the right to self-determination for the oppressed nationalities of the region is also a central democratic demand and the only way to lay the foundations of a real fraternity among peoples.

In former bureaucratized workers’ states of Eastern Europe, one question plays a major role – perhaps comparable to the question of land reform in the past: the re-nationalization of all public companies and services that were privatized during the process of capitalist restoration, without compensation and under the management of workers and the population. This claim could also be extended to the private businesses that were opened during this period and are now in crisis, deciding to close or implement massive dismissals.

While the private appropriation of wealth that was produced collectively is one of the fundamental characteristics of capitalism in the former bureaucratized workers’ states, at the same time capitalist restoration involved the large-scale theft of property and national wealth produced over several decades by the entire society. The openly criminal character of this contemporary primitive accumulation of capital allows the claim for re-nationalization to be fundamental and clearly comprehended by the working masses in these countries.

This measure would not only be a way to address the urgent problem of unemployment, especially among young people, but also a solid foundation for the establishment of organs of self-organization of the working class and masses; That would then provide an answer to the question of “popular participation” in making economic and political decisions in society. This self-organization of the masses could even grow to create forms of dual power and dispute with the bourgeoisie.

Putting the working class into motion in defense of such a program would require an organization – an organization that is able to respond not simply to practical, but above all to political issues. In this sense, one of the preparatory tasks preceding the (very) probable event of social explosion and maybe revolutionary process is the construction of a revolutionary party of workers, youth and all the oppressed; a party that is completely different from those that have been developed so far in the region; a party that is decidedly revolutionary and sides with the exploited and oppressed; a collective organizer that is able to learn from the past and recent struggles and thus prepare for future victories. For this, the exploited masses’ recuperation of the regions’ political and ideological heritage of Trotskyism – the only Marxist current that denounced from the beginning the bureaucratic deformation of the former USSR dominated by Stalin – will be fundamental.