Mass mobilizations in Chad against the Military Junta and French Imperialism

A week after the death of the dictator Idriss Déby, Chad’s military junta and France are confronted with massive mobilizations of the toiling masses. 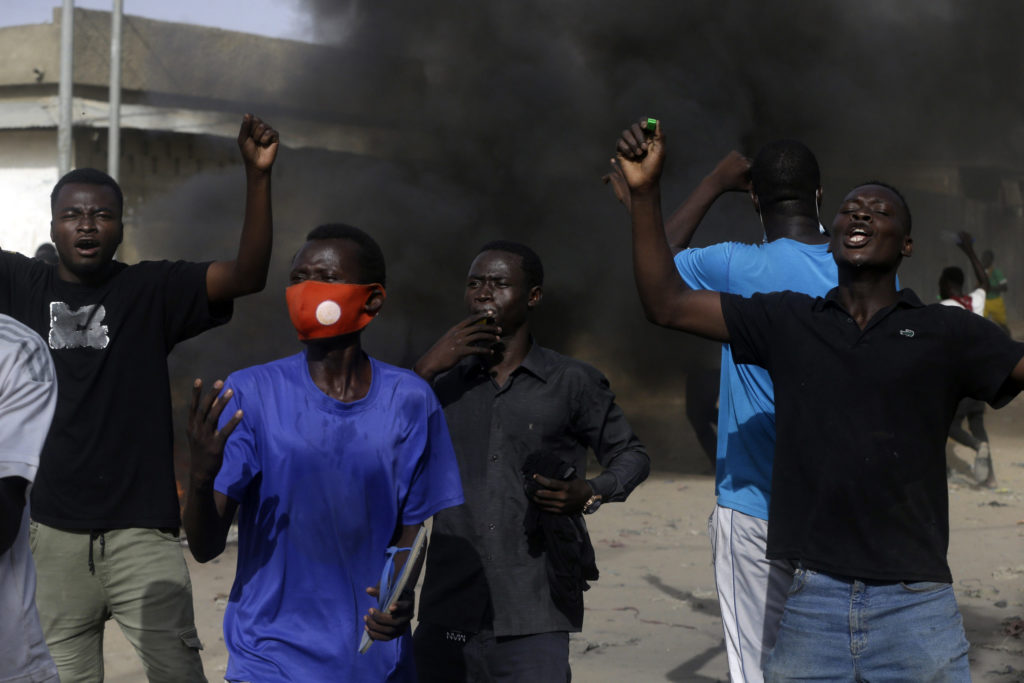 On Tuesday, a week after the death of Chad’s dictator, Idriss Déby, and the formation of a Transitional Military Council (CMT) to lead the country, the opposition organized mobilizations throughout the country, particularly in the capital, N’Djamena. French president Emmanuel Macron paid tribute to Déby and endorsed his son, Mahamat Déby, to head the CMT. This lit the fuse, pushing the popular classes and the youth to the streets against “Françafrique” (French Africa) and the military dictatorship.

Macron’s imperialist tears and Déby’s funeral consisted mainly of a clear anti-democratic agenda. The CMT, supported by France and headed by Mahamat Déby, began these attacks: they dissolved the national assembly and the government, saying they will organize elections in 18 months. While Chad’s constitution states that the president of the National Assembly takes power if there is a presidential vacancy, Macron has reaffirmed France’s support for a dictatorial regime run with an iron fist.

Indeed, Chad’s destabilization is of particular concern to France, which has historically held Chad as a central geostrategic ally in the region, in terms of security, counter-terrorism, and military and economic control.

Gassim Chérif, a student exiled in France and political activist who opposes the junta, reminded Révolution Permanente that “[Macron’s] interest is the defense of his enclosure in French-speaking West Africa. France is very shrewd in what it is doing and it is continuing in its policy since 1960, with which Chad has never known a peaceful political alternative.”

Macron, who was quickly joined by the African Union and the Congolese president, at first reaffirmed his support of the military junta for a transition organized by the army, but then he changed his mind in view of the scale of the mobilizations. The G5 Sahel (coordinated by France and composed of Burkina Faso, Chad, Mali, Mauritania, and Niger) has reportedly mandated two of their members to attend the negotiations between the opposition and the military junta, the latter being invited by the self-proclaimed president.

After Macron’s speech at Déby’s funeral, the reaction of the political opposition and of human rights and civil society organizations was swift. As Dobian Assingar, interviewed by Révolution Permanente and honorary president of the League of Human Rights in Chad, which suffered repression this Tuesday, reminds us, “It is a scandal that the president of the French Republic comes to support [the junta]. And who also puts in power the son of the former president who ruled us with an iron fist for 30 years! And now we should see the same system perpetuated?”

Meanwhile, massive mobilizations swept through the country on Tuesday morning, especially in N’Djamena and in the south of the country. The call was made by the movement “Waki Tama” (The time has come), which brings together several human rights organizations as well as opposition parties to the regime, such as the Party of Change and the National Union for Democracy and Renewal. Thousands of demonstrators protested throughout the day in the capital, and especially in the working-class neighborhoods in the south of the city.

In addition to their rejection of the military junta, the youth and a large part of the Chadian working classes have also expressed strong opposition to the influence of France. In a country with such an important historical tradition of French presence, where France has several military bases, but also where the largest French companies are present, the appearance of anti-Françafrique messages in the mobilizations is historical.

In addition to the sight of several Total gas stations burned by the demonstrators, there were sharp posters saying, “Macron and France, out!” It should be noted that unlike most recent social movements in the region, France is today, as in the case of Senegal, very clearly identified as responsible for the economic and political situation that’s causing suffering among the population. This situation is of such concern to the French authorities that they quickly changed their mind on their previous political message.

Fearing a destabilization of the French position in the region, Macron and Congolese president Félix Tshisekedi said in a joint communiqué that they support “an inclusive transition process, open to all Chadian political forces, led by a civilian government of national unity and expected to lead the country to elections within 18 months.” They condemned the repression of the demonstrations.

We must see in this in light of the absolute hypocrisy of the French government. The latter is largely responsible for the current situation in Chad, and it has a historic tradition of subjugating the country to the interests of imperialism through successive military interventions as well as by supporting the region’s worst dictators, such as Idriss Déby and the military junta.

According to several NGOs, the repression, financed and armed by France, caused about nine deaths and many were wounded — a high price for a first day of mobilization. As Murielle Debos, a researcher specializing in Chad, wrote in the French daily Le Monde, “It is true that the Chadian army is better trained and more combative than the other armies in the region. But France and the United States, which have established military cooperation programs, could not be unaware that they were playing with fire. The army, acclaimed for its prowess on the ground, is also guilty of abuses against civilians in Chad and in countries where it has intervened, particularly in the Central African Republic. In their latest episode: Chadian soldiers committed rape in Niger.”

The demonstrators were also very clear in their message against the military junta, armed and financed by France: there will be no democratic transition with French imperialism!

In an interview with Révolution Permanente, Gassim Chérif recalls that most of the opposition sectors today have interests in the French presence in Chad, and in particular the Chadian bourgeoisie: “The local bourgeoisie wants to maintain its prerogatives, whether it is in the opposition or in the government, just as with the CFA franc [currency of the French-speaking countries]. There is no character that stands out independently of French politics.”

In this sense, Chad’s independence and the possibility for the popular classes to decide their destiny by themselves will not be made as a result of a negotiation with French imperialism. Today’s demonstrators have shown the way to the true independence of Chad by confronting the repression for which France and the military junta are responsible. As said by Anasse Kazib, a railway leader and leader of the Revolutionary Communist Current, “Against repression, the military junta and French imperialism, the French workers movement and youth must affirm their support for the Chadian people! Out of Françafrique!”