This Wednesday, the French government unveiled the details of its proposed pension reform. Tuesday marked the second day of mass mobilization, while an ongoing general strike had already paralyzed the country for six days. 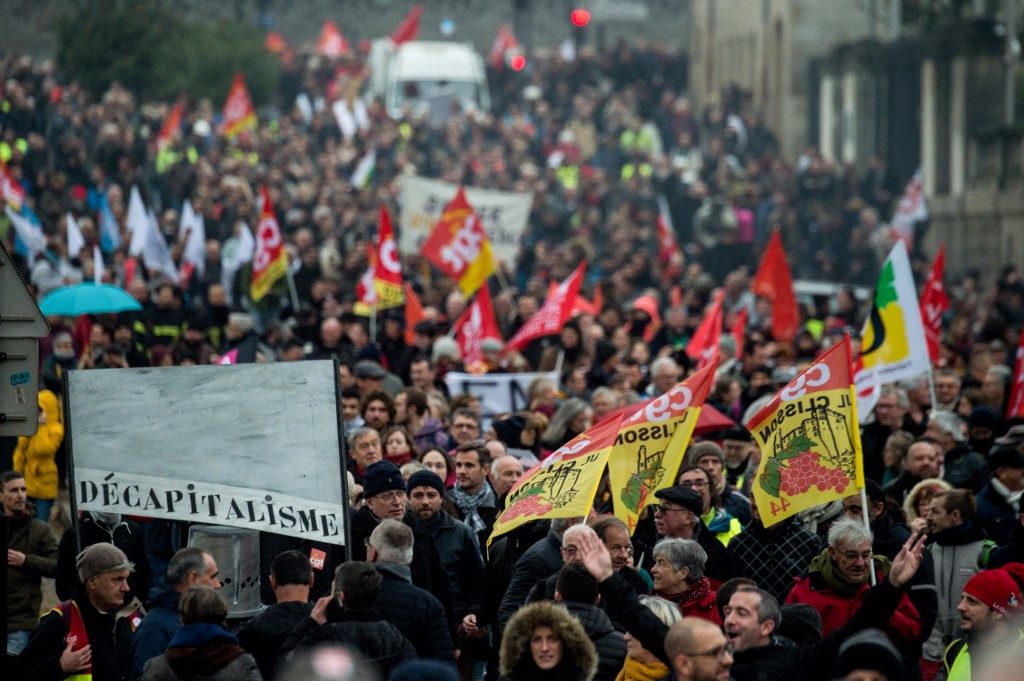 On Wednesday, December 11, the French government unveiled the details of its proposed pension reform plan. On Tuesday, the second day of mass mobilizations took to the streets, while the ongoing general strike reached its sixth day, continuing to grind transportation across France to a halt.

Though the turnout fell from the first demonstrations held last Thursday, they still retained their force with broad participation from teachers, students, and trade unionists. The General Confederation of Workers (CGT) estimated that there were 885,000 participants, compared to the 1.5 million they had calculated after the first march.

Union leaders have been careful not to call for an unlimited general strike. They have left the responsibility and choice of renewal to the workers on a case-by-case and local basis, leaving themselves room to negotiate with the government. Even at their most combative, union leaders have continued consulting with the government in talks that have been going on for months, even while the workers reject the reform as a whole. The CGT has taken the position of rejecting the current reform plan while supporting the idea of another reform. However, no truly progressive reform will be achievable without directly confronting Macron and his neoliberalism.

Before the demonstration, the secretary general of the CGT, Philippe Martinez, made a statement: “I hope Macron will listen to the social anger that is manifesting even more forcefully these days, but that we have been seeing for months. Let him withdraw his project and let us seriously discuss the necessary improvement of the reform system, which is one of the best in the world.”

On the eve of Prime Minister Édouard Philippe’s presentation of the entire reform, Martinez said that there is a problem of “financing” in the current pension system but demanded that any new adjustments be “supportive” and that they be fixed by creating more work, raising the contribution paid by employers, and raising salaries.

“What we want is for the government to completely withdraw this reform and then we’ll talk,” added the trade unionist. He announced that, on Tuesday night, they would decide in an inter-union meeting how the movement will continue.

In the capital, the government once again responded to the workers with repression. Security forces blocked much of the southern area of the city, from the Garden of the Invalids to Denfert-Rocheareau Square, where the march took place. Meanwhile the city remains virtually paralyzed by the continued strike of public transport workers with only 6 of the 16 metro lines in operation.

The striking workers have raised slogans against precariousness. Students and professors have also taken up these slogans, forcefully rejecting the reform and declaring it “the straw that broke the camel’s back.”

Charlene Dupont, a professor at the University of Paris-East Creteil, told Efe: “We have the feeling that we are being drowned more and more every day. This goes beyond retirement, it is a cry against the worsening of public services, working conditions, overcrowded classes, and students overwhelmed by precariousness.”

Aspects of the General Strike Against Macron

At the national level, with three quarters of the conductors on strike, the national railway company SNCF is running only 20% of its long and mid-distance trains. Only one in five trains will work while the lines with Spain and Italy will remain cut. Railway difficulties are anticipated at least through the end of the week.

Meanwhile, Air France has cancelled more than 30% of its flights and EasyJet up to 92%, after the Directorate-General for Civil Aviation (DGAC) requested a reduction of flight schedules by 20%.

Faced by these challenges, the government has thus far maintained its resolve. PM Philippe has confirmed, “We intend to build a universal regime, by distribution and by points. This is what the president committed himself to and this is what we are going to do.” He added that there will be no “magic announcements.”

Before Tuesday’s mobilization, the Executive had previously only advanced that there will be a unification of the 42 pension systems and that the calculation of pensions will be done through a points system. With this supposed “simplification,” Macron’s government is attempting to obscure its true goal: an end to “special regimes” that are in fact conquests of the workers and that support those who work in unhealthy conditions. There are special regimes for the public railway company (SNCF) and for public transport in the Paris region (RATP), both of which comprise the hard core of the mobilizations.

Last Thursday’s historic day of strikes and mobilizations showed the enormous strength of the working class when it struggles together. The decrease in the participation of the second day does not indicate a waning will but rather attests to the union leaderships’ attempts to contain the movement. They prefer instead to remain with Macron at the negotiation table. In order to definitively stop all attempts at reform, the workers must overcome their current leaderships and take the struggle into their own hands.