Last week, the Narendra Modi-led government of India passed the Citizenship (Amendment) Act which will provide non-Muslim refugees from Pakistan, Bangladesh, and Afghanistan with a path to citizenship while leaving millions of undocumented Muslims vulnerable. The Act is openly discriminatory and sets a dangerous precedent for religion-based citizenship in the country. 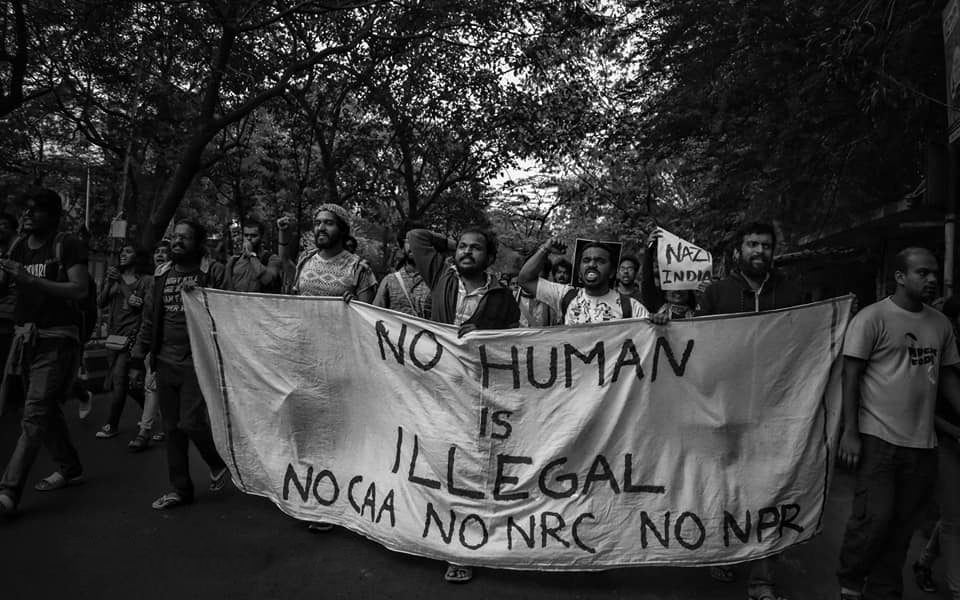 Image From The Citizen

Protests have flared across India over the last few days after the Citizenship (Amendment) Act (CAA) was passed in Parliament last week. A central piece of legislation in the Hindu-nationalist Bharatiya Janta Party’s campaign platform, the CAA will provide citizenship to non-Muslim refugees from Pakistan, Bangladesh, and Afghanistan. It specifically mandates that undocumented immigrants need to belong to one of six religions – Hinduism, Sikhism, Buddhism, Jainism, Zorastrianism, and Christianity – to be eligible for citizenship.

The current act amends the Citizenship Act of 1955, which set stringent rules on citizenship eligibility, including an 11 year proof of residence, and made it impossible for undocumented immigrants to apply. The CAA reduces the eligibility time period to 6 years, but only for non-Muslim immigrants from Muslim-majority neighboring countries. It provides a path to citizenship for undocumented immigrants of the prior-mentioned groups only if they can prove that they entered the country prior to December 31, 2014.

In addition to being openly discriminatory, the CAA becomes particularly dangerous when seen in parallel with the recently-concluded National Register of Citizens (NRC) exercise in the northeastern state of Assam. 1.9 million people were excluded from the final NRC list for not being able to adequately prove their citizenship and now face the possibility of indefinite imprisonment in detention centers. The NRC placed the burden of proof on individuals, the majority of whom were working class or poor, to prove that they belonged in the country. With a cut-off date of 1971 to prove domicile, the NRC excluded a large number of Bengali Hindus at the time of publication. By easing the conditions required for citizenship to the six communities outlined by the Act, the CAA now gives them a second chance at citizenship – a path to full rights and freedoms that is targetedly being denied to other marginalized and vulnerable groups, particularly Muslim immigrants.

The passing of the CAA is yet another decisive victory for the BJP and its Hindu nationalist project since their reelection in May. With this new term, their half-promises to improve the country’s economy have completely died away. Instead, they are working hard to realize their vision of the Hindu Rashtra – a nation state and national identity that is steeped in classical Hinduism. This program is made obvious in the BJP’s recent abrogation of Article 370 in Kashmir and the consequent lockdown of the Muslim-majority state, their growing calls for a national NRC, and in the debate over the Citizenship (Amendment) Bill, where BJP ministers invoked the independence movement and partition for the basis of this discrimination.

For Muslims who, in addition to being the second largest religious group, form the vast majority of undocumented immigrants in the country and already face systemic discrimination and violence, the CAA is a damning blow. The possibility of a national NRC now is even more threatening and may render hundreds of thousands of them stateless and without any path towards citizenship and basic rights and freedoms. The Act also poses a threat to other precarious migrant groups, such as Sri Lankan Tamil refugees and Rohingyas from Myanmar, who are not covered by these latest provisions.

Mass Protests Spread across the Country

Although the BJP government has been able to enact its agenda with relative impunity since coming into power, the passing of the Citizenship (Amendment) Act has resulted in widespread backlash. Since last Friday, mass protests have broken out all across the country and tens of thousands have taken to the streets to protest the Act. In cities and towns across India, Muslim communities have taken to the streets in full force, shutting down important centers of commerce. University campuses across the country, in particular, have become hotbeds of dissent. This resistance has, however, been met with a violent police crackdown and internet blackouts in large parts of the country, particularly in major centers of protests, like Delhi, Assam, Aligarh, and West Bengal.

More than 100 students were injured after the police tear gassed and beat up protesters in Aligarh Muslim University and New Delhi’s Jamia Millia Islamia. On Sunday, thousands marched towards Parliament in Delhi in protest of the new law, but were violently dispersed by the police who then proceeded to raid Jamia Millia Islamia, tear gassed the library and beat up students and staff. Students at Aligarh Muslim University also clashed with police, prompting university officials to shut down the school until the New Year and forcibly expel students from their hostel accomodations.

Some of the most brutal repression has happened in the northeastern states, where the Central Government deployed over 5,000 paramilitary personnel last week in the wake of anti-CAA protests. In Assam, amidst curfew and an internet blackout, protesters clashed with police in street battles, leaving two dead and many more injured.

Solidarity marches and demonstrations spread all over the country on Monday, with masses taking to the streets not only to protest the new law and its xenophobic defense by the Modi regime, but also in solidarity against the violent repression of the police.

Leaders of Opposition parties have been quick to assume leadership roles in this new wave of protests and appear to present a unified front in their opposition. The Communist parties, along with the Congress and other state parties, organized a press conference on Monday where they condemned the CAA as well as the police violence and repression of students. At least four Chief Ministers have announced that they will not allow the implementation of the CAA or the NRC in their states. In addition to their statements, some of them have also joined physical protests. Priyanka Gandhi Vadra, a prominent member of the Congress party, joined protesters at India Gate in Delhi for a sit-in protest. In West Bengal, Chief Minister Mamata Banerjee led a march of thousands of protesters through Kolkata and announced three consecutive days of similar marches in protest of the NRC and CAA.

At a time when authoritarianism in India is rapidly on the rise and mass protests have been isolated events that the political regime can wait out, this new wave of protests offers a potential shift in the relation of power in the country. These protests are no longer limited to liberal, urban spaces, but are ubiquitous across the country and present a real opportunity for the masses to push back against the right. But such victories can only be won when we break away from the political class, including the opposition leaders who are opportunistically participating in the demonstrations while promoting the same neoliberal policies responsible for the rise of the BJP.

As elsewhere in the world, the right-wing in India, backed by the bourgeoisie, rose to power by systematically exploiting mass anger over decades of austerity and neoliberal policies implemented by liberal and left regimes. The Stalinist left parties, like the CPI and CPI(M), in cahoots with the center-left Congress party, have long supported the expansion of neoliberalism in the region by using the rise of the right-wing as the boogeyman that must be defeated at all costs. The Congress party, in turn, is notorious for spearheading the implementation of austerity policies, increasing military spending, and decades of neoliberalism, creating the conditions that led to the rise of the right. This, in tandem with the many regional parties who have exploited mass dissatisfaction for careerist ends, is a continuation of a political order that continuously exploited class tensions for their own benefit.

While opposition leaders are calling for an end to the Citizenship Amendment Act, it is a call that does not go far enough. The masses need to push for – and win – more. For years, the capitalist class has relied on undocumented immigrants to form its precarious working class to extract increasing profits, and has maintained this precarity through their political representatives. Today, opposition parties like the Left Front parties, Congress, and Trinamool Congress are calling for the repeal of the CAA, challenging its discriminatory nature; however, when they were in power, they did nothing to guarantee full rights for the same class they purport to protect. Rejecting the discriminatory nature of the Act also requisites challenging the very basis of a law which designates certain people “illegal.” The fight against the CAA and NRC does not stop at the repeal of these processes, but also has to push for the full rights, freedoms, and citizenship of all undocumented immigrants.

On the streets of Chile, a popular refrain in the current uprisings says, “It’s not 30 pesos, it’s 30 years.” From Lebanon to Puerto Rico to Sudan to Ecuador, it is a sentiment that has taken root in the masses and made them topple regimes. Now, it is crucial for the working class and the youth of India to shed their illusions in their political leadership and mobilize independently against the bourgeois order that props up the right.