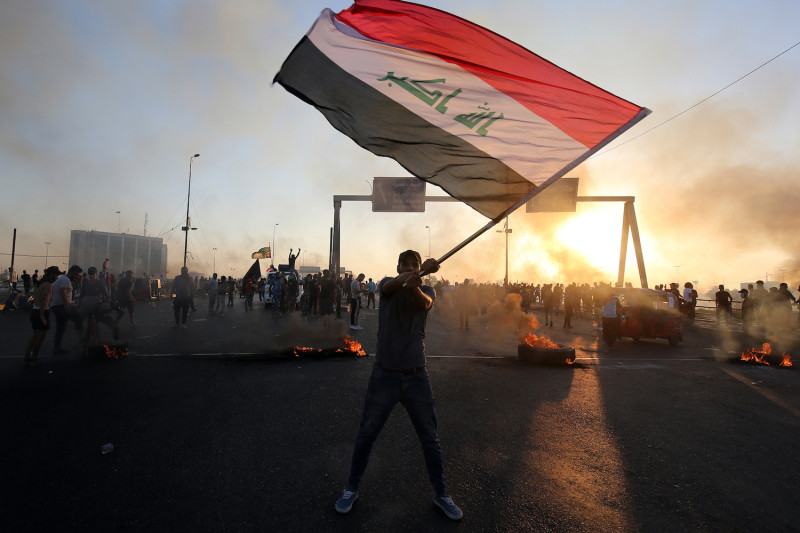 For over two weeks, thousands of Iraqis, mostly youth, have been at the frontlines of spontaneous but intense protests. Across the country, these mobilizations have already led to 110 deaths and 6,000 injuries. The protesters central demands include greater employment opportunities, access to electricity and clean water, and an end to corruption. So far no political party, movement or religious leader has been leading the mobilizations, although in the locations where protests take place the population is mostly Shiite.

Brutal state repression followed the protests almost immediately, with Iraqi special forces violently entering Baghdad with armored vehicles firing live fire point-blank at the protestors. Though anti-government rallies have become almost routine in Iraq since Prime Minister Adel Abdul Mahdi came into power a year ago, these tactics mark a more heavy-handed response from the state. In addition to the deaths and injuries, almost 500 people have been detained since the start of the protests.

These protests come after months of unrest around similar demands. Years of wars, occupation, and economic instability at the hands of imperialist countries like the US has plundered Iraq into a vulnerable state. Mass migrations and high death tolls have created an Iraqi population of which over 60 percent is under the age of 25. 40 percent of these 20 million young people are currently unemployed.

A group of young demonstrators living in Baghdad shared their suffering and grievances with the Iraqi state. “I studied law, but the only work I found was in a hair salon,” a 26-year-old Baghdadi protestor told CNN. “My friend was killed the day before yesterday.”

One protestor who is a university graduate and unemployed screamed “We want a country we can live in, it’s been 16 years!”

Living under the shadow of occupation and war the majority of their lives, many of the young protestors are fed up with a political class they view as corrupt for negotiating away their country’s natural and economic resources with imperialist powers.

The numbers tell most of the story: even though oil accounts for 65 percent of Iraq’s GDP, it creates 90 percent of government revenues. The oil industry only employs 1 percent of the local workforce. The majority of Iraqis who do have a job (about 60 percent) work in public administration. Meanwhile, one third of the population is living in poverty.

In response, more and more protesters have begun to include the resignation of public officials in their growing list of demands against the state. In rallying cries reminiscent of the recent demonstrations in Algeria, Sudan, Haiti, and Ecuador – Iraqis are similarly calling for an end to endemic poverty and imperialist-backed regimes.

On Tuesday Prime Minister Abdul Mahdi, issued a plan to shore up the demonstrations. His plan centers around increased subsidies and housing for the poor, as well as training and educational initiatives for unemployed youth.

Instead of quelling the anger, however, these proposed interventions ended up fueling the young protesters’ rage. Protests carried on in even larger numbers with many demonstrators fed up with hollow promises.

While Prime Minister Abdul Mahdi posted his reforms on social media, 75 percent of the country continues to be cut off from the internet and social media according to NetBlocks, a global platform that monitors network censorship.

Along with the internet outages, Abdul Mahdi’s government has also decreed a curfew in Baghdad and the provinces of Di Qar, Najaf, and Maysan as another way to discourage the unrest and block communication between protestors.

As Iraqi youth grapple with economic devastation, their fight against the ruling class may only intensify. Increasing protests in semicolonial countries like Ecuador and Haiti show that the political and economic interventionism from imperialist hands has led the masses to misery.

At the same time, the recent uptick in class struggle among semicolonial countries like Iraq implies that the only way forward is for the international working class to win back their power from corrupt regimes, push imperialists out, and reshape society with a socialist program.