Mass Uprising in Iran Set Off by Hike in Fuel Prices

The price of petrol was tripled in Iran virtually overnight on Friday. In response to this move by the government, Iranian masses took to the streets to protest a deepening economic crisis. 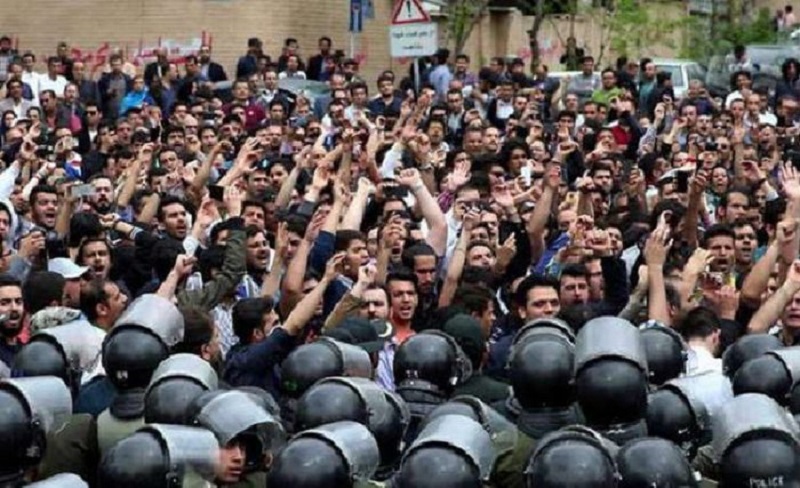 This past Friday, the Supreme Council of Economic Coordination (SCEC) in Iran announced fuel price increases of up to 300 percent and a rationing scheme that restricts fuel purchases to 16 gallons a month. Beyond 16 gallons, an additional charge of $0.26 per litre is incurred on the already steep petrol prices.

In response, widespread demonstrations erupted in over 107 cities across Iran. According to the semi-official government news outlet Fars News, around 100,000 people took to the streets. In an effort to interrupt the communication of the demonstrators, a near-total internet shutdown was implemented on Saturday, generating even more anger among a now-disconnected populace.

In the first hours of the protest alone, three people were killed by police violence. These killings triggered even greater solidarity among demonstrators and led the protests to grow to several dozen cities. Reports from Radio Farda indicate that anywhere between another 100 and 200 protestors were killed within a few days of protests. Thousands more have been injured and arrested.

Despite this brutal repression, defiant masses continue to block major highways, burn petrol stations and police apparatus, and tear down town halls. As an expression of hatred against the Iranian government and the economic conditions of the country, banks have also become a central target for the demonstrators. In Shiraz and Isfahan, school bus drivers announced a strike, suspending classes. In Tehran, workers at the Tehran Bazaar are also on strike.

This video shows that people in Iran are still in the streets organising themselves & fighting back against the security forces.

Footage: (likely 21.11.19)
Protesters chasing the security forces and forcing them to escape. Location- could be Tehran. #IranProtests pic.twitter.com/I86UlNngLF

Even with these heroic shows of resistance, the protests are spontaneous in nature and lack leadership and concrete demands. Sectors of the left who have led modest initiatives in recent years are actively involved with the current movement, however. The workers of the Haft-Tapeh Sugarcane Factory who famously led major strikes against privatization in 2017 have joined other workers on strike. University students at the University of Tehran, University of Kurdistan, and the University of Tabriz have also staged fervent protests at their campuses.

Importantly, the masses in Iran have left behind the pacifist, bourgeois leadership of the Green Revolution Movement of 2009 and are now struggling with slogans like: “Gasoline has become expensive; poverty has increased” and “Why are you sitting, You are your own savior.”

Economic demands have quickly become political demands, a transversal characteristic of many of the current protest movements throughout the world.

The heterogeneous class character of the mobilizations is reflected in the diverse demands.   There have been calls for the support of the dictatorial former Shah of Iran, who fell with the Iranian revolution of 1979. Other slogans have called for the dismissal of the regime and for the resignation of Ayatollah Khamenei. Some protesters have also called into question Iran’s intervention in other countries in the region while the country is experiencing a deep economic crisis.

The underpinnings of the current economic crisis

Although oil is cheaper in Iran than anywhere else on the planet, the steep hike in oil prices reflects just how precarious life has become in Iran since the distressing U.S. economic blockade implemented by Donald Trump in 2018.

With inflation at almost 50 percent, the SCEC—a powerful ad-hoc body formed by Supreme Leader Ayatollah Ali Khamenei after U.S. withdrawal from the nuclear deal and the re-imposition of crippling sanctions—made the decision to raise oil prices under the guise of greater “financial assistance” for poor families from the funds raised by the move.

According to the IMF, the Iranian economy is set to contract by 9.5% this year, sending thousands into poverty. While the economic catastrophe rages on for working class Iranians, the decision to slash fuel subsidies comes after the discovery of the most important oil fields in recent years, adding 56 billion barrels to Iran’s reserves. Despite the finding, the SCEC imposed economic measures that hit workers who travel everyday the hardest.

The new face of Iran protests and what to expect

Since the mass uprisings in Lebanon and Iraq—two countries influenced by the growing regional power—it was only a matter of time before the protests jumped over to Iran. Though the protests in Lebanon and Iraq are partly directed against the Iranian foreign policy in these countries, the masses in Iran understood these movements as inspiration to struggle for their own goals.

Amidst growing unrest in the region, this recent outbreak of protests continues to undermine the Iranian ruling class and highlights the inability of the Iranian regime to pacify the aggravated masses. As we reported on the outbreak of protests and strikes in Iran last year: “The protests will undoubtedly leave scars on the Islamic regime—they are stronger than the Green Movement of 2009, and the power of the mullahs, based in repressive and clerical apparatuses, is neither structurally nor economically capable of meeting the economic and democratic demands of the impoverished masses.”

This new tide of protests, particularly in regionally powerful countries like Iran, not only sends a powerful message to reactionary bourgeois governments in power but perhaps an even more potent message to workers and the oppressed throughout the Middle East and around the world.

The outcome of these protests remains to be seen, but, without a doubt, the courageous actions of the radicalizing masses in Iran are politically instructive and could only be harnessed further with demands and a leadership that direct this rage to elevate working class concerns.