The Massachusetts Teachers Association (MTA), representing 110,000 education workers, has called for a strike to curtail climate change through a Green New Deal. This militant initiative shows the way forward: Working people can stop capitalism’s destruction of the planet. 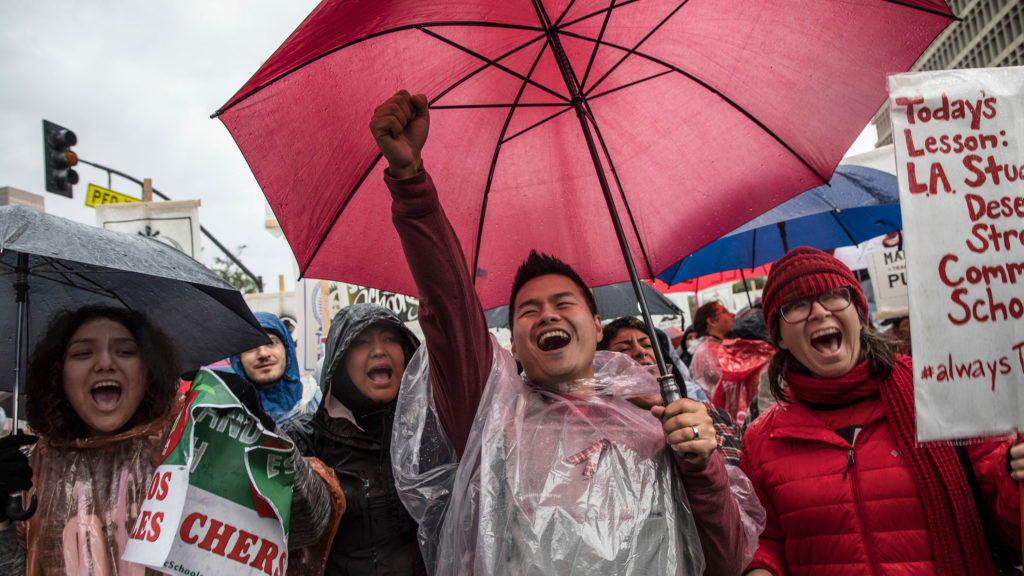 It is not every day that a 110,000-member teachers union calls for a national (and illegal) strike. And it’s even less common for the strike proposal to center on the need to save the planet from ecological collapse. But that’s exactly what the Massachusetts Teachers Association (MTA) agreed to at their recent convention, which was attended by over 1,200 delegates. While the proposal for a national teachers strike did not pass at the National Education Association’s Representative  Assembly, the MTA resolution points toward the type of labor militancy that is urgently needed today.

The MTA resolution cites the Intergovernmental Panel on Climate Change’s conclusion that by 2030, carbon emissions must be reduced to 45% of their 2010 levels. But this conclusion may be too conservative, with other climate scientists warning that more drastic emergency measures are needed to mitigate the threat of ecological collapse.

The MTA resolution explains that in the past the union has fought against the expansion of charter schools, as well as for greater funding for education, but recognizes that such education-centered reforms don’t address today’s historic crisis:

While such a bleak projection about the impact of environmental change is terrifying, it’s not off the mark. Only the most reactionary apologists for Big Oil, or people living in denial, can ignore the urgency of “the environmental question” today.

The teachers’ resolution proposes a mass fight for a Green New Deal (GND) to reduce carbon emissions, calling for teachers to lead an escalating strike wave that could culminate in a general strike:

Maybe, when our grandchildren ask us how the Green New Deal was won, we can say it started with students—and then with us. That when the teachers went out on strike in 2019, others followed. First the nurses, then the hotel workers. Next came the TV writers, the teamsters, and the flight attendants. A general strike shut down the whole country until Congress passed a Green New Deal that the president signed into law. Millions of Americans soon started at the kinds of green jobs-with-justice that reshaped this country and saved the planet. We faced the crisis, wrestled emissions to net-zero, and put out the fire.

That an American union, representing over a hundred thousand teachers, would call for “a general strike [to] shut down the whole country until Congress passe[s] a Green New Deal” is a remarkable sign of the times! Growing numbers of people can see through the logic of a system that prioritizes profit above all else. The basic reality is not hard to grasp—capitalism has brought human civilization to the precipice of a catastrophe, and if we as a species are to survive the anthropocene, we need to take drastic action to change course.

The few will continue to benefit from our fossil-fuel economy while the many suffer. Unless we stop them. There are more of us than there are of them. If only we’d remember that. If only we’d act like it… Which side are we on? And what are we willing to do about it?

And the Massachusetts teachers who fought for their resolution have a clear answer: massive class struggle to stop the fossil-fuel companies and compel the U.S. government to reshape energy production in a manner favorable to the working class and society.

First the Students, then the Working Class

The MTA’s important initiative comes on the back of historic student activism. Many have heard the name Gretta Thunberg—the Swedish teenage activist who began a weekly Friday school strike to demand governmental action on climate change. Millions of students around the world have taken part in internationally coordinated strikes.

Now, this youth activism has entered the consciousness of the most objectively powerful group on earth: the working class. The Massachusetts teachers who today are calling for a national strike to win a GND are responding to the students’ challenge. In fact, months before the recent MTA strike resolution was passed, teachers saw the student activism first-hand in their own schools and supported the youth climate strike.

The Green New Deal is generally understood to be a far-reaching government initiative to reduce carbon emissions by putting strict regulations on those sectors of the economy that are most detrimental to the ecosystem. The mass support for a GND is a progressive development that socialists should embrace. A massive government program to create green jobs, for instance, would reduce unemployment and underemployment, giving the working class better leverage to fight capital. Similarly, strict checks on capital’s ability to relentlessly deplete natural resources and pollute the environment would be a step forward.

At the same time, the type of Green New Deal being embraced by much of the Democratic Party establishment has drastic shortcomings. The Democrats want to develop green capitalism. But so long as the world is divided into competing, unequal nation states, governments and the wealthy elites they serve will continue to employ whatever strategies they can to “get ahead” economically, politically and militarily. An expansionist, profit-driven social system cannot ensure harmonious and rational environmental policies.

The most effective way to reduce carbon emissions and minimize the suffering caused by climate change is to attack the problem at the root: the domination of the world by a class of unelected and unaccountable billionaires that enrich themselves at society’s expense. A real solution to the ecological crisis demands that key sectors of the economy such as energy production, transport and heavy industry be taken into public ownership and democratically run to meet human needs. Thus, while anyone concerned with ecological destruction should support the call for a general strike to win a Green New Deal, we ultimately need socialism, workers democracy and a planned economy.

Correction: A previous version of the title incorrectly stated that the MTA resolution had called for a general strike.