No one knows what was in South Korean student Cho Seung-Hui’s head as he fired. In the end, 32 people died and another 20 were wounded in the two shootings at Virginia Tech, leaving Americans across the country and people throughout the world in disbelief. The media and the Bush administration declared it a “national […] 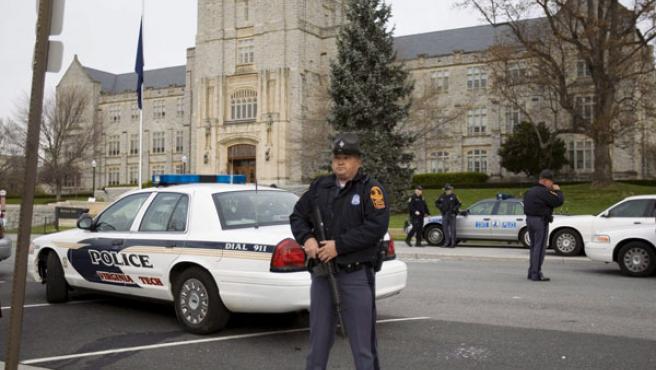 No one knows what was in South Korean student Cho Seung-Hui’s head as he fired. In the end, 32 people died and another 20 were wounded in the two shootings at Virginia Tech, leaving Americans across the country and people throughout the world in disbelief. The media and the Bush administration declared it a “national tragedy.” And not for nothing; it is the biggest school massacre in US history, and it has reopened the debate on the possession and sale of weapons in the most armed country on earth. Since 2004, more than 148,000 people have died from firearms, that is to say 30,000 a year, an average of 81 people daily; one person murdered every 18 minutes. Thirty-nine percent of homes have a firearm, 3 to 4 million firearms are sold every year, and between 1 and 3 million in parallel markets. Getting ahold of a weapon in Virginia is so easy that even a 12 year-old boy can go in a gun shop and buy an assault rifle. An 18 year-old minor cannot buy alcohol, but he can buy a weapon.

The Second Amendment to the US Constitution states, ” … the right of the people to keep and bear arms, shall not be infringed.” It is obvious that everything is relative. An African-American in the US with a weapon is considered a murderer, an Arab-American, a terrorist, a Latino, a drug trafficker. And, as several human rights organizations have warned since the massacre in Virginia, any Asian-American carrying a weapon will be a believed to be a potential assassin. The issue is not weapons in themselves, but about who has the right to possess them and who does not, and it is here that the use of the “law” by profoundly reactionary organizations like the ultra-right militias and the NRA (which boasts the most virulent racists in America) is laid bare.

Four days before the massacre in Virginia marked the eighth anniversary of the massacre in Columbine, Texas, and a long series of similar ominous anniversaries. On that occasion, video games, music and television were blamed. However, it is no accident that this type of atrocity occurs most frequently in the US, which is not only the main producer and exporter of weapons internationally, but uses them to invade and occupy countries around the world according to its interests. In each of these incursions those killed are classified as “collateral damage” and the rapes and abuses, as mere excesses. In a country where only a few months ago, torture was recognized as a valid “unconventional method” for interrogating those “suspected of terrorism,” are the repeated massacres and slaughters extraneous facts?

In a fiercely competitive society, with growing social inequality, millions of people are educated in this “doctrine” in which the defense of one’s own interests is intimately connected with annihilating a potential enemy. In US history, this “enemy” constantly has changed appearance and ideology both inside and outside of the country: blacks, Germans, “reds,” Latinos, and today, the terrorists.

For every Cho in a US university, there are several 23 year-old US Marines carrying lethal weapons in occupied Iraq. Every parallel is objected to with false indignation, “Who could think about Iraq in this moment of national stupor?” However, there is a relation so close, and so intimate, between both things, that it is impossible to separate them.

The US is the country where there are the most weapons in private hands: it is estimated that 60 million people possess a combined arsenal of 200 million weapons, although exact official figures do not exist. That being the case, it is almost impossible to carry a bottle of shampoo onto an airplane or get through US Customs with an Arab or Latino last name.

As an example of the irrationality of Cho’s society, the Marines facing trial for unnecessary violence in Baghdad, after raping a 14 year-old girl and murdering her and her family didn’t even bother to justify their actions. “It just happened,” they said. In Afghanistan, according to one report, the Marines “used excessive violence” when firing a machine gun from a distance of 15 km, murdering 12 people, a baby and three elderly people among them.

Even more tragic is the fact that this massacre gives us an idea of what it must be like to live in Iraq or Afghanistan. Will their family come back from school, from work, from the university? No one knows-It will depend solely on the savagery of the next attack, on how many times that Marine will pull the trigger, or on the power of the next bomb.

The existing anger is understandable, as are the demands for laws to restrict selling and possession of weapons. But it will not be the Republican and Democratic imperialist elite nor the Supreme Court who put an end to it. It is these are the ones who give their blessings to torture and make it law, the ones who subject the masses of the US and the world to capitalist corruption. Barbarism sounds remote and old-fashioned, but it showed its face once more in the most powerful country on earth. Sadly, there is no simple answer to the problem of violence in a country based on the most brutal forms of violence: invasions, occupations, and planning coups d’état. The violence within the US is only a reflection of the aggressive imperialist policy of the US to alleviate the increasing decline of its dominance.