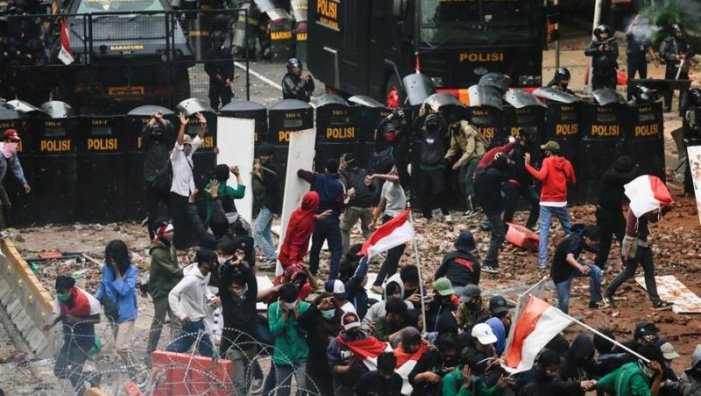 At a press conference on September 28, the Indonesian Trade Union Confederation (KSPI), Confederation of All Indonesian Workers’ Union (KSPSI AGN), KSPSI Yorrys, and the national welfare movement (GEKANAS) together called on the country’s parliament and central government to reject passage of the so-called “Omnibus Bill” — neoliberal reforms touted as “job creation” — when it came up for a scheduled vote on October 8. The next day, they began holding continuous protests in front of the parliament building and at the Coordinating Ministry for Economic Affairs. On October 5, the contentious bill was passed anyway, escalating the demonstrations.

Indonesian unions have shared videos on social networks that show scenes with thousands of protesters, most wearing masks, in locations across the island of Java — including Jakarta, Purwakarta, and Semarang — singing the national anthem. According to the unions, at least 2 million workers participated in the protests (mainstream media outlets such as EFE, Reuters, and Associated Press reported that only thousands participated). Student unions said they would also be joining in. In addition, Indonesia’s largest Islamic organization, Nahdlatul Ulama (NU), has also voiced opposition; its leader KH Said Aqil Siroj stated that that law would benefit only capitalists, investors, and conglomerates, and would “trample” on ordinary people.

There were some clashes with police. In one incident, authorities deployed riot control groups that used tear gas and fire trucks as protesters tried to break through a police barrier about 750 meters from the presidential palace in Jakarta, the capital.

Joko Widodo, Indonesia’s president, was in the state of Kalimantan on a working trip about food security in the area, which has led to accusations that he was fleeing the protests in the capital — a charge his office denied. But the president has not spoken out about the demonstrations, reported the Jakarta Post.

The large, mostly peaceful demonstrations began Tuesday on the Southeast Asian archipelago. Several unions called for a strike to demonstrate their rejection of Omnibus Bill approved on Monday by the Indonesian Parliament, which includes some 70 new laws and regulations aimed, according to the government, at creating jobs and attracting investors.

The reform is an attack on workers’ labor rights, including the minimum wage and some unemployment benefits, and also relaxes environmental regulations. It will have a destructive impact on a region already badly damaged by floods and fires.

“The National Federation of Trade Unions (KSPN) announced on Tuesday that it had set up a special team to study the long battery of laws with the intention of going to the Constitutional Court to challenge articles that violate the Indonesian Magna Carta and attack workers’ rights,” the Jakarta Post reported on October 8.

In a speech prior to the vote, Minister of Coordination for Economic Affairs Airlangga Hartart defended the reform, claiming it was necessary to “facilitate foreign investment.”

What Does the Law Say?

The reform eliminates the sectoral minimum wage in favor of new, lower minimums established by regional governors. It will reduce severance pay to a maximum of 19 months of salary, depending on the length of time a worker has been on the job — replacing the current maximum of 32 months’ pay. In addition, a new government fund will provide an additional six-month payment to the newly unemployed, subsidizing the expenses businesses would have incurred. Allowable overtime will be increased to a maximum of four hours a day and 18 hours per week. Companies will be required to give workers only one day off a week instead of two, which is detrimental to workers’ rest and leisure.

Regulations on subcontracting have also been cut back, as have restrictions on jobs migrants can take. The law also relaxes environmental standards, and companies will now be required to present environmental impact analyses only if their projects are considered high risk.

Indonesia is the world’s fourth-most populous country, with nearly 300 million inhabitants across 17,000 islands. While the population is overwhelmingly Muslim, it is a country with an ethnic, religious, and cultural diversity that is expressed in its regional divisions. It is, by Gross Domestic Product (GDP), the 16th-largest economy in the world, but lags behind other Southeast Asian countries, such as Vietnam and Thailand, in terms of foreign investment.

In that region, an atrocious level of competition is playing out as countries try to entice the gradual relocation of basic manufacturing companies from China amidst the aggressive trade war with the United States, which is seeking better competitive conditions. The Indonesian government wants to position the country as attractive for investment, but at the cost of destroying the rights of workers and the oppressed.

GDP is forecast to contract between 0.6 and 1.7 percent this year thanks to measures implemented to combat the Covid-19 pandemic. It will be the country’s first recession since the Southeast Asian financial crisis of 1997-98, and will be unloaded — as we are already seeing — on the backs of the powerful working class.

Indonesia also has had its share of bloody struggles. In 2019, combative youth waged a strong fight against a penal reform that criminalized sexual orientation and lifestyle choices.

All this is making it difficult for the Widodo government to move forward with its plans.