Massive Turnout on Day One of Minneapolis Teachers’ Strike

Over a thousand people including teachers, students and community members showed up to show solidarity on the first day of Minneapolis teachers’ strike. All workers must join them in this fight for racial justice, women’s rights and against defunding public education. 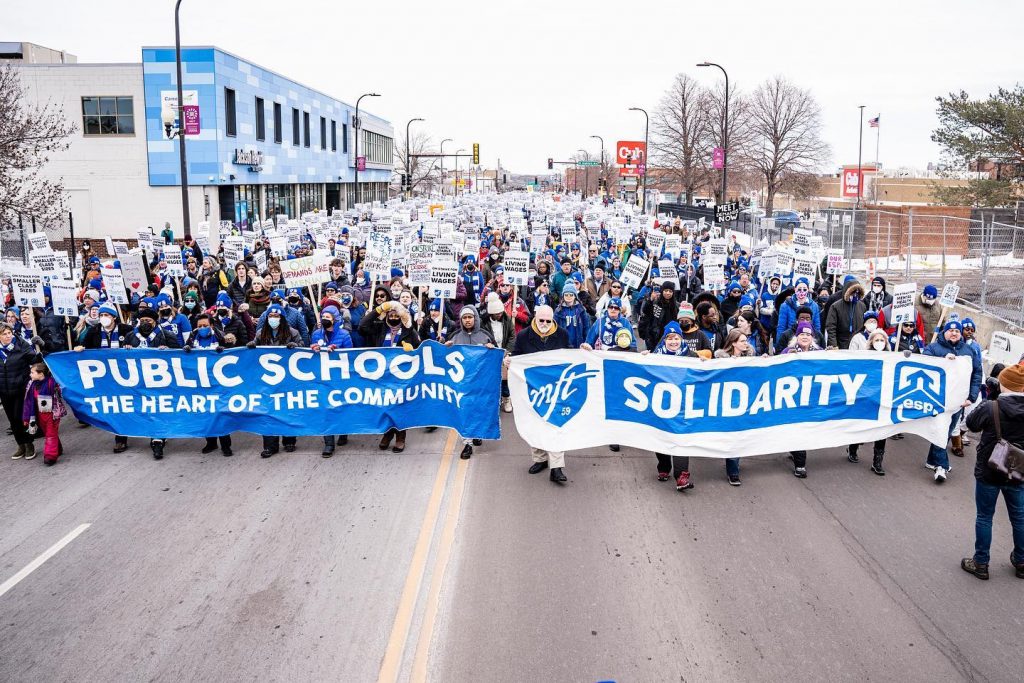 For the first time in 50 years, Minneapolis public school teachers and educational support professionals (ESPs) went on strike yesterday to demand better wages, smaller class sizes, mental health support for students, and retention of educators of color. The last time Minneapolis teachers went on strike was in 1970 when it was illegal for public employees to strike.

The strike began at seven o’clock in the morning on Tuesday. Teachers, students, parents, and their supporters picketed outside their schools and made speeches. Supporters brought coffee, snacks, and hand warmers. Many of the picketers carried signs calling out Minneapolis Public Schools (MPS) superintendent Ed Graff for dismissing the demands of students or teachers.

Left Voice spoke with educators outside Roosevelt High School in Minneapolis. Teacher and activist Marcia Howard said, “They [the school district] pay poverty wages to ESPs. There are 17-year-old students who can leave and go to Target and make more money than the educational support staff even while working a part-time job.” She  described the school budget as a “moral contract” that reveals the district’s true priorities. The strike, according to Howard, is evidence that  teachers, students, and the community are not among those priorities.

We also spoke with Christine Patlan, an ESP at Roosevelt High School who said that she is striking for fair pay. A mother of three young adults, Patlan encouraged her children to become educators, but found they earned more in the service industry than they would as teachers. She said that she wants the current and next generation to be fairly compensated for their labor.

At noon, over a thousand people including teachers, students, parents, and community members marched from Minneapolis Public School Nutrition Center to the school district office.

MPS officials paid lip service to retaining educators of color, while disproprotionately laying off and excessing these very teachers. The hypocrisy was not lost on the speakers and attendees , whose demands include protections for educators of color.

The Minnesota DFL (the Democratic Party of Minnesota) recently published an open letter endorsing the educators’ demands. Yet this letter is effectively meaningless; all but two of the nine elected school board members carry Democratic Party endorsements. Teachers have also been frustrated about the closed-door contract negotiations, which leave the rank and file as well as the public in the dark.

The educators rejected the school district’s excuses that there aren’t enough funds to meet the teachers’ demands. Minnesota has consistently had budget surpluses for the last nine years, with a record surplus of $9.3 billion dollars in 2021. The city of Minneapolis, which is run by Democrats, has offered $7,000 payments to police officers to boost staffing but claims that it does not have money to invest in public education.

Teachers also spoke out against disingenuous allegations from the school district and pro-privatization-of-education groups who claim that strikes harm students. The vast number of students and parents supporting their teachers at the rally clearly showed they are not falling for this false narrative. Teachers’ working conditions are students’ learning conditions. When teachers are spread thin and underpaid, students suffer, as well. One of the slogans that crystallized this concept at today’s rally was, “What about the students?” To which the crowd responded, “Exactly.”

Their demands intersect many areas of class struggle. They are demanding fair pay for their lowest paid coworkers who are disproportionately people of color. They are demanding safe working conditions for a workforce that is predominantly women. They are fighting tooth and nail against the continued exploitation of their labor by a capitalist system that puts profits over lives. A win for the Minneapolis educators would have resounding positive effects for the labor movement, students, Black struggle, and the feminist movement.

Many educators on the picket line told us that this is the first strike of their careers. Yet based on today’s turnout and energy, these teachers, students and community members are more than ready for this fight. The rally closed out with a call to meet at the picket lines again tomorrow and to continue the fight for a fair contract. All workers and students must join them in this struggle.