Melania, Get off the Stage

Last week, Melania attended two events that addressed women’s rights and women’s leadership. There is an attempt at branding Melania as a “women’s rights” first lady, despite her husband’s sexism in words and actions. 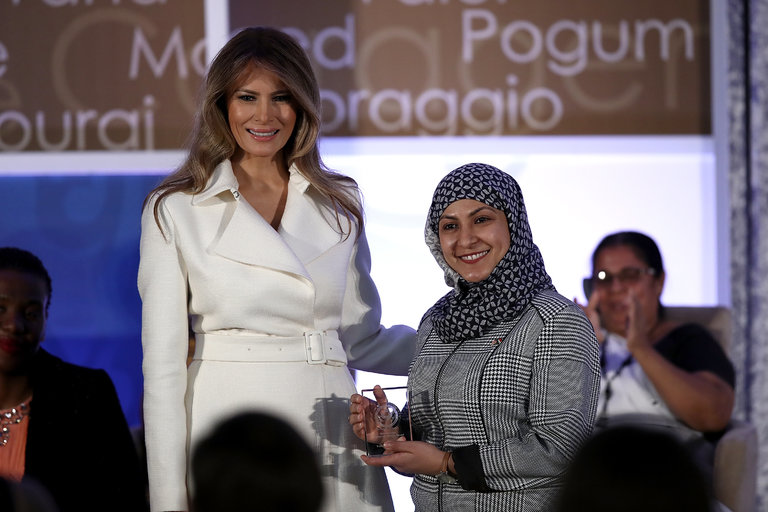 Image from the New York Times.

Melania Trump is married to the most openly sexist President in recent US history. Thanks to his Twitter assault on Rosie O’Donnell, Megyn Kelly, Hillary Clinton, ex-beauty pageant winner, Alicia Machado, Donald Trump’s sexism was notorious even before emergence of the infamous “pussy grabbing” video. In this scandalous tape, which many believed would cost him any chance at winning the election, Trump openly admits to sexually assaulting women. Yet the video did not cost him the election, and now we are in month three of a Donald Trump Presidency.

Melania Trump is well known for her plagiarized Republican Convention speech, where she repeated almost verbatim Michelle Obama’s speech from Democratic Convention of the previous election. Later, she spoke on her husband’s behalf after the pussy grabbing video, and then she stood by silently and slightly behind Trump at inauguration. Since then, Melania has largely stayed in the shadows, continuing to live in New York City, at a cost of more than $1 million per day.

On March 29, Melania Trump stepped out of the shadows to attend the 2017 Secretary of State’s International Women of Courage Awards. There, she gave a roughly 10-minute speech and handed out 12 awards to women from around the world who had fought for women’s rights, often after surviving abuse and violence themselves. In her speech, Melania said, “We must continue once again to shine a light on the horrendous atrocities taking place around the corner and around the globe. We must continue to fight injustice in all its forms, in whatever scale or shape it takes in our lives.”

Later, she and her husband attended the Women’s Empowerment Panel, where Donald Trump spoke about Melania’s high poll numbers and went on to explain exactly how he would be advancing a women’s rights agenda. First, he again promised to provide affordable childcare to women, via tax breaks which will primarily benefit middle class and wealthy people.

Trump then went on to talk about the sector of women whom he would empower with his politics and proposals: women entrepreneurs. If the power of women entrepreneurs were unleashed, he argued, it would be good for the economy and for women. He topped off his speech by telling the audience that Melania thought that the panel about women’s empowerment was of central importance, which is why she insisted on coming.

These two important public appearances point to the possibility of women’s rights becoming Melania’s niche as first lady, according to CNN. Both Melania and Donald’s lip service to women’s rights demonstrates just how empty the fight for “women’s rights” can be. It is a clear example of the dynamic that Nancy Fraser describes in her article “How feminism became capitalism’s handmaiden”. Fraser writes, “A movement that once prioritized social solidarity now celebrates female entrepreneurs. A perspective that once valorised ‘care’ and interdependence now encourages individual advancement and meritocracy.”

In this sense, the project of branding Melania as a “women’s rights” first lady has a great advantage and a great problem. The advantage is that Melania is the latest and perhaps the most absurd in a long line of neoliberal feminists who have spoken out about women’s rights while actively promoting policies that further oppress the most marginalized women in the US and around the world. It is this kind of neoliberal feminism that neither understands nor fights against capitalism, imperialism, or systemic oppression, that opened the door for Donald and Melania Trump to claim the mantle women’s rights.

In Melania’s case, the fight for women’s rights is almost entirely devoid of meaning. Melania dismissed her husband’s admitting to sexual assault as “boy talk” rather than addressing the fact that women live in a constant state of fear of sexual violence due to such “boy talk” that all too often, is taken to action. Every 98 seconds, someone in the US is sexually assaulted.

Of course, Melania’s speeches do not mention the fact that Trump has escalated bombings in Iraq and Syria, killing a record numbers of civilians and causing experts to wonder if the Pentagon has lifted protections against civilian bombs. Apparently, the killing of women and children in the Middle East is not one of the “horrendous atrocities” upon which we must, “shine a light.” In the domestic realm, the health care bill that Donald Trump attempted to pass only a few days before would cut federal health insurance requirements for basic benefits, including maternity care. The bill also included “manager’s amendment” which would give states the power to revoke Medicaid from new mothers who do not find work within two months of giving birth.

The fact that Melania can speak about women’s rights with a straight-face has everything to do with the fact that, before her, Hillary Clinton’s own neoliberal brand of “women’s rights” had already emptied this term of any radical meaning. In foreign policy, both Clinton and Donald Trump put forth very similar policies that spell misery, exploitation and death for millions of women around the world. In domestic policy, both Clinton and Donald Trump support the prison industrial complex, with Bill Clinton vastly expanding the prison system and Donald Trump branding himself the pro-police “law and order” President. In 2006, both Clintons and Obama supported a border fence, now a centerpiece of Trump’s xenophobic policies.

However, Melania’s new image as a women’s rights crusader is faced with a big problem: the increasing number of women who reject the neoliberal feminism that she represents. There is an increasing number of us who see that either we fight for the rights of all women, or we don’t stand for women’s rights at all. As Zillah Eisenstein says, “When anti-imperial, anti-racist feminists specify Palestine, or world hunger, we do not divide, but rather open the gates to an inclusive humanity. How can you ever be too inclusive? That is like saying, as neoliberals do, that you are too equal, or too free, or too democratic, or too feminist.”

Melania, get off the stage. There is a new women’s movement that sees right through you and that rejects your individualistic solutions. It is a movement that is anti-capitalist, anti-imperialist and anti-racist. It is built on solidarity and seeks to destroy this system that creates nothing but misery for the majority of world. We took the streets on March 8, and we are organizing to take the streets again on May 1. One day, we- the working class and oppressed- will not only take the streets, but also the stage, leaving no room for your brand of fake feminism.