Memories of Leon Trotsky, From His Grandson

Esteban Volkov was thirteen when assassins tried to murder him. Because his grandfather was Leon Trotsky. Now ninety-one, Volkov keeps Trotsky’s memory alive at a museum in Mexico City where Trotsky spent the final years of his life. 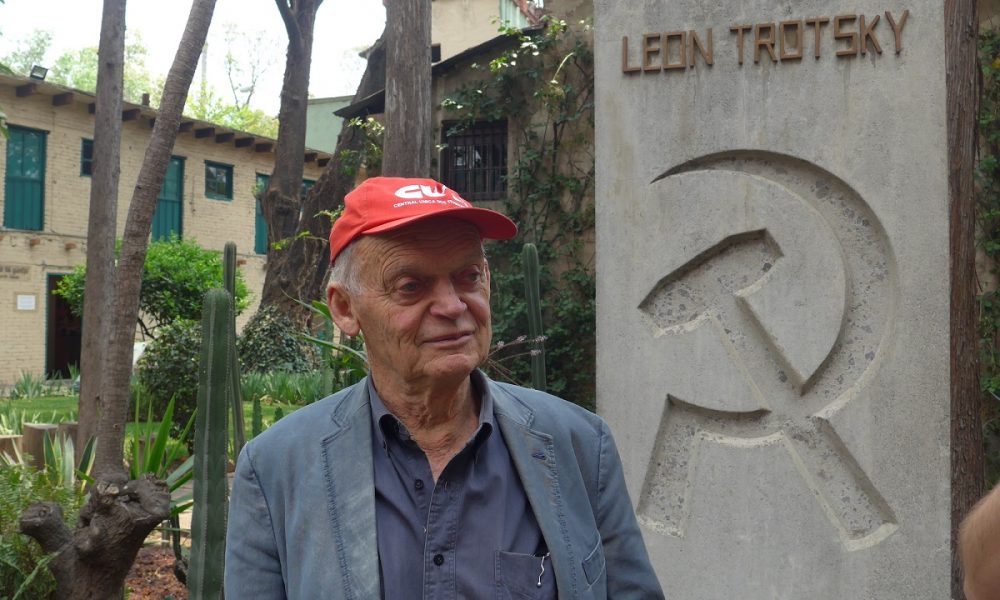 The building is one of countless villas in Coyoacán: A house with a garden behind a very high wall. Coyoacán used to be a rural town outside of Mexico City where artists sought tranquility. Today it’s a hip neighborhood in the middle of the megacity, a few steps from a subway station. The garden full of cacti could be idyllic — if it weren’t for the noise and smell of the highway.

When we arrive, Volkov is waiting for us in a gray suit and a red baseball cap from the Brazilian trade union federation CUT. His deep-set eyes look severe – but soon he starts laughing. Without any noticeable difficulty, he guides us through the house — the residence where Trotsky spent the final years of his life. We see the bullet holes, the walled-up windows, the heavy steel doors — a bit like a prison. All this is now a museum for his family, the majority of whom fell victim to political murders.

Trotsky was forced to leave the Soviet Union in 1929 and found refuge on the Turkish island of Prinkipo. After a few years, he was expelled from Turkey, then from France and Norway as well. In 1937, he received asylum in Mexico.

Trotsky’s daughter, Zinaida Volkova, suffered from severe depression and took her own life in 1932, leaving behind a small son, Vsevolod “Seva” Volkov. After briefly joining his uncle — who had to flee to Paris to escape the Nazis, and was subsequently killed by Stalinist agents — the young Seva moved in with his grandfather in Mexico.

He still recalls those months with the famous revolutionary, going on cacti excursions and narrowly dodging assassination attempts. Then, on August 20, 1940, Trotsky’s luck ran out. He was killed by a Stalinist agent.

Life went on after. Sedov became a Mexican citizen and adopted a Spanish version of his name: Esteban. He studied to be a chemist, and invented a method for the industrial production of the contraceptive pill.

But he didn’t forget his grandfather’s legacy. Since 1989, Sedov has served as the director of the “Museo Casa León Trotsky.”

What are your first memories of Leon Trotsky?

I was thirteen and a half when I first arrived in this house – from Paris, with Alfred and Marguerite Rosmer. The contrast was stark. Europe in winter is gray, gray, gray. I came from a sinister climate full of grief: After the death of my uncle Lev Sedov, I was emotionally damaged. Sedov died in February 1938. His widow wanted to keep me in her care, and grandfather had to resort to lawyers. In August 1939, I finally came to Coyoacán.

My first impression was: Color! Mexico is a country full of colors. At that time, this was a village completely isolated from Mexico City. You had to go through fields of beets and corn to reach the city. The dirt roads turned to rivers when it rained.

Was it safer for you here?

Somewhat. But the Stalinist secret service was active here as well. The first assassination attempt was on May 24, 1940. I hid under my bed. The assassins came into my bedroom from three different directions and emptied a pistol into the mattress. Seven or eight shots, one of which hit my big toe.

They shot at a child?

Of course. They murdered many Trotskyists and wanted to eliminate his entire family. Trotsky’s son, Sergei Sedov, who remained in Russia and was not interested in politics, was also shot.

In May 1940, a young bodyguard from the USA named Sheldon Harte had just arrived. He was a Stalinist agent and opened the door for the assassins. Later they killed him and buried his body in a park outside the city. In the Stalinist archives it was claimed that he had criticized his comrades – if he had known that they intended to murder the child as well, he would not have participated, he said.

So he was branded a traitor. That is how the Stalinist system worked: when something went wrong, you had to find someone to blame. And in this case, it was very easy to blame the American: they said Harte had warned Trotsky who then hid in the cellar.

The story was filmed this way several times. But that is absurd. As if grandfather would have left me alone.

How did it really go down?

Grandfather took pills to help him sleep. When the shooting started, he first thought it was fireworks from some Mexican religious celebration. [laughs] His partner Natalia jumped right up. She dragged him to his feet, pushed him into a dark corner, and saved his life.

What happened after the attack?

The Stalinists tried to present it as a farce that Trotsky had organized himself. They paid a policeman and two cooks who had worked here to give false testimony. All three said that the guards had been nervous that night and had been talking in grandfather’s office until very late. In the beginning, the police fell for this lie.

But more than twenty people were involved – gangsters and Stalinists. And somehow they caught one who was bragging about it in a bar. The famous painter Alfaro Siqueiros, a leader of the Communist Party, had led the plot. Siqueiros was briefly in prison, but then he emigrated to Chile.

How did life change in the house after that?

Before, we often had trips to the countryside with friends to collect cacti. Grandfather was a big cactus fan. There is a great variety in Mexico, and the challenge was to find new species. We spent hours traveling in the car on gravel roads.

After the first assassination attempt, these trips stopped. I went to school every day, but grandfather was basically a prisoner in his home.

Originally, an Italian family had rented out this house. The Trotskyist party in the USA collected money and bought it so that they could build fortifications, wall up windows, and construct bunkers on the roof. Trotsky himself knew that the next assassination would not be a simple repetition.

Could you not have fled to a different place?

It would have been the same. Trotsky’s secretaries were criticized for not taking the right precautions. But Trotsky knew that he had only received a short respite. Perhaps one could have extended his life by a few months. But Stalin was prepared to do anything to get rid of Trotsky. Three months later, the Catalan Ramón Mercader was successful.

I arrived shortly after the murder. I saw a man in the corner, detained by policemen. Mercader was put in prison for twenty years.

How was your grandfather in everyday life?

Affectionate, with a strong sense of humor. He was a person with great vitality and boundless energy. If we were to look for an actor to portray Trotsky, the only one who could play the role really well would be Kirk Douglas (laughs). Douglas has that drive that was typical of grandfather.

Trotsky spoke many languages. He spoke English with the American guards, German with the Czechoslovak secretary Jan Bazan, and French with the secretary Jean van Heijenoort. He spoke French to me as well.

No, I did not know Russian anymore. At home, most of the secretaries were Americans. One of the conditions imposed by the government for Trotsky’s exile was that he not interfere in Mexican politics. Therefore, the rule in the house was to not hire Mexican assistants.

But there are numerous essays by Trotsky about Mexican politics.

He wrote a bit about Mexico under a pseudonym, but he did not intervene in politics.

What happened to the house after Trotsky’s death?

We continued to live here. Natalia died in 1962 and was buried in the garden together with Trotsky. In 1965, soldiers occupied the house – the government’s revenge against students with Trotskyist convictions. [laughs] But after a few months they called us — they did not know what to do with the house, and so we moved in again.

We stayed another fifteen years, and then we opened the museum. In 1990 it was expanded to include an institute for the right to asylum. Some empty squash halls were refurbished to create an auditorium, an exhibition space, and a library.

I myself always stayed on the margins of politics. Grandfather had told the secretaries: if you talk to my grandson, nothing about politics.

What is the significance of Trotsky today?

He had an absolute faith that socialism would determine the future of mankind. He had no doubt. But the clock of history moves more slowly than one would like. A human life is very short compared to the historical cycles.

But it is unquestionable that humanity needs a different form of social organization if it is to survive. For capitalism always reaches new levels of destruction.

What is the significance of Trotsky’s political heritage in the struggle to overcome capitalism?

Marxism is the best way to understand capitalism and the class struggle. The Russian Revolution was one of the most comprehensive in history. Trotsky prepared the revolution ideologically and participated in it practically. He defended the Soviet Union against all enemies. After Lenin’s death, he opposed the counter-revolution. We know that all revolutions have the same dynamic: an advance, then a retreat. Just like in the French or in the Mexican Revolutions, there was a Thermidor in the Russian Revolution. In concrete terms, this meant the rise of a bureaucracy, a new privileged caste that took possession of the country and the government.

Can socialism be saved from this Stalinist experience?

Stalin presented himself as the great disciple of Lenin. And the capitalist regime happily confirms this lie, in order to disparage Marxism. Trotsky’s great work was to oppose the Stalinist counter-revolution. No one has studied this process better. Many believe the struggle between Stalin and Trotsky was a struggle for power. This is certainly true for Stalin. But it is not true for Trotsky at all. He was not interested in power. He wanted to maintain the principles of the October revolution.

If Trotsky had wanted to seize power, he could have done this with the Red Army in half an hour, for he was its leader. But that would have led to a military dictatorship. And that was not his goal. In the end he could not stop the counter-revolution – but he studied this process intensively. It was therefore particularly important for him to train the young comrades politically. After dinner, he always had very long discussions with them in his office.