A photo-journalist and activist who was at the Met Gala told Left Voice about the brutal police attack on protesters and gives a perspective on AOC’s participation in the event. 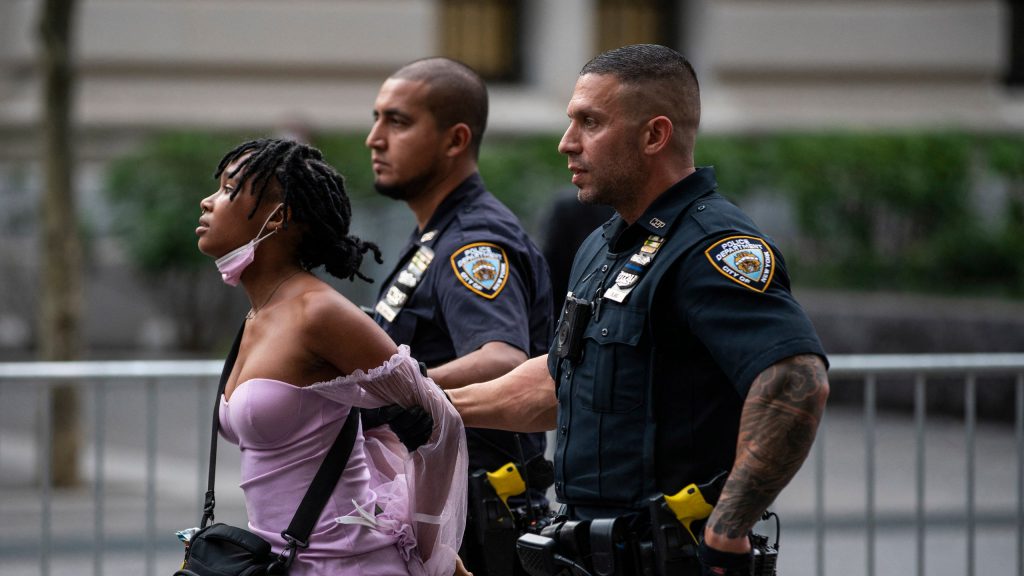 The Met Gala, a fundraiser for the Metropolitan Museum of Art’s Costume Institute that is also a gathering of celebrities, politicians, and the wealthy and well connected took place on September 13. The bourgeois press coverage focused on the celebrity spectacle, nearly ignoring the horrific police attack on abolitionist activists protesting outside the event, many of whom were arrested. Left Voice spoke with Prince, a photo-journalist and activist who was on the ground.

What’s your background in activism?

I started in college. I have my own YouTube channel. And, you know, through that YouTube channel, I did videos on topics related to race and racism. One of the biggest videos I did was talking about victims of police brutality, just keeping people informed of the things that were happening. And then I got involved in the protests in May last year, in May and June, after the death of George Floyd. I did that for basically all of that summer. And that continued into the fall and the winter all the way up until now. Around the winter time is when I found my camera. And that’s when I started bringing my camera along and I started doing the whole photography thing.

Would you consider yourself press, an activist, press and an activist? How would you define what you’ve been doing?

Mostly what I do is basically what I was doing with the YouTube channel. I take photos and post along with them what the action was about, what we were there for, the message we were trying to send. I try to use my Instagram to keep people informed of that. I would say it’s kind of like photojournalism, in a way.

Do you think cops target you more when you bring your camera? How do you think the camera has affected your experience at actions?

Were you taking photos of the action at the Met Gala? How did you hear about it and what were the demands that you guys were making?

What was the atmosphere when you got to the Met Gala? Were a lot of people out? Was it tense?

I’ve been thinking about it and talking about it ever since that day. There were tons and tons of people. They were all behind these barricades set up along the sidewalk. A lot of them were dressed up and you could tell they were all waiting for something to happen. The atmosphere was kind of like people just waiting to potentially see their favorite celebrity. I just wasn’t a fan of that, you know?

What do you think of the contrast of being at this protest and then all of these celebrities that a lot of people might look up to are attending basically this expensive party?

I feel like a lot of them had no idea that this was happening outside or maybe they didn’t see anything. But I feel like they probably got some wind of it through social media after. I guess they didn’t feel like they had any responsibility to comment on it. I wish that wasn’t the case. I wish they would use their platforms to speak about what was literally happening right outside the building of the party they were attending. I think there was one person who attended that commented on it. I’m forgetting the person’s name. But there were a lot of other recognizable people there. So I wish there was more engagement of that.

How long did it take before cops started harassing and arresting people? How did that play out?

That’s also an interesting thing, because when we first got there, we were waiting around for a good while — I would say about an hour. I was just standing. I didn’t know what the waiting was for. I didn’t ask. I was just waiting for something to happen. Once things did get started, it went from zero to one hundred. I heard someone chanting in the distance, and then we were told to chant along with them. So I just started chanting as well. And then I followed the voice. And next thing you know, we were in the street. We were taking the street and surrounded by all the people. We are on the other side of the barricades, now in the street.

I don’t know if you heard about the person who was doing the speech. It surfaced all over the Internet and has been everywhere else. They’re only 18 years old. They did that powerful speech. And I was just there listening. I was taking photos. I was also listening to the powerful words they were sharing. After their speech, we were doing a lot more chanting and there were fliers being passed out letting people know why we were there and that they should be fighting there with us. There was a lot of that, and then that’s when the cops took the street. They were in front of us in front of our group, then they put on the speaker telling us that we had to get out of the street, that we were preventing traffic from moving. They started pushing us back. That’s when the brutality started happening — as they were pushing us back. There were people in the front preventing them from pushing us back. Then they tried to grab one of those people — and they did, and they grabbed other people as well. Then we got pushed to the sidewalk. We’re on the sidewalk and the police proceeded to grab comrades off of the sidewalk as well. They even grabbed them right off the sidewalk. That’s how it led up to the brutality from the police.

How would you say the repression compared to other actions you’ve been to?

I’ve witnessed other stuff that was similar. What was different about this action is that they didn’t even care about all the people that were watching. I would say that‘s what separated it from other actions I’ve been to where they’ve used this type of brutality — the number of people that were there, and they still didn’t care about their actions.

What’s your take on AOC’s participation in the event?

Prince: I was seeing a lot of the reaction from people on social media about the dress. I follow people who are involved in the movement here in the city. It was very consistent that all of them weren’t fans of it. And especially after what happened in front of the Met Gala particularly, I wasn’t a fan, either. I kind of thought it was hypocritical that she would wear this dress up as “Tax the rich.” But then she’s at this event that’s very expensive to attend and among the rich. I guess she was trying to make a statement, but it wasn’t really making any real change.

Do you think people like AOC and Jamaal Bowman are doing enough for the movement against police violence that caught on last summer?

Do you think that Biden getting elected has caused activism to die down? Or do you think maybe other things are also contributing to that?

I feel like there were people who felt as if all our problems were solved because everyone was elected. That may have gotten some people to remove themselves from the movement because they feel like we accomplished something big from that.

What do you think people should know about what went down at the Met Gala?

The main thing people should know — and this is what was being amplified at the Met Gala — is Black lives still matter. There are still lives being lost. You have Mike Rosado, who was killed in the Bronx a little over two weeks ago. There are a lot of lives still being taken by the police. The fight isn’t over. The fight is still very much happening and this is something that people should be a part of and getting themselves involved in. There’s lives being lost, people facing homelessness, and there are still very real problems that are happening.

If people join the fight , we have a better chance of having these issues get closer to being solved.