The Republicans face a stunning defeat in Alabama thanks to #MeToo and Black voters. 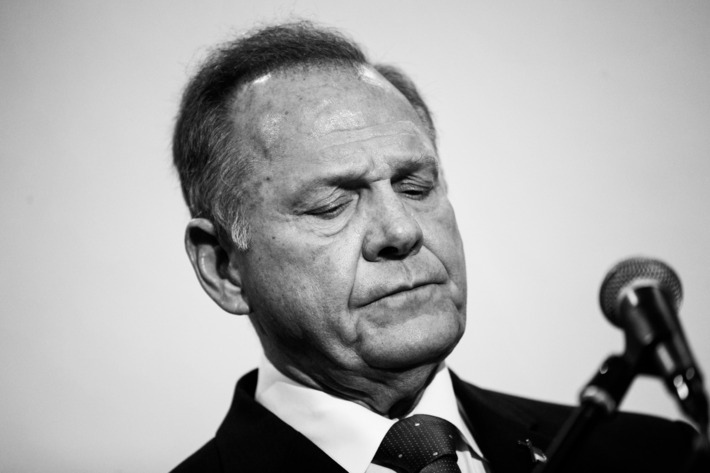 Image from The Cut

Alabama, a solidly red state where Trump won the election by a landslide–over 28 points, gave Republicans a distasteful surprise on Tuesday night when they elected their first Democratic Senator in 27 years. While the Trump administration has yet to manage its first legislative victory after almost a year in the Presidency, this election result is sure to deepen the crisis in the Republican Party. As the Democrats bask in their second major electoral victory of the year, what lessons can we take from Moore’s defeat?

It’s hard to think of a worse candidate than Roy Moore. To begin with, he faced multiple allegations of sexual harassment and assault, including sexual misconduct with a 14-year-old girl. Stories of a sketchy Roy Moore hounding young women at shopping malls abound.

But Moore’s despicable behavior isn’t limited to sexual misconduct. He also said that America was last great when slavery was legal: “I think it was great at the time when families were united — even though we had slavery — they cared for one another…. Our families were strong, our country had a direction.” He is against Muslims holding office, and thinks that homosexuality is “abominable and detestable.” It’s hard to imagine a candidate that is more abominable and detestable.

Moore was unpopular among the Republican establishment and with Donald Trump even before the stories of his sexual misconduct. Trump and the Republicans backed Luther Strange in the primaries, only to be trounced by Roy Moore, who won 54.6 percent of the vote. The stage was set for another unconventional, anti-establishment Republican to join the mish-mash that has become the Republican party. Moore was Steve Bannon’s candidate and, just as with Trump, the Breitbart mogul was able to pull off the electoral victory of an anti-establishment right winger.

Once the sexual misconduct allegations emerged, many Republicans called for Moore to step down and for a time, he lost RNC funding for the campaign. But Moore hung in there and eventually, Donald Trump endorsed him– arguing that the Republicans need to maintain their majority in the Senate. On the other hand, Senator Shelby of Alabama urged Republicans not to vote for Moore, calling them to write in candidates.

Now, after the Alabama election, that majority is slipping away from Trump and his party, who now hold a slim two-vote majority in the Senate — the same Senate that was incapable of repealing and replacing Obamacare and was almost incapable of passing a tax reform bill. Cutting into Trump’s majority will make any Republican-sponsored legislation even harder to pass.

The triumph of Doug Jones is more of a rejection of Trump and of Roy Moore than a recognition of the merits of the Democratic Party candidate. There are dire problems in Alabama, the sixth poorest state in the U.S. with a poverty rate of up to 40 percent in some counties. 30% of Black people in the state live in poverty. Elizabeth Schulte in The Socialist Worker states, “Poverty is dire in rural areas of the state — where hookworm, a disease of extreme poverty that has been largely eradicated in the U.S., is back. During a recent tour focusing on poverty and human rights abuses in the U.S., United Nations investigators singled out Alabama’s rural Black Belt as the site of some of the worst conditions.” Alabama has the third highest incarceration rate in the United States. The minimum wage is $7.25 per hour, and as Schulte points out, an attempt by Birmingham to increase it was struck down in the state legislature. These issues were barely mentioned in Doug Jones’ Senate race.

Instead, he called the importance of defense spending “the most paramount thing” in the nation, specifically to the people of Alabama. He marketed himself as the candidate who will “reach across the asile” and show willingness to vote for some Republican measures. He appealed to Black voters by stressing the fact that he prosecuted the Klansman who blew up the 16th Street Baptist Church and killed four little girls — and of course, not being the guy who romanticizes the era of slave ownership.

The vote was close: Jones won by nearly 21,000 votes, less than the number of write-in votes, which stands at about 23,000. Several counties where Trump defeated Hillary Clinton voted Democrat in this election.

Roy Moore’s defeat must be read in the context of the broader #MeToo movement that is reshaping U.S. politics, forcing the resignations of politicians and the firings of actors and media moguls. It has brought to light the taxpayer dollars spent on covering up sexual harassment lawsuits and the sexual misconduct on both sides of the asile, even forcing Al Franken to resign from the Senate. It gave women everywhere the courage to say that they too have been sexually assaulted and created a climate in which those women were more likely to be believed. In the case of Alabama, the Moore campaign chose to call these women liars, although there was no evidence that this was the case.

The #MeToo movement re-opened the discussion about President Trump’s sexual harassment of women, with the women once again speaking out and demanding that Congress investigate. Apparently, this is a crisis that is not over for the President. But no matter what, Trump is unwilling to tone it down, shut up, or apologize for his sexism. In fact, he plans to double down on his disgusting comments and sexist behavior. In fact, on the very day of the Alabama election, Trump tweeted that New York Senator Kirsten Gillibrand “would come to my office ‘begging’ for campaign contributions not so long ago (and would do anything for them).”

This must also be read in the context of the massive Women’s March in January that set the stage for a year in which women have been important political subjects. The #MeToo movement and the allegations against Moore resulted in many more votes than usual for write-in candidates and, in mostly white rural counties, a 5.4 percent decline in voter participation from 2014 levels. These voters do not want to vote for a Democrat, but nor could they bring themselves to vote for an accused pedophile, either. On the other hand, the four largest metro counties combined had a 6.5 percent increase in voter turnout compared to the last midterm elections.

Although the women’s movement is certainly an important factor in explaining the defeat of Roy Moore, it was not the “women’s vote” that defeated Moore. It was the Black vote, especially the Black woman vote.

Jacobin Magazine correctly states, “Roy Moore wasn’t defeated by the Democratic Party leadership (or even just the media), he was defeated by a huge surge from Black working class voters.” Black voters turned out to vote in roughly the same numbers that they turned out for Barack Obama — they made up 29 percent of the voters — and they voted for Doug Jones. Black people voted despite institutionalized voter suppression, such as voter ID laws and laws that keep some former felons from voting. They voted despite the use of racist voter suppression tactics on the day of the vote in Alabama — such as prohibitively long lines at poll sites in Black neighborhoods and people being put on an “inactive” status list and kept from voting.

So what lessons can we learn from Roy Moore’s stunning defeat? What does this mean for the left?

First of all, the Republican party is in a crisis of epic proportions. While controlling the House, Senate and Presidency for almost a year now, they can’t seem to get anything done. Even with the likely passage of the tax plan, the narrow majority in the Senate makes any other Republican legislative victories much more difficult. Although the Bannon wing of the party was distasteful to the GOP establishment, at least they won elections. Now Moore’s loss in a Republican bastion may be a harbinger of further losses for the GOP.

To large degree, this was a referendum on Trump and his policies. With a 32-percent approval rating nationally and only a 48 percent approval rating in Alabama, his endorsement did not generate enough support for Moore to win. A 48% approval rating in a state that Trump won by a landslide indicates that contrary to what Republicans are saying, Moore didn’t lose only because he was a (deeply) flawed candidate. He also lost because of of President Trump’s unpopularity.

The Democrats want to ride this anti-Trump wave to a majority in Congress without taking up any progressive demands, such as medicare for all and free university tuition. They want to pay lip service to the Black people and women who elected them but don’t want to make any structural changes to a society based on mass incarceration and mass gender violence. This campaign strategy won in Alabama, but only when the opponent was an accused pedophile. Will it work in 2018?

While this strategy may be successful for the Democrats in the future, it is certain that the issues affecting working class and poor people in Alabama will not be addressed by the newly elected Senator — one who stresses the need for unity with the same Republican party that supported a pedophile, racist candidate and is about to pass a tax bill that should be considered an act of class war. Jones’ victory was based on an anti-Trump and anti-Moore vote demonstrates possibilities for the left to provide real solutions to the problems that plague the lives of women, Black people, and the working class. These are problems that neither Moore nor Jones — nor either of their parties — will solve.