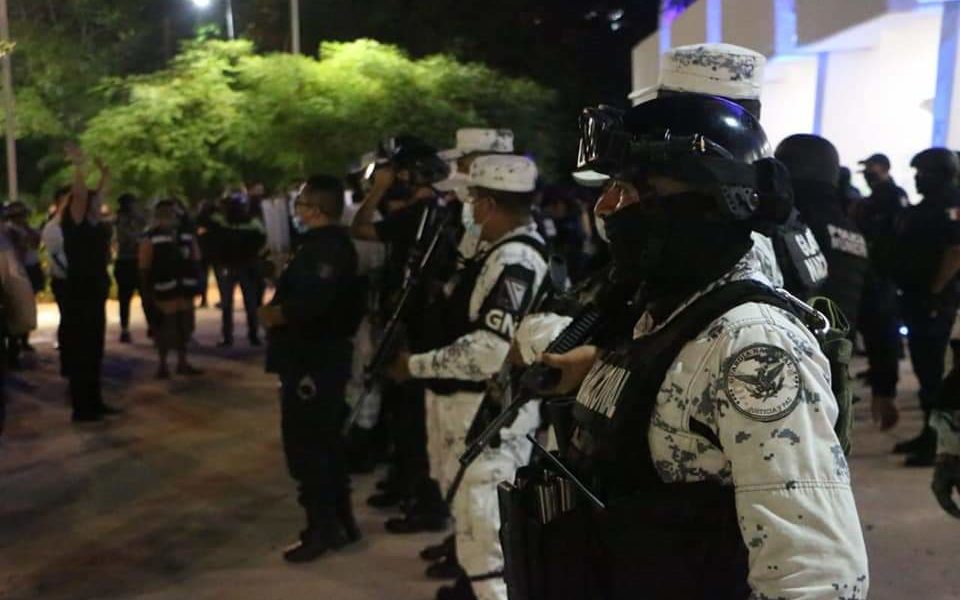 On Monday, November 9, police in Cancún, Mexico opened fire on protesters who had gathered to condemn the murder of two women there last weekend and the rampant increase in femicides across the country. Over 2,000 protesters had gathered for the demonstration and marched to the City Hall where, in anticipation of the protests, the police had closed the entrance with metal fences. Shortly after their arrival, the police started shooting at the crowd, leaving three reporters seriously injured, one of them shot with a live round.

Although state officials have condemned the police violence, this is nothing more than idle posturing. During the last few months in particular, state authorities have brutally repressed protests across Mexico, many of them feminists protesting against the femicides. In 2019 alone, there were 1,012 femicides in Mexico, the highest since records began. In the first half of this year, violence against women and femicides rose 7.7 percent compared to the same period the year before. In return, local and federal governments have not only responded with cuts to social services, but have been brutally attacking protesters who’ve taken to the streets to fight against gender violence.

Here, we republish the statement released by Pan y Rosas (Bread and Roses) — a socialist feminist organization — in repudiation of the police repression and the escalating violence against women.

On November 7, Alexis was reported missing in Cancún, in the state of Quintana Roo. A day later, the young woman, barely 20 years old, was found dead. This femicide, far from being an exception, is part of the brutal wave of violence that has been growing in Mexico for years.

Once again, the inaction of the authorities is in plain sight. It was only after television networks began to spread the news of her disappearance and an hour before her body was found that the local authorities activated the Alba Protocol (the state alert system).

Alexis’s case is not isolated. As of August, 43 women had been murdered in Quintana Roo, of which only 10 were recognized as femicides.

Since the news of Alexis’s murder spread, various women’s organizations, along with family members and friends, have called for virtual and face-to-face demonstrations. One of these demonstrations was one called at Cancún City Hall, which was brutally repressed by the police and the National Guard.

The state authorities, far from putting their efforts into solving the case of Alexis, ordered the repression of a mobilization that demanded justice for her. With tear gas, blows, and bullets, the authorities responded to the just demands of the young women who mobilized today in repudiation of the crime that cost Alexis her life.

This repression resulted in several injuries to demonstrators and journalists alike. Images and videos circulating on social media show the casings and firearm detonations fired by the police.

We hold the government of Mara Lezama, the municipal president of Cancún for MORENA (party of current president Andrés Manuel López Obrador), and Carlos Joaquín, governor of Quintana Roo for the PAN-PRD (centre-right and centre-left coalition), responsible for the repression against the demonstrators.

This repression is yet another of many instances of violence unleashed by the state against demonstrations by women nationwide, where the police and National Guard have responded with beatings and arrests. This is in line with repressions led by the government of Claudia Sheinbaum (MORENA) on September 28 in Mexico City, in Cuautitlán over the same weekend and in a municipality that is also led by MORENA, and those that occurred a few days ago in Ciudad Juárez and Oaxaca.

The response of the current government, both of the right-wing PAN and of the “left” MORENA, to the just demands against this violence and for justice for the victims of femicide is clear. Furthermore, the repressive bodies, with their excessive attacks, tear gas, batons, and bullets, have shown the true authoritarian face of local governments backed by the federal government.

We at Pan y Rosas Mexico endorse the demands for justice for Alexis. We also denounce the brutal repression exercised by the state and federal governments. We also say that the removal of Eduardo Santa María, the director of the municipal police of Benito Juárez, is not enough; we demand the immediate dissolution of the repressive bodies.

We call on the women’s movement, the feminist, left, trade union, social, and popular organizations to join in solidarity with the struggle to demand justice for Alexis and all the victims of feminicide, and to set up a coalition against the repression that demands the immediate and unconditional release of all those arrested, as well as the trial and punishment of those responsible for the repression.

If they touch one of us, we will organize in thousands!