Last week, groups of workers from Walmart, Suburbia, Sam´s Club, Bodega Aurrera and FEMSA organized smaller work stoppages and pickets in Guerrero, Oaxaca, Michoacán and Mexico City. On Saturday, they called for a national strike.
Workers are fighting against poor labor conditions, low wages and the inability to form a union and advocate for better conditions.

Perhaps the most serious case of labor abuses is at the US multinational, Wal Mart. The company generated total revenues of 433 billion pesos in it’s Mexican stores, according to a 2016 financial report submitted to the Mexican Stock Exchange (BMV). In Mexico there is a law that guarantees that workers receive a portion of a company’s annual profits, but Walmart workers only received from 100-500 pesos– crumbs in comparison to Walmart’s revenue.

For the first time in Walmart’s history in Mexico, on Saturday, May 27 workers called for a national strike. Although these workers do not have a union, they are organizing at local stores in order to mobilize. 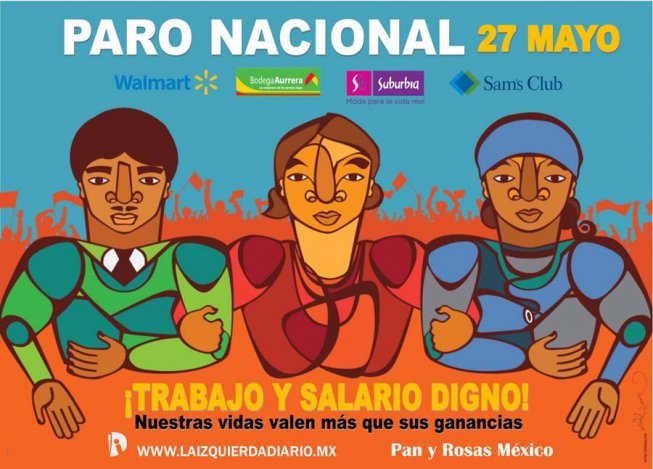 Workers demanded that the supermarkets respect the 8-hour workday, freedom to organize and join a union, decent salary increases and regularized schedules. As supermarket worker Elvira Ferreyra says, “Days off are on a rotation and they tell us which days we have off a week in advance. That makes it impossible to make plans ahead of time for anything.”

She adds that “We are the ones who open the doors to the stores in the morning, who clean the floor, who put products on the counter, who smile, who bear these conditions every day. We make the profits for the businessmen, so we aren’t satisfied with the pennies they give us.”

At some stores, workers were unable to effectively stop Walmart from working.

The struggle in Mexico is reminiscent of the Fight for 15 in the US, where Walmart workers make only 10 dollars an hour.

In Mexico and the United States, large transnational corporations increase their profits by fostering sexual, racial and ethnic divisions so that millions of workers and their families continue to live on miserable wages. Labor strikes in Mexico and protests in the United States are expressions of discontent against the policies promoted by transnational corporations. It is convenient to Walmart that US workers see Mexican workers as their enemy, blind to the fact that on both sides of the border, the same corporations profit off of super-exploitation. That is why the working class in Mexico and the US must unite against a common enemy.