Mexico: elections, class struggle and the construction of a socialist organization

Beginning with the position expressed by the parents of the 43 student teachers, of repudiating the June 7 elections, it has been much discussed what the appropriate tactic is so that the discontent expressed in the streets will burst into the electoral setting. Now we are attempting to go beyond the tactical debate to what is strategic. 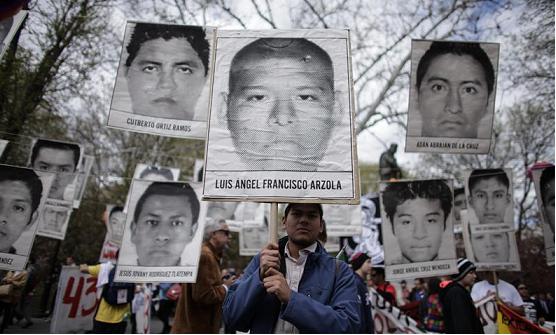 Once again, about the election tactic

One of the arguments that the advocates of the “tactical vote” for the candidates from the Morena employ is that, only by voting, will we achieve some type of insertion into the political system, that will permit “sneaking” the anger and popular dissatisfaction into the Chambers. We have already insisted that the strategic objective of these elections is to strengthen the regime of dominance in its entirely, questioned in multiple aspects by the subordinate classes.

From last year’s magnificent mobilizations that shook all the institutions and all the parties, now we are witnessing the persistence of the movement in solidarity with Ayotzinapa and a broad process of politicization.

Especially noteworthy are the statistics that warn that only 27% of the population would trust the elections. Conversing a little with this unbelief and with the appeal of the parents to repudiate the elections, the apologists for the “tactical vote” have suggested insistently that the most favorable scenario is that, on June 7, people vote for the Morena.

They suggest to us acting as in Greece where deep dissatisfaction and desperation, facing the austerity measures imposed by the Troika, became a turn to the left that put Syriza in power.

It remains to say that what those who are publicizing the “Greek Way” are not saying is that the government of Alexis Tsipras had to reach an agreement with the conservative nationalist party, “Independent Greeks,” and the Orthodox Church, by renouncing raising the rights of the Lesbian-Gay-Trans-Bisexual movement, on the one hand, and, on the other, dropping its economic program, faced with the Troika, that, as an analysis says, “Never went away, and its pressure is ever stronger.”

We have said in previous articles, arguing with John Ackerman that, in the final analysis, the defenders of this policy, with their conformist politics of the possible, want to convince us that, facing the fact that we, the exploited and oppressed, lack an organization that will represent us, we must limit ourselves to going to vote reluctantly.

As already for many years, the policy of immediate demands has surpassed any strategic and deep reflection on where the movement is going. It is about obstructing the Institutional Revolutionary Party (PRI) and the right wing, and historical experience does not matter at all: trusting the so-called “peaceful transition to democracy” and voting for one or another version (the PRD, Party of the Democratic Revolution or the National Action Party, PAN), has not “closed the way” to the PRI; rather, it has given the PRI survival, and it has granted the PRI a new democratic cover.

A party of the class struggle

In his article, “Green or Morena?” John Ackerman says, “Every day it is more clear that the main purpose of the supposedly liberal system of political competition is the creation of a fantasy of democratic normality and social stability, in order to conceal the accumulation of more power and money in the hands of the captains of global financial capital.”

In Marxist terms, this is the fact that the institutions of the regime are at the service of preserving the power of one class, the capitalist class, over others. This does not invalidate the fact that the election will be a setting in which the socialist left must participate, by trying at every moment to use the almost nonexistent opportunities that the bourgeois regime allows, so that the voice and program of the workers will be expressed.

But, in the case of Mexico, we lack an alternative with class independence, precisely because during the last three decades, and especially since the emergence of the PRD, the greater part of the left has renounced building a party of and for the workers, condemning the workers’ and people’s movement to subordinating itself politically to some of the variants of the regime.

Another section of the left, influenced by the leadership of the Zapatista National Liberation Army (EZLN), also renounced it, under the premise that it is harmful to fight for political power and that this terrain, that of politics, is not a space in dispute, but it is a monopoly of the ruling class.

Thus it is that what it is about is building an organization that will create a different politics: that of the exploited and oppressed. An organization that will understand elections as something tactical and will put its energies into being tempered in the heat of the class struggle; in the struggle of those for the appearance of the 43, of the workers of Mazda México, of the day laborers of San Quintín, of the nurses, of the workers of Honda México, of Caja de Ahorro, of the teachers, of the student teachers of the whole country. And that will persevere, because these struggles will not remain on the terrain of demands or what is “social,” and their protagonists will advance in learning lessons and being formed exactly as political individuals. Moving forward in the understanding precisely that bourgeois democracy is the democratic disguise of the dictatorship of capital.

The invalid ballot is not symbolic; it is militant

It is in this sense that we, who are suggesting casting an invalid ballot, are not doing so in a symbolic way.

It is a matter of deploying a militant campaign to organize in the schools, the work centers, the factories, the departments, among the young people and workers that no longer trust the traditional parties nor their recycled expressions and want to express their own dissatisfaction at the ballot boxes, but, at the same time, to go forge the foundations of a political force capable of antagonizing the interests of imperialism, its native partners and its managers.

The skeptics tell us that this is a utopia. They want to shut us away in the space of “what is possible.” But they refuse to see that it is impossible that the alternatives that try to humanize capitalism – that is, to humanize what cannot be humanized – will be viable for carrying out the postponed demands of the exploited and oppressed. Only a colossal social force, headed by an organization of these characteristics, can face colossal enemies. Today’s bread is tomorrow’s hunger.

A force of the socialist left that has won deputies in various provinces, and they are using their seats to denounce the turn to the right of the Kirchners in power, the repression of struggles of the workers, that are demanding that deputies should earn the same as a teacher, and they donate their wages to the social struggles.

And while they are using the electoral terrain as a tactical space, more for doing propaganda in favor of the dispossessed, in the case of the PTS, its militants are a lively part of the main workers’ struggles: there is the magnificent struggle of the workers of Lear, who twisted the arm of this transnational corporation. There is the case of the workers of Madygraf who seized the former Donnelley factory and put it into operation under the control of its workers.

In Mexico, from the MTS, we are placing our modest forces based on these objectives. While we go out to the streets, the public squares, the manufacturing areas, to report that we are missing 43 people, and that we must recreate an independent tactic in the elections, we are trying, every day, to get organized, in order to set up an alternative of the workers.