Mexico: May every congressman and representative earn the same as a teacher!

The Movimiento de Trabajadores Socialistas (MTS, Socialist Workers Movement) launched the campaign “May every congressman and representative earn the same as a teacher!” which is being actively promoted by La Izquierda Diario. 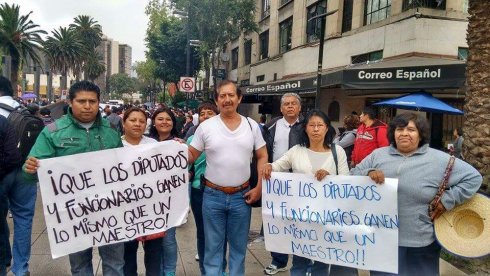 In response to the Mexican (PRI, PAN, and PRD) regime’s attack on educators in the form of punitive teacher evaluations, teacher’s held demonstrations throughout the country.

Teachers from Oaxaca, Chiapas, Guerrero, Michoacan, and Mexico City denounced that the wrongly named “educational reform” is an attempt to eradicate important labor conquests and fire thousands of educational workers.

Last week Emilio Chuayffet, who makes more than 160 thousand pesos per month, complained about Oaxacan teachers being paid while on strike in defense of public education in Mexico.

As Diana Valdez of La Izquierda Diario México (the Daily Left Mexico) pointed out, this campaign has been promoted by several political organizations all across Latin America. In Argentina the Partido de Trabajadores Socialistas (PTS) even proposed a bill that could make the project a reality.

Thousands in Chile and Brazil also believe that the privileges enjoyed by the political class must be eliminated and that we must fight for better working conditions for the majority. The La Izquierda Diario digital journals are actively pushing this project.
If you agree with the campaign, we are calling on you to share this idea with your classmates, your coworkers, your neighbors or wherever you can.