Far more than half of reported deaths due to the earthquake in Mexico City were women due to unsafe working conditions and the segregation of domestic labor. But women refuse to be victims and are on the front lines of the rescue effort.
Share on facebook
Share on twitter
Share on email

Only a week after an earthquake tore apart Oaxaca came another blow to Mexico, with its epicenter near Mexico City.

As the quake progressed, and in the minutes and hours afterwards, buildings all over the city buckled and fell, killing upwards of 330 people in Mexico City and surrounding towns and leaving hundreds of survivors in the rubble. At least 50 buildings collapsed, including a school that crushed over 30 children and several teachers.

With a magnitude of 7.1, the earthquake eerily occurred on the same day of the last major quake to pass through Mexico City, 32 years ago.

After the devastation in 1985, contractors made millions during the city’s reconstruction, using cheap products and pocketing the money allocated by the government. Many of the same buildings that fell 32 years ago fell once again in last week’s quake. Why were women disproportionately affected by the building collapses? Why were more women in the buildings most likely to fall?

The aftermath brought an outpouring of solidarity. People from throughout the entire city went on search-and-rescue missions, organized centers for food and water, and opened their homes to survivors. Defying machismo, women are playing a central role in the rescue efforts across the city.

Why are women disproportionately represented among the victims of the quake? The answer is simple: over half of the collapsed buildings were homes and apartment buildings and the quake hit at 1:15 pm on a workday. That means that the gendered division of labor meant the death of stay at home moms and domestic workers.

Mexican sociologist Patricia Solis says, “The combination of the time and the segregation of women based on gender roles can explain the differences in the number of people killed…”

Yet, there is an additional explanation for the disproportionate death of women: women who worked in rickety and unsafe factories.

The Collapsed Factory on Chimalpopoca and Bolívar Street

During the quake a four-story textile factory that produced toys and cameras collapsed with the workers inside. Most of the workers were women, many were migrants from Asia and Central America.

The conditions inside the factory were already unsafe. In fact, there was supposed to be an earthquake drill at 11 am that morning. The managers made sure the drill never happened. That afternoon, the building caved less than a minute into the quake.

To this day, the information about how many workers were in the factory, as well as how many were rescued remains hidden by the government and the companies. A worker who survived later said that over 100 people worked in the factory. In the rubble, dozens of bodies have been found and a few people have been pulled out alive. 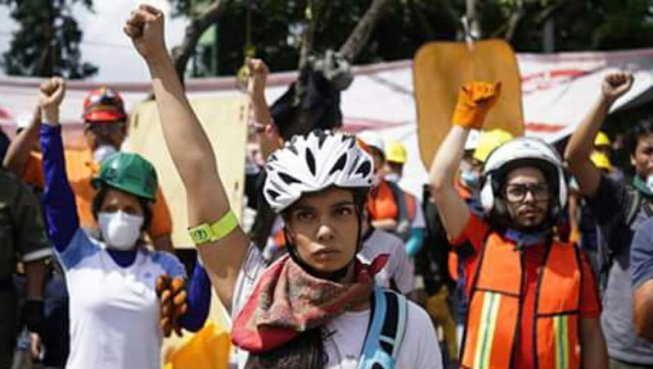 Over a hundred people went to the factory immediately. The military and the police arrived late and attempted to halt the rescue efforts. Women police officers, often perceived by the public to be more amicable, were dispatched throughout the city to stop relief brigades.

Maria Rosas from Mexico City says, “Our gender unites us, our class position divides us. I am on the side of the women in the rubble, not the cop who wants us to stop looking.”

This response by the government was replicated throughout the city; seeking to get on with business as usual and begin the long road to rebuilding. It’s in the interests of the bosses and the government to cut the rescue efforts short to rebuild key businesses as quickly as possible. However, the Mexican people insist that there are still survivors in the rubble and that the rescue effort isn’t over.

The main agents of cleanup and rescue have been regular Mexican people. They have formed human chains to pass rubble from one person to the next, clearing the way to search for survivors. Every once in awhile, a volunteer at the front of the line can be seen holding up a fist, signaling the rest to be quiet in hopes of hearing a trapped survivor.

Women have been a central part of rescue efforts. Maria Rosas writes, “Some people want to relegate women to domestic work–making and distributing food and helping organize shelter. But that’s not what most women are doing. We are on the frontlines, doing what is seen as men’s work.”

Pan y Rosas, a socialist women’s group in Mexico, is organizing women’s brigades to help with the rescue. In the past week, hundreds have participated. They are particularly organizing women to stop the police from bulldozing fallen buildings until they are certain of no survivors. A statement released by the group reads, “Our lives are worth more than their profits. The lives of the women workers at Chimalpopoca and Bolívar are worth more than their profits.”