The Mexican president has proposed a modified version of the Bracero Program implemented near the end of World War II. It would allow super-exploited Mexican migrant laborers to work in the United States without full rights. 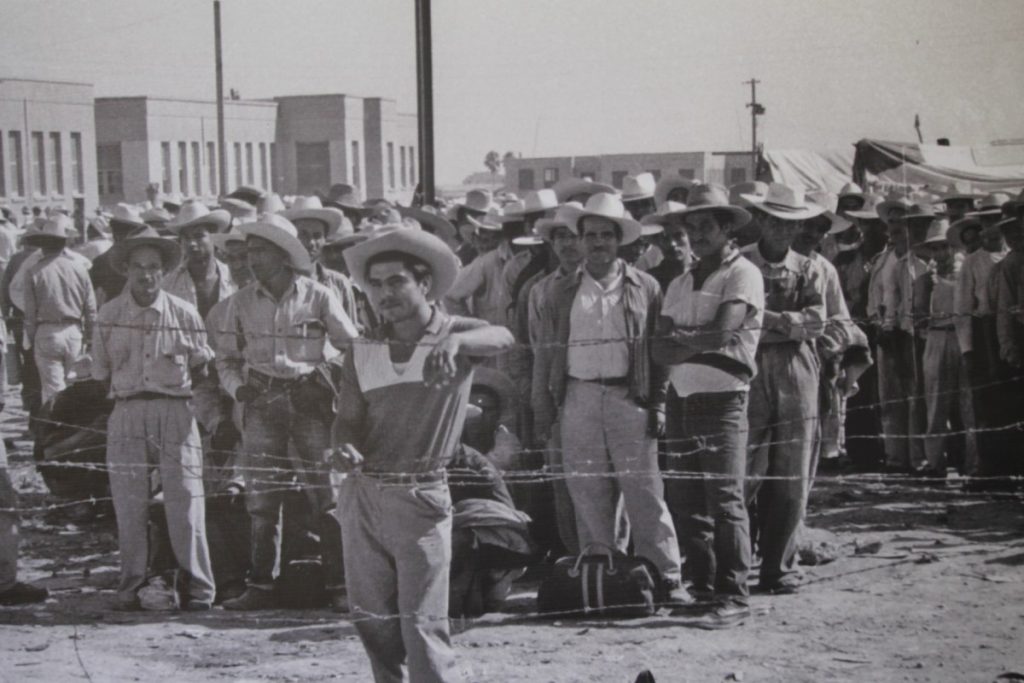 Mexican "braceros" or manual laborers waiting for work in the late 1950s. Mexico's proposed adaptation of the 1942 Bracero Program will ensure the hyper-exploitation of migrant workers on the U.S. border.

Mexican president Andrés Manuel López Obrador has proposed a legal regulation of migrant labor into the United States by suggesting an adaptation of the Bracero Program [bracero is a Spanish word for “manual laborer”], which was implemented near the end of World War II and lasted a little more than 20 years. The program, touted to help alleviate unemployment south of the border, primarily helped U.S. producers by allowing slave-like conditions for agricultural workers.

The questions must be posed: Is this model, already implemented decades ago — and subjected to in-depth analysis from which clear conclusions can be drawn — the one a dependent country such as Mexico actually needs? How will it be modified? It is not enough just to say that it would allow 800,000 people to work “legally” in the United States. What would be the conditions of that work?

The United States and Mexico agreed to the Bracero Program in 1942 as part of an immigration policy that pushed the idea that people dedicated to agriculture could work legally as guests in the neighboring country to the north. And so, some 5 million agricultural workers entered the U.S. Southwest with temporary work permits, helping build million-dollar agribusiness companies. But as soon as their contracts ended, hundreds of thousands of them — contemptuously referred to as “wetbacks” — were persecuted, criminalized, deported, and humiliated.

With the consent of the Democrats and the Mexican government at the time, they worked under brutal conditions that provided for what was essentially semi-slavery. Migrant workers were stripped naked and fumigated before beginning work. As more of them arrived from Mexico, their housing conditions worsened, and they were crammed into very precarious shacks.

Lacking any sort of collective bargaining agreements, they had no set work schedules. Instead, they could be called to work at any time of the day, had no seniority rights, and would be fired without cause at any time. They never had the luxury of taking breaks despite being bent over all day to harvest. Workdays routinely went from 6 am to 6 pm, and sometimes longer.

Their reality was quite different than the promises of improved living conditions. They suffered from super-exploitation of their labor and humiliating and dehumanizing treatment. They lived in overcrowded conditions, were fed spoiled food, and were watched over by private security guards. Parts of their wages were even withheld without their consent for the creation of a so-called “savings fund” that was never returned.

In 2003, former braceros organized to demand the reimbursement of the “campesino savings fund.” In 2005, Judge Paula María García Villegas Sánchez Cordero issued a historic ruling that obliged the Mexican state to compensate the agricultural workers; the government agreed to pay a tiny fraction of the tens of millions of dollars actually owed.

The Consequences and Continuity of Misery

The new relations of production in rural areas created by the Bracero Program gave rise to an agricultural proletariat that, as it grew tired of its enslavement, began to organize and strike. In 1947, for instance, some 1,000 braceros working for the DiGiorgio Corporation in California commenced a strike, demanding higher wages and the right to unionize.

In the years that followed, particularly in the 1980s, the migration continued. Many temporary migrant laborers came from the San Quintín Valley in Baja California, living in camps in the fields during the months the work lasted.

In 2015, there was a resurgence of this movement by migrant workers in San Quintín itself, with protests over intense work hours and miserable wages without benefits — in other words, a lack of labor rights. So far, there has been nothing done to address these demands. Many of the fields there are owned by sectors of Mexico’s ruling political caste.

It is also worth mentioning the new wave of strikes that emerged from the countryside in 1992, with the first efforts to liquidate the ejidos, the communal land holdings created after the Mexican Revolution. That began as part of a government agrarian counter-reform aimed at ending land distribution and opening these socially owned lands to the market. The visible consequence was the creation of corporations with 25 times more land than what had been held by small, individual landowners

Unity Needed On Both Sides of the Border

With the Mexican government subordinated to imperialism, having struck agreements with Trump to militarize the border — using the repressive forces of the state to prevent crossings by migrants — and now complying with the cruel immigration policies of the Biden administration, what guarantees can be expected for Mexicans through Bracero Program-type arrangements that trade the lives of agricultural workers for wealth and political power?

The union bureaucracies are in on these agreements to surrender thousands of day laborers to imperialism. To overturn the planned misery that threatens the working class and poor farmworkers who are forced to leave their homes, we need broad unity among diverse sectors. This will require proletarians and farmworkers on both sides of the border, women and students allied on the U.S. side of the Rio Grande, the multiethnic working class of the United States, together with the millions who make up the Latino and immigrant community who have mobilized against racism and violence — all of us fighting together for full rights and dignified living conditions.

First published in Spanish on March 4 in La Izquierda Diario.