A new migrant caravan made up of thousands of people left from Honduras in January to make the perilous journey north through Mexico. With Donald Trump pressuring him from across the border, President Andrés Manuel Lopéz Obrador of Mexico has gone further than ever to repress the caravan and send migrants back to Central America. 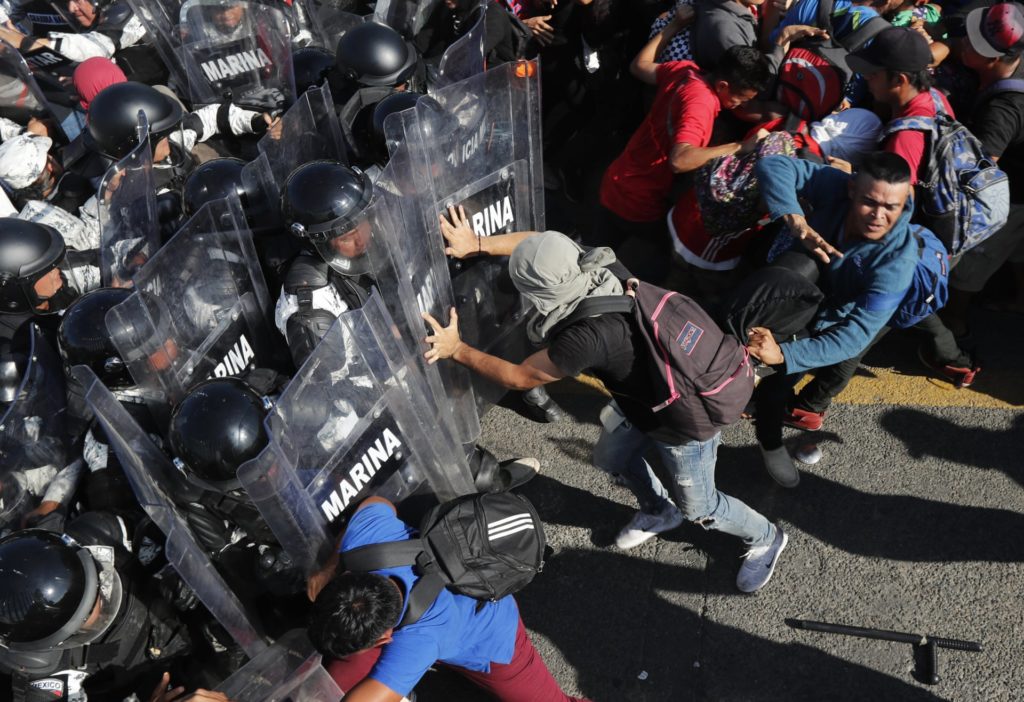 More than a year after the last migrant caravan left Central America, thousands of Central Americans gathered again in Honduras and started their journey to the United States on Jan 15. Back in late 2018, 4,000 migrants made a perilous journey from San Pedro Sula, Honduras’ second-largest city, to the U.S. border at Tijuana. Desperate to leave behind a life of extreme violence and poverty, thousands of Central Americans traveled north again for the prospect of a better life.

Although Mexico’s National Guard forced them back into Guatemala last week, the caravan finally successfully crossed the Suchiate river and entered Mexico on Thursday. Since then, however, the National Guard and the Mexican state have violently repressed them.

When questioned about this, Mexican President Andrés Manuel Lopéz Obrador (AMLO) said that the migrants’ human rights were respected. The National Immigration Institute (INM), a unit of the Mexican government, called the confrontation an isolated incident, but the aggression paints a different picture.

After crossing into Mexico, migrants and asylum seekers of the caravan were broken up in a coordinated attack by the National Guard. Complete with locked riot shields, batons and pepper spray, the National Guard pushed the group back, detaining over 800 of them, including unaccompanied minors, in a single operation. Over 1,000 migrants were deported last week to Guatemala on National Guard flights.

AMLO’s claims of good intentions are increasingly ringing false. After promising jobs to those who remain in Mexico upon declaring themselves at official border crossings, he reneged on the plan. Instead, officials deported those who were rounded up. The INM, meanwhile, reported that the National Guard had “rescued” 800 migrants, when, in reality they were aggressively arrested and detained.

For AMLO, the current operation represents a new standard in immigration enforcement and militarization of the country’s borders—one that differs starkly from the campaign promises he made in 2018 to respect migrants’ dignity and rights.

After two failed campaigns for the presidency in 2006 and 2012, AMLO finally took office in December 2018. In both 2006 and 2012, AMLO ran as the candidate for the center-left Party of the Democratic Revolution (PRD). Although widely popular, he lost by 0.6% to Felipe Calderón in 2006, the candidate of the conservative National Action Party (PAN), in an election that was known to be rigged. After the results were declared, widespread protests took place in which AMLO was portrayed as the “Legitimate Leader of Mexico”. Corruption also plagued the 2012 election, which was won by the centrist Institutional Revolutionary Party’s (PRI) candidate, Enrique Peña Nieto, amid reports of vote buying and coercion.

After the 2012 defeat, AMLO left the PRD to transform the National Regeneration Movement (MORENA) into a political party. Founded by AMLO in 2011, MORENA was, until then, operating as a non-profit deeply embedded in the socio-political movement in Mexico, protesting political corruption, electoral fraud, and the policies of the neoliberal political class. It drew support the masses, including the #YoSoy132 movement—a popular movement dubbed as the “Mexican Spring,” fighting for freedom of speech and against the return to power of the PRI.

After decades of right-wing gains, AMLO’s eventual win in 2018 was a culmination of a populist wave. The working class voted for him in massive numbers, hoping for change. As the founder and leader of MORENA, AMLO was seen as an organic part of the movement in the streets and represented the possibility of economic justice and human rights protections.

One of AMLO’s hallmark promises has been to herald Mexico’s so-called Fourth Transformation, with the first three being the independence from Spain (1810-1821), the Reforms period (1858-1861) and the Mexican Revolution (1910-1917). A little over a year later, the “transformation” has amounted to little more than a limited set of reforms in the domestic sphere and rhetoric touting the country’s independence from the United States.

The question of immigration, in particular, shows us the limits of AMLO’s program. Take, for example, his response to President Trump’s threat in 2019 to impose high tariffs on Mexican imports unless Mexico solved the United States’ immigration “problem.” AMLO’s government quickly created the Mexican National Guard, a 6,000-strong force created solely to prevent migrants from entering Mexico and crossing into the United States. This was a far cry from his promise to demilitarize the U.S. border.

In the months since its creation, the National Guard has acted as the United States’ immigration enforcer. With free rein to profile and detain people, it has implemented its program with an iron fist. By September 2019, Mexico deported almost 118,000 migrants, a 30% increase over the same period in 2018. Meanwhile, the United States saw a drop of over 75% in the number of migrants crossing the southern border from May to November.

AMLO’s subordination to Trump isn’t just limited to Mexico and the United States’ immigration policy. After Trump threatened to label Mexican drug cartels as terrorist organizations—paving the way for increased U.S. military presence in the region—senior members of AMLO’s government met with U.S. Attorney General William Barr to discuss Mexico’s plans to combat the drug trade. After decades of a drug war left hundreds of thousands dead, AMLO had previously committed to demilitarizing the country and taking a more compassionate strategy. The agreements achieved in the closed-door meeting. however, suggest that Mexicans will only see more U.S. interference masquerading as “help.”

During his 2016 campaign, Trump loudly proclaimed that, once president, he was going to create a wall along the U.S.-Mexico border—one that would be paid for by Mexico. AMLO later said that Mexico “won’t do the dirty work of any foreign government”. His current militarization of the country has proved him wrong. Today, Mexico is paying for it. In the absence of Trump’s physical wall between the United States and Mexico, the National Guard has become the metaphorical wall for those journeying north.

Although AMLO speaks of autonomy from U.S. imperialism, he’s shown himself incapable of escaping the shadow cast by the country’s northern neighbor. Out of fear of tariffs, the Mexican government deployed these forces in less than 45 days. In Mexico, U.S. imperialism has long festered through one-sided trade treaties supported by both Republican and Democratic governments, creating an economy that relies on U.S. capital. Deals like NAFTA and USMCA have transformed the Mexican economy as a market for cheap labor.

In the aftermath of the National Guard’s creation, Mexican officials declared that the deal to deploy the Guard was a victory for Mexico because it stopped the tariffs. As the events of last week have shown, the deal was a victory for none except U.S. imperialism, which has successfully strong-armed Mexico into serving as the southern arm of its Border Patrol.

The Need for Anti-Imperialism

AMLO’s subservience to U.S. interests shows the limits of progressive politicians who work within capitalism. Anti-imperialism doesn’t stop at delivering inspiring speeches on the campaign floor. It demands that we fight U.S. imperialism and hold out against the likes of Trump. It definitely doesn’t require the creation of new paramilitary forces at the service of an imperial state.

In the United States, anti-immigration proposals have long been championed by politicians on both sides of the aisle. While detentions and deportations under Trump have taken on a particularly heinous character, Obama before him deported more people than any other president before him. Current presidential candidate Bernie Sanders, furthermore, thinks open borders are a Koch brothers proposal. More recently, the Supreme Court upheld a ruling allowing the Trump administration to start enforcing an immigrant wealth test that is designed to screen out green card applicants at risk of becoming “public charges.”

Capital, however, has no borders. Capitalists exploit cheap labor everywhere, including in Central and South America. By treating migrants as second-class citizens, they dehumanize them and, consequently, deny their labor rights, which drives down the wages of all workers, including those in the United States. Under capitalism, the entire political order is designed to sustain this with its diplomatic tools and treaties. The true enemies of the working class aren’t those who are trying to escape the devastating effects of US imperialism and exploitation in their countries—they are the capitalist class and their political regimes.

Crises like this past week’s clearly show us the balance of forces. They deepen the need for independent working-class organizations and for the working classes on both sides of the border to pursue an anti-imperialist program. Such a program must fight for open borders and full rights and citizenship for all migrants, wherever they’re from.