Today is the anniversary of the killing of Michael Brown by a white police officer in Ferguson, Missouri. What happened in 2014 resonates today in the Black Lives Matter movement and the struggle to abolish the cops. 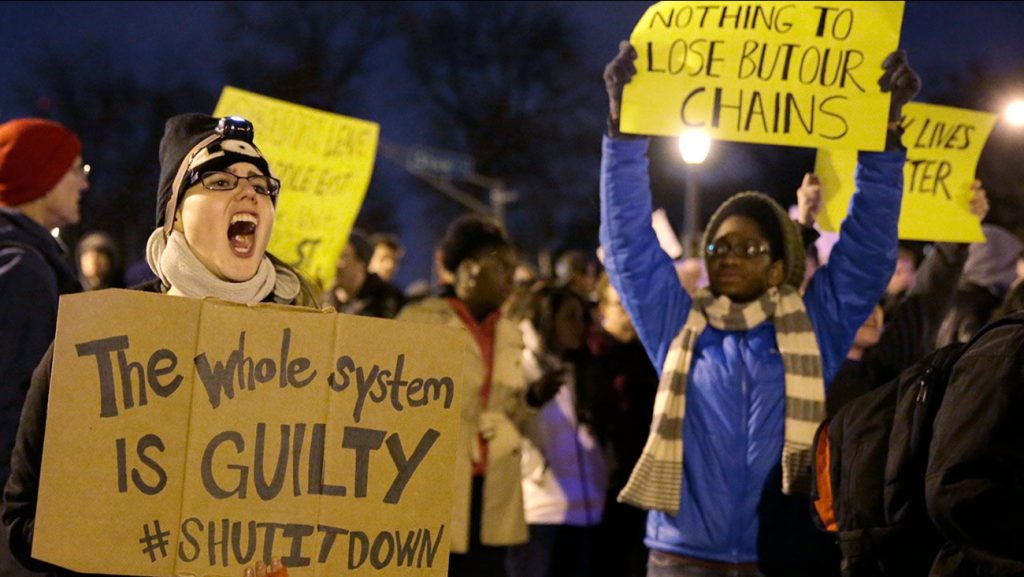 Seven years ago today, Michael Brown was shot and killed in Ferguson, Missouri — a suburb of St. Louis — by a white cop, Darren Wilson. The killer claimed Brown attacked him in his police car and tried to take his gun, which went off. An eyewitness to the event told the true story: there was a struggle through the car window after Wilson grabbed Brown by the neck and threatened to shoot him — which Wilson did. Brown fled, and Wilson pursued him and shot at his back. When Brown turned around with his hands up, the killer cop pumped him full of bullets. All in all, six were found in Michael Brown’s body.

Ferguson erupted in protests for more than a week, with escalating violence.

It is from Ferguson that the slogan “Hands up, don’t shoot,” entered the world’s lexicon. Ferguson is also a touchstone in the evolution of one of the most important social movements in U.S. history. A social media post went viral after the July 2013 acquittal of George Zimmerman in the killing of Trayvon Martin in Florida the year before: “Black people. I love you. I love us. Our lives matter. Black Lives Matter.”

Those words helped spur a wider reaction to the killing of Michael Brown and then to other police killings of Black people across the country. The events in Ferguson accelerated the formation of Black Lives Matter as an organized movement. Ever since, when people have come together to demand an end to the murderous spree cops have been on in this country ever since the formation of police departments, the spirit of Ferguson is in the air.

Backdrop and Timeline of Events in Ferguson

At the time of Michael Brown’s killing, Ferguson had been undergoing more than a decade of significant demographic change. The local police department — 53 cops in all — was overwhelmingly white and, as the Washington Post reported, bore “little demographic resemblance” to the community, which was two-thirds Black. A report by the state attorney general concluded that Ferguson police were “twice as likely to arrest African Americans during traffic stops as they were whites,” and there was tremendous distrust in the Black community of the local cops.

The killing of Michael Brown was, as the New York Times wrote, “the last straw in a long train of abuses that [Black people in Ferguson] have suffered daily at the hands of the local police.” And as a sign of just how much hatred and disrespect the cops had for Ferguson’s Black residents, Brown’s bloodied body was left lying in the middle of the street for some four hours after he was killed.

On August 15, when Wilson was finally officially identified, the Ferguson cops also released a video that claimed to show Brown in a market stealing cigarillos from behind a counter. The cops and media began to push the narrative that Brown was a criminal, implying that he got what he deserved. The next day, Missouri’s governor declared a state of emergency, imposed a curfew in Ferguson, and a couple of days later sent in the National Guard.

Cynical Efforts at “Healing” and Prosecution

As the backlash grew against painting Michael Brown as the protagonist, and more investigative journalists uncovered just how bad things were with the Ferguson Police Department, Tom Jackson — the white chief of police — released a videotaped apology to Brown’s family on September 25. It focused on leaving his body in the street. He also showed up to march with protesters in a “solidarity” gesture. It was a colossal failure: cops pushed and shoved demonstrators to make way for Jackson, and arrested a protester just as Jackson joined the group.

Two months later, word came down that a grand jury convened by St. Louis County prosecutor Bob McCulloch had decided not to indict Wilson. In his testimony to that grand jury, Darrin Wilson described Michael Brown — a large young man who people in the community routinely referred to as a “gentle giant” — as some sort of “soulless behemoth” (the New York Times’ words) who was “almost bulking up to run through the shots, like it was making him mad that I’m shooting at him” (Wilson’s words).

A week earlier, the governor had anticipated the grand jury outcome and declared a new state of emergency, activating the National Guard again ahead of the decision. Why no surprise? As the New York Times editorialized the next day, McCulloch was “widely viewed in the minority community as being in the pockets of the police” and “made matters infinitely worse by handling this sensitive investigation in the worst possible way.”

The Times specifically mentioned his refusal to step aside in favor of a special prosecutor, his refusal to recommend an indictment and instead leave the grand jury to do its own investigative wading through “masses of evidence,” and carrying on a secret trial out of public view by having the process take three months rather than the typical few days. His announcement of the grand jury results “sounded more like a defense of Officer Wilson than a neutral summary of the facts that had led the grand jury to its conclusion.”

McCulloch’s announcement spurred new unrest, with buildings and police cars burned, cops pelted with rocks, and even reports of gunfire that caused some St. Louis-bound flights to be diverted to other cities.

By this time, as the Washington Post wrote then, Ferguson was “a symbol, not a place.”

In 1965, brutal attacks on voting-rights marchers trying to cross the Edmund Pettus Bridge in Selma, Alabama, were seen on television across the country, spurred other protests, and solidified the civil rights movement as a national one. In 1970, campuses from coast to coast erupted after the killings of four students at Kent State University in Ohio during an anti-war protest. The murder of George Floyd by Minneapolis cop Derek Chauvin sparked the largest protest movement in U.S. history and brought people into the streets throughout the world. The killing of Michael Brown has a similar legacy.

There are the “Ferguson effects” in the realm of bourgeois institutions, and there is what Michael Brown’s killing has meant to the struggle against police brutality against people of color and the post-Minneapolis movement to abolish the police altogether.

In the realm of the former, the U.S. Department of Justice investigated the killing and then announced in early March 2015 that it would not prosecute Wilson in federal court. But it did release a scathing report about racial bias in the way cops and the courts in Ferguson treated Black people. That led Jackson, the police chief, to resign — eventually replaced by a Black cop. It was a meaningless symbolic gesture, since as we know: All Cops are Bastards.

The next month, Ferguson’s municipal elections brought new Black members to the City Council. Of course, these bourgeois politicians did nothing to abolish Ferguson’s racist police department. But the city did hire a new municipal judge and interim city manager, both Black.

The Ferguson effect also led Missouri to enact new legislation limiting the abilities of cities and towns to profit from traffic tickets and court fines, which had been a huge point of contention between Ferguson’s Black community and the cops. And early in 2016, Ferguson and the DOJ struck a deal to “reform” the city’s policing and municipal court.

For those of us in the antiracist struggle, the killing of Michael Brown has a different legacy. More so than the shooting of Trayvon Martin, it helped galvanize that structural racism is at the heart of what we fight against. Everything leading up to the shooting of Michael Brown, and the subsequent effort to smear his memory, pointed to the bourgeois state and how it employs its “special bodies of armed men” (to use Lenin’s term), the courts, and other institutions of its rule to perpetuate the oppression and repression of the working class, particularly people of color and Black people in particular.

The cop violence that took Michael Brown’s life flows from the same monstrous system of exploitation — capitalism — that took the lives of Sandra Bland Ahmed Arbery, Breonna Taylor, Sean Read, Eric Garner, Elijah McClain, George Floyd, and so many others. Murder and violence are a routine component of capitalist rule. In the name of all these victims, our responsibility is not simply to commemorate the anniversaries of their deaths, but also to fight unrelentingly for killer cops to be jailed, for the abolition of the cops, and for a world in which the oppression and exploitation of a system based on profit before human lives is a thing only read about in history books.