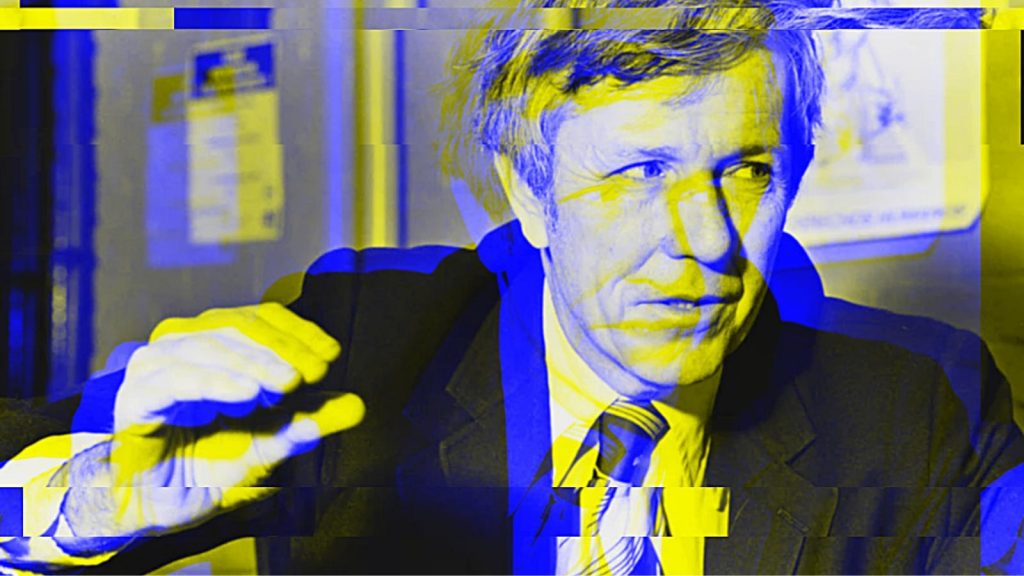 Interview with Doug Greene, author of a new biography of Michael Harrington.

For readers unfamiliar with the name, who was Michael Harrington?

Michael Harrington was the most important American democratic socialist of the latter half of the 20th century. He was the author of 14 books on politics, history, and socialism. His most famous book was The Other America (published in 1962), which was an exposé of poverty in the United States. The Other America influenced the Great Society and War on Poverty programs of the 1960s. So Harrington’s impact extended very much into the mainstream of U.S. politics.

Lastly, Harrington was not only a political activist but also a democratic socialist theorist. His theory of “democratic Marxism” was meant to supply a philosophy and strategy for the U.S. Left and the labor bureaucracy. The key to this was the idea of “realignment,” which, to put it simply, was meant to transform the Democratic Party into a social democratic party, one that would in turn create a welfare state and, finally, socialism. In reality realignment was a nonstarter. It has been nothing but a rationalization for reformism, opportunism, and apologetics for imperialism. In other words, the key word in “democratic Marxism” is “democratic,” since Harrington’s ideas lead to the death of revolutionary politics and subordination to the Democrats.

How did Harrington respond to the most important political questions of his day?

For the radical generation that came of age in the 1960s, Vietnam was a touchstone issue. Harrington was detested by radicals in the antiwar movement. Now, he sometimes gets accused of supporting the Vietnam War. If we look through his writings, however, we’ll find all sorts of statements opposing the war. What I think is key here is not whether Harrington supported the Vietnam War, but how he went about opposing the war.

As we know, Harrington focused his energies on the Democratic Party. That meant he saw liberals such as President Johnson as potential allies, and he was willing to play on their terms. For Harrington, an antiwar movement could not welcome communists, break the law, or advance any revolutionary politics. He refused to see the Democrats as complicit in the war. In other words, Harrington refused to consider any concrete action that could actually end the war. The antiwar movement had to stay respectable and within proper limits, lest it embarrass potential liberal allies. Only after 1968, when large swaths of the public and the establishment saw the war as unwinnable – and a Republican was in the White House – did Harrington come out against it.

When it came to Israel, Harrington supported Zionism going back to the 1940s. Harrington’s various democratic socialist groups, including DSA, have also supported Israel. Now, Harrington leaned toward a “socialist” Zionism represented by the Israeli Labour Party and Yitzhak Rabin. Harrington’s position on Israel was part and parcel of his democratic socialist politics, which generally aligned with NATO and “democratic” capitalists, and opposed to the forces of “totalitarian” communism.

Harrington was fervently opposed to the Palestinian Liberation Organization and Yasser Arafat, believing them to be anti-Semitic. With a few exceptions, Harrington opposed Third World national liberation movements, seeing them as potentially totalitarian and Stalinist. Ironically, he admitted that democratic socialism had little chance of becoming a viable option in the Third World.

Harrington’s project to establish social democracy in the U.S. was a failure, so he was little known beyond small circles of leftists. I think it’s safe to say that 10 or even five years ago, you would not have written a whole book about him. I certainly would not have read such a book. So why is Harrington becoming relevant again?

You’re right, I never would have written about Harrington just a few years ago. Both him and DSA were largely irrelevant to the U.S. Left. Since 2016, with Sanders’s first campaign and the election of Donald Trump, DSA has grown to nearly 100,000 members, becoming the largest nominally socialist organization in the United States since the height of the Communist Party in the 1940s and Students for a Democratic Society in the 1960s. For better or worse, DSA shapes a great deal of debate on the U.S. Left regarding politics, strategy, and socialism. And in that mix, Harrington’s legacy casts a very long shadow. So it is very important to discuss who Harrington was as well as his ideas and their damaging legacy.

How do you see Harrington’s ideas specifically informing the strategies of Jacobin magazine and the majority leadership of the DSA?

The founder of Jacobin, Bhaskar Sunkara, has acknowledged Harrington as a major influence on the journal’s politics. At times, Jacobin has welcomed more revolutionary voices, but their dominant politics are very much social democratic: advocating working inside the Democratic Party, championing Bernie Sanders, etc.

Most DSA members likely don’t know who Harrington is and probably haven’t read a line by him. There may be isolated exceptions, but his ideas of reformism and working inside the Democratic Party remain very much the common sense of DSA. The strategies today referred to as “party surrogate” or “dirty break” are just updated versions of Harrington’s realignment strategy. Basically, this strategy argues for building DSA as a party within the Democrats: its members will be elected inside the Democratic Party, and they will eventually gain enough strength to split off and form a new socialist party.

In practice, the party surrogate/dirty break strategy is nebulous. DSA members who are elected as Democrats, such as Alexandria Ocasio-Cortez, don’t seem to be in on it — they just consider themselves Democrats and act as such. Furthermore, many of the advocates of the dirty break, such as Eric Blanc, ended up campaigning not only for Bernie Sanders but also for Joe Biden. Like realignment, the dirty break was an excuse for kowtowing to the Democrats and surrendering socialist politics. In reality, the dirty break has ended up with all dirt and no break.

In Harrington’s time, what were revolutionaries’ most effective arguments against his reformist ideas?

I think the best were provided by members of the then Trotskyist Socialist Workers Party in the 1970s, particularly George Novack and Peter Camejo. Novack did an excellent job showcasing how Harrington took the revolutionary heart out of Marxism in terms of philosophy, economics, and politics.

Novack showed that such revisionism would ultimately lead to forgetting the class nature of the Democrats:

Imagine Marx’s indignation at the spectacle of a so-called Socialist Party divided over which capitalist ticket to support in the most vicious capitalist country in the world! What a theme for satire!… The Democrats and Republicans represent capitalist ideology. That’s correct but it’s rather superficial. These parties are the major defenders of the interests of the big-businessmen, bankers, racists, and sexists who rule the United States. That’s what’s wrong with them. That’s what every socialist recognizes as the beginning of wisdom, as the beginning of action, as the beginning of organization. If you don’t understand this elementary fact of political life you can go astray very, very easily. If you’re hooked in by the argument of the lesser evil, which turns out to be the greater evil once these capitalist politicians are in office, you’ll not only go from bad to worse.

As for Camejo, I think he put it best when he told Harrington that you will never get to socialism by supporting a capitalist party:

I think Mr. Harrington, who’s a Democrat, who votes Democrat, supports the Democratic party, should call himself what he is: a Democrat.

There are many other arguments that both Novack and Camejo make against Harrington, but I think these are the most important.

Are there any points where Sunkara and other students of Harrington have serious differences with the old versions of “democratic socialism” and realignment?

In terms of Sunkara and Jacobin, I think there is a difference in that they sometimes look nostalgically at the socialist and communist past. You can see this when they run articles commemorating the Russian Revolution and Lenin. That’s something Harrington really wouldn’t do. I should add, however, that Jacobin doesn’t let that nostalgia translate into any advocacy for revolution today. Rather, you can find plenty of articles in Jacobin advocating popular frontism, reformism, and work inside the Democratic Party. Maybe in the fine print, there’s talk about independent politics, but not in the here and now. In that sense, Jacobin really isn’t too far from Harrington.

Harrington was also revived in the debate about Kautsky. This was not really about Kautsky per se, but rather about whether socialists should support the Democrats. Considering the DSA’s historical anticommunism, a theoretical authority for supporting the Democrats cannot come from Stalin, Togliatti, Browder, or Dimitrov. Kautsky does provide such a Marxist authority for the new reformism, since he is untainted by communism. By 1914, if not earlier, Kautsky had broken with any semblance of revolutionary politics and come around to a reformist position.

Kautsky’s advocates in DSA use him as a stand-in to advocate a “democratic road to socialism,” which in practice means supporting Biden. Harrington’s actual politics are little different from what’s being promoted by the Kautsky champions now. Maybe the name of Michael Harrington has too much baggage or is just too obscure to make the case for the new reformism.

Do you think the Democratic Party of today is different from what it was in Harrington’s time?

My short answer is no. The Democrats were a capitalist party in Harrington’s time, and they still are today. They still defend the interests of the bourgeoisie, implement racist policies, and conduct wars. That hasn’t changed. What does make the Democrats slightly different from the Republicans is that they use their facade as the “party of the people” to gain popular legitimacy for carrying out imperialist policies. Both in Harrington’s time and today, the Democrats are quite successful in co-opting and deradicalizing any potential opposition that may develop, whether that be Jesse Jackson or Bernie Sanders. Harrington’s strategy of realignment will lead to the same end of transforming socialists into loyal foot soldiers of the Democratic Party. Working among the Democrats does not and will not work to advance the politics of socialism.

Harrington is still probably best remembered for The Other America. Now that you have studied so much of his work, is there anything you would genuinely recommend for young socialists to study?

A short answer is that Harrington’s work has been immensely damaging for socialism. While Harrington was a very good writer and popularizer, I don’t think there’s much value in the politics he popularized. In terms of Marxism, socialism, revolution, and reform, not to mention his positions on the Soviet Union, Vietnam, and Zionism, Harrington got practically everything wrong. So I think he can serve only as a negative example for socialists and communists today.

That being said, I think we should read and learn from those we disagree with. In terms of Harrington’s work, I think The Other America is actually worth reading since it is his most famous work. By reading it, you can see how he framed his understanding of poverty and how to combat it in a liberal way. I’d also recommend his 1970 work Socialism, which really does an excellent job explaining his revisionist understanding of Marx, Third World struggles, and the reformist road to socialism. His last book, Socialism: Past and Future, goes over much the same ground, but I think it’s more fleshed out earlier.

For criticism of Harrington, I’d recommend the aforementioned Novack and Camejo. I hope my book also provides a dissection and refutation of Harrington and his worldview. And call me old-fashioned, but I’d also suggest a reading of Lenin’s What Is to Be Done, State and Revolution, and Rosa Luxemburg’s Reform and Revolution to provide ammunition against the reformism Harrington represents.

Ultimately, communists need to understand Harrington’s politics so we can refute it both theoretically and practically.