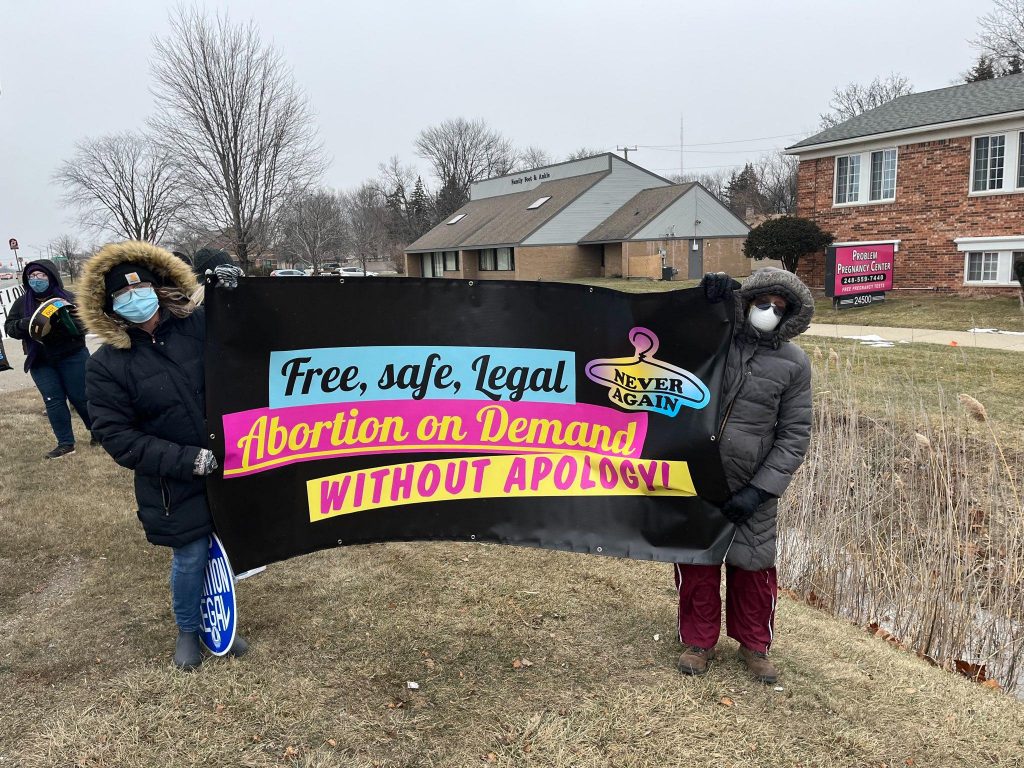 On the 49th anniversary of the U.S. Supreme Court’s decision in Roe v. Wade in 1973 that legalized abortion across the country, the Reproductive Rights Group of Michigan organized a picket outside the “Problem Pregnancy Center” in Southfield, Michigan on Saturday, January 22. The center is one of about 3,000 fake abortion clinics in the United States. These fake clinics outnumber, by far, clinics that offer actual abortion services, of which there are about 800.

These fake abortion clinics get people in the door by offering free pregnancy tests and free ultrasounds, and by promising information on abortion. The Problem Pregnancy Center even imitates the pink colors of Planned Parenthood. Mostly backed by religious organizations, some even receive federal funding — while funds are withheld from actual abortion providers.

The real motive behind these centers is to shame and scare pregnant people from considering abortion.

One of our activists/investigators called several of these fake abortion clinics in the Metro Detroit area and was told things such as “Your baby already has a soul” and “women regret having abortions every time,” whereas “women who give birth never regret it.” Among the lies spewed on the phone were, “Abortions lead to alcohol and drug additions.” Further, “Women are natural nurturers” and, assuming the caller was pregnant, “You are already a mother but you have to choose whether you’re a mother to a dead baby or not.”

A number of participants explained why they had attended the protest. Myrtle from the Coalition of Labor Union Women (CLUW) said, “I had a friend when I was in high school. She had what I call a ‘table top’ abortion. I made my sign in honor of Bonnie — because she was only 15 years old when when she had that abortion, and she died.”

Millie Hall, president of Metro-Detroit CLUW, was also there. “All of our rights, especially our reproductive rights, are under attack,” she said. “We can not lose what we gained 49 years ago in Roe v. Wade. Women have a right to control their bodies.”

David Finkel, a member of Solidarity, said, “This is crucial. It’s part of a package. It’s the same struggle as voting rights, racial justice, anything you can name. The attack is on everything at once.” He added that he hoped continued activism could “discredit the legitimacy of the Supreme Court.”

Judith Wraight from Detroit explained that she had an abortion before the Roe v. Wade ruling. “There is no way I could have birthed a child … And I don’t regret anything at all.” She pointed to the dangers of childbirth as one reason that she believes people must have the right to terminate their pregnancies.

Three days prior to the in-person protest, the Reproductive Rights Group of Michigan organized a “Yelp zap” against the Problem Pregnancy Center. Activists left Yelp reviews and one-star ratings to warn people who might otherwise unwittingly walk into a pro-life trap.

Michigan abortion rights activists plan to continue organizing in the lead-up to the Supreme Court’s decision this summer in the Dobbs vs. Jackson Women’s Health case from Mississippi, which is likely to end the federally protected right to abortion. They are dedicated to building a movement in the streets to defend abortion and reproductive rights.

To get involved in the fight to defend abortion rights in Michigan, contact the Reproductive Rights Group of Michigan on Facebook or scan this code to sign up for future actions: