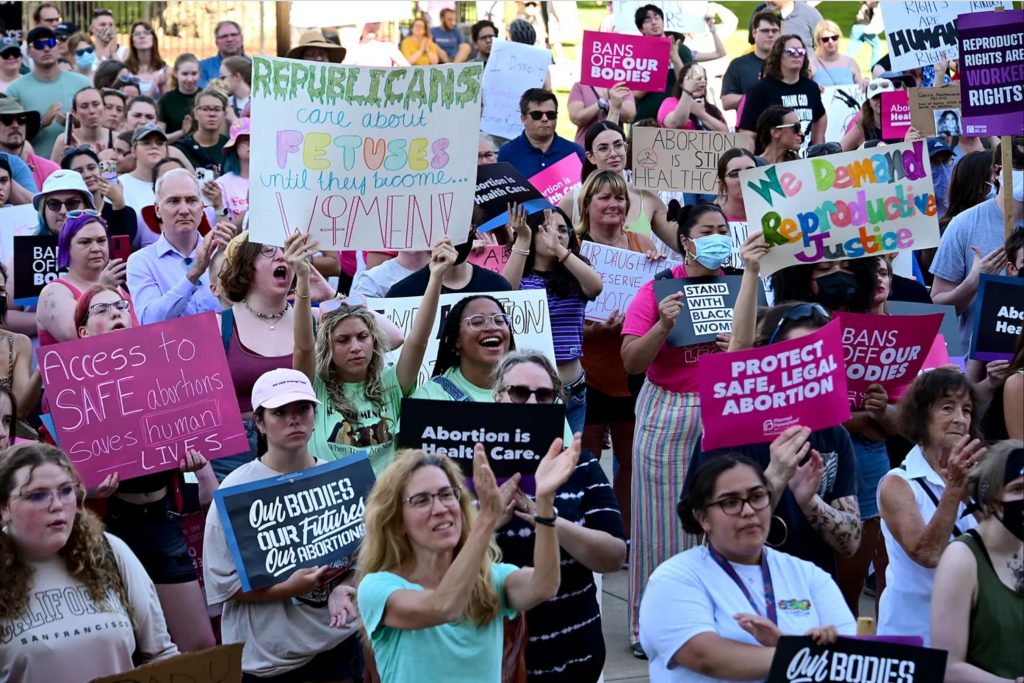 A June 24 protest at the steps of the Michigan Capitol building in Lansing to protest the overturning of Roe v. Wade (Photo: Dale G. Young)

The Michigan Court of Appeals ruled today that the injunction from May of this year, which prohibited the enforcement of a 1931 abortion ban, does not apply to county prosecutors.  Today’s ruling effectively allows county prosecutors to enforce the abortion ban and bring felony charges against anyone performing or receiving an abortion. The 1931 law does not even allow anyone pregant as a result of incest or rape to receive an abortion.

This ruling effectively means abortion is prohibited in MI, though several county prosecutors, all of them Democrats, have pledged to not enforce the ban. This includes Wayne County, where Detroit is located, and several other larger counties like Oakland and Washtenaw.  The organization that brought the appeal against the injunction — the Great Lakes Justice Center — represented several Michigan prosecutors seeking to enforce the ban.

Planned Parenthood of Michigan released a statement today saying that their “doors will remain open” and they “will continue to provide abortion services in accordance with the law.”  The statement quoted a Michigan court rule that provides 21 days for laws to be appealed before going into effect.  However, reproductive rights activists confirmed that at least two abortion clinics located in Macomb County have closed their doors as a result of the ruling.

Macomb County has a Trump-supporting prosecutor named Peter Lucido, who has made a name for himself through the prosecution of BLM protesters and a slew of sexual harassment complaints against him.  Lucido has previously pledged to enforce every law on the books, even against adultery.  According to the Detroit Free Press county prosecutors in Kent and Jackson County “would review possible criminal charges brought by local law enforcement,” which is another example of the reactionary nature of the police as enforcers of capitalist inequality and exploitation.

While the future of legal abortion is uncertain in Michigan, we cannot  rely on the courts — especially local and state courts — to secure abortion rights.  In fact, Michigan is not the only place where state courts have effectively banned abortion.  In Texas, the State Supreme Court blocked an injunction that would allow abortion to continue in certain cases, which has caused abortion clinics throughout the state to shut down.

This means that the struggle for reproductive rights has to be a national one, and it cannot focus exclusively on obtaining legal status for abortions through state ballot measures and legislatures, especially since such measures are not immune to state and federal court intervention.  In building a national struggle, the movement needs to fight for a federal law guaranteeing full rights to abortion, similar to the movement in Argentina, which, in 2020, successfully won the right to abortion on demand within the first 14 weeks. Like Argentina, we must use working-class methods of struggle, like mass mobilizations in the streets and in our workplaces, if we have any hope of winning our call for free, safe, legal abortion on demand and without apology.

Given the Democrats failure to pass a federal law guaranteeing reproductive rights, the movement cannot rely on the Democrats to seriously fight against the ban in Michigan.  The movement in Michigan and across the country must maintain political independence from the Democrats in order to effectively resist their co-optive methods, which they use to deflect the righteous anger of the movement into electoral campaigns backing Democratic Party candidates. Effective resistance to the Republicans means building independent organizations like Bread and Roses, and relying on the collective power of the working-class and specially oppressed.