Microcephaly, dengue and the collapse of public health in Brazil

Working families and poor people are the victims of diseases that need not exist. Thousands of cases of microcephaly and chikungunya, along with hundreds of thousands of cases of dengue, resulting in record deaths, are three diseases seemingly brought about by the same mosquito and spread mainly in poor communities because of successive governments’ abandonment of public health. They govern for the rich, and the poor suffer the consequences. 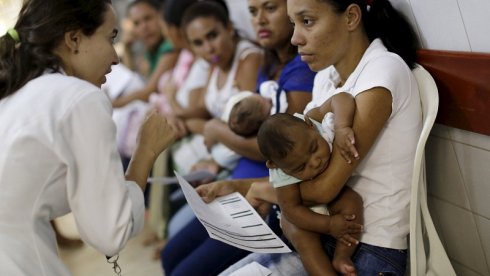 President Dilma’s government claims that “it is losing the battle against the mosquito,” but the war was never even fought. If the caste of politicians who govern for the capitalists were worried at the first sign of disease and mosquito plague, the government would have done massive prevention, distributing natural repellents, screens, and mosquito nets to every poor community. It would have produced large-scale diagnostic tests, along with a national plan to ensure basic sanitation in each region where diseases like these appear.

Half of Brazil does not have sewage and sanitation systems, or even decent housing. SUS, the government health system, has been destroyed and scrapped, leaving public healthcare workers with precarious conditions, layoffs, and stagnant wages. In facing the mosquito, facing the microcephaly epidemic, the government loses on all fronts.

If the government was concerned about the mother who has her pregnancy compromised by microcephaly, why get stuck debating the right to abortion? Why spend millions of dollars on the Olympics, when there is not a single center to treat children with microcephaly, giving affected families free, quality, public assistance?

Microcephaly is a serious condition that includes permanent neurological damage to the child and also a permanent burden on families already living in dire need. The future of a whole generation is robbed; this disease is not like high blood pressure or arthritis, which can be remedied. The damages are forever; this is the barbarism of capitalism.

Various governments of the capitalist parties have opened the door to the mosquito, through excluding massive sections of the population from housing, from basic sanitation, and from any urban planning whatsoever, not to mention the chronic nutritional deficiencies (the constant lack of eggs, meat, and other nutritious food, weakening the immunity of working families) and pollution experienced in many communities.

To make matters worse, these governments attack employment without end, chipping away at rights won (such as workers’ compensation, etc.) and continuing to deprive poor communities of water (the water crisis continues), garbage collection, and basic sewage treatment and sanitation. The best urban and rural land is in the hands of the rich; it is capitalist real estate speculation that pushes the lower classes to high risk areas, whether from mudslides, pests, or diseases.

There is a debate around large questionable deals that capitalist chemical companies made with the Ministry of Health to poison the waters of poor communities on the pretext of combating the mosquito causing microcephaly. Notice other poisons and even experimental vaccines that the government disastrously threw to the poor regions where microcephaly exploded and continues to grow. It is important to open a debate independent of the government on these issues, from the left, understanding that Monsanto and capitalist industry – under UN/WHO cover – are capable of anything in the drive for profit. Just see who let the mosquitoes return after spending money on the vaccines from multinational companies, resources not spent to stop the mosquito and beat microcephaly.

In short: the government does not want and cannot solve the problem, with its hands tied to the bankers, public debt and large business deals. But why no freedom of choice for the pregnant woman who wants to take care against the mosquito, or protect against microcephaly? And the neighborhoods where they live in the middle of standing water, mosquitos, water rationing (that requires having a water tank or some other type of water storage in the yard). Why not give the empty buildings and vacant housing to those in need? Why not hire unemployed youth to public work programs to provide immediate sanitation in poor neighborhoods? And what about women’s basic right to abortion, to choose whether or not to have a child with microcephaly? And the woman who chooses to have the child with microcephaly, where are the centers with professionals for all the care children with microcephaly need? And why did the government not produce natural repellent on a large scale and distribute en masse screens and mosquito nets, since dengue is growing again and the mosquito spreading it?

Lack of resources? A lie! There was no lack of money for the World Cup, and the government continues to spend millions on the invasion of Haiti. And SUS, the achievement of social struggle, left instead with endless lines, no beds, no ICU, and healthcare in the process of being privatized. We will never beat these diseases without re-nationalizing SUS under workers’ control. And this will require an offensive strategy from the left, militant unions and student organizations raising those demands in struggle.