Migrants Held in Limbo in Bosnia, Violence at the Gates of Europe

With the former “Balkan route” closed, more and more refugees are trying to make their way into the EU via Albania, Montenegro and Bosnia. 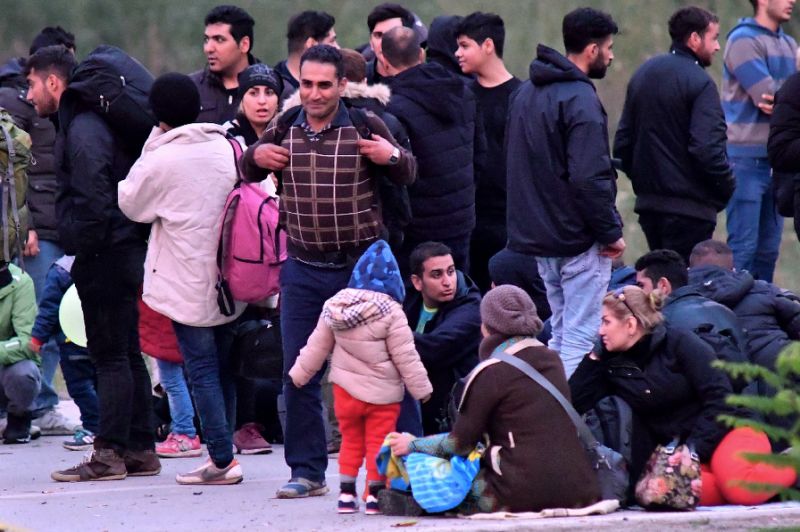 Migrants held in Bosnia trying to cross to Europe.

While sipping a cup of coffee, Ali Muhammad Yasir scrolls pictures on his phone. Suddenly he stops on some 2016 selfies taken in his home town Faisalabad, where he wears a slick suit and holds a professional camera. Looking at him now, with his unkempt beard and his tired face, it seems that a decade has passed. Although he is only 27, Yasir has already lived many lives. An estimated journalist and video-maker for Dunya News, he was forced to leave Pakistan as he became the target of Daulat-i-Islamia Khorasan, a radical group associated with ISIL. Forced to flee as far as possible from home, he decided to try to reach his uncle in Italy.

Once in Istanbul, he agreed on a ‘safe ride’ to Austria with a Turkish truck driver that eventually dropped him in Budapest where he got arrested. Despite the young man asked to apply for asylum, he was deported to Serbia, from where he reached Bosnia.

Now there is the present in a makeshift camp next to a kennel of Velika Kladusa, a Bosnian town close to the border with Croatia, between Yasir and his new life in Italy.

With the former “Balkan route” closed, more and more refugees – most of them from Afghanistan, Iran, Syria, and Pakistan – are trying to make their way into the EU via Albania, Montenegro and eventually Bosnia. But trying to reach the “Fortress Europe” has never been so complicated.

Like Yasir, thousands of migrants are now stuck in northwest Bosnia. All of them want to win “the game”, as they call crossing Croatia and Slovenia undetected to reach Italy or Austria.

They mainly live in the border camp at Velika Kladusa, or in a squalid dormitory in nearby Bihac. Both the towns belong to Una-Sana Canton, an area that is still recovering from a brutal war in the 1990s.

From there it starts the so-called “game” that brings, for most of them, arrest, robbery and violence. Or death, for the less fortunate ones.

According to UNHCR, around 2,500 migrants have been pushed back from Croatia since the beginning of 2018, with 1,500 people being denied access to asylum procedures, including over 100 children. More than 700 migrants reported violence and theft by Croatian officers.
Simon Campbell (Balkan Info Van) and Karolina Augustova (No Name Kitchen) are two activists currently volunteering in Velika Kladusa. “In September, our teams covered 25 different incidents, accounting for 212 victims, 205 were men and 7 were women – they wrote in an article published by Are you Serious – Of these, 32 were minors. Among the incidents listed in the report, it is possible to identify consistent patterns of structural violence. Cross referenced with the body of cases collected during August it is easy to see the types of violence being employed, the methods of confinement and the strategies aimed to prevent access to asylum.”

On Wednesday, November 24, dozens of migrants tried to cross the border but were stopped at a Bosnian police checkpoint. Croatian authorities have also put up a fence to keep migrants out. At the moment, hundreds of men, women and children are stuck at the border. Many of them have launched a hunger strike.

Yasir claims that he has beaten several times. He receives us at the Krajisnik Bar, a small cafeteria run by two brothers, third generation Albanians. Yasir spends most of his time here, as they give him food and beverages for free. “Our family has suffered from what he is going through now, we have been migrants as well. It’s our duty to help him,” they told us.

“Croatian police stole everything I had, including my press card,” Yasir explains as he shows us a digital copy of his documents on his smartphone. “At the camp we live like animals, there are constant fights and you must always be careful not to be robbed. You can’t trust anyone. I’m in touch with smugglers in order to cross the border, but I do not have enough money.”

There’s another man called Ali who lived in the tent city close to the kennel. A yazidi born in Dahuk, Ali lost a leg due to an explosion caused by ISIL during the Sinjar Siege. After moving to Germany with his family in 2015, he returned to Iraq as ISIL had meanwhile killed one of his children that had remained there.

When we met him he was laying in a tent surrounded by mud and rubbish. The Croatian police had beaten him and destroyed the prosthesis that allowed him to walk. He concluded the interview by guaranteeing that, somehow, he would succeed in going back to Germany. A few days later, an Italian doctor reported on his Facebook page the she has seen a yazidi migrant without a leg in Milan. Ali had managed to overcome the Croatian and Slovenian borders by binding with adhesive tape the destroyed prosthesis.

Several organizations and activists in Bosnia have called on the EU and local authorities to urgently solve the issue by helping to provide adequate accommodation as well as logistical and economic support for those working on the ground.

The vicissitudes of migrants in Bosnia have eventually reached the European Parliament as some 22 members from 11 states have submitted a request for a parliamentary interrogation on the living conditions of migrants. “We are asking the European Commission what initiatives it plans to take to monitor the dramatic conditions of migrants on the border between Croatia and Bosnia-Herzegovina and to ensure that their fundamental rights are respected,” Italian MEP Elly Schlein said. “

Under the current regulations, the first EU country that asylum seekers enter is in charge of examining their asylum claim. This rule has been severely criticize by Southern countries as disproportionate responsibility compared to other EU countries. They ask to reform the regulation, the so called Dublin system, and to introduce relocation quotas for each EU countries.

To date, nothing has changed and the right-wing wind blowing in Central and Eastern Europe is fostering the belief that migration flows are corrosive for the national stability. The consequence is the tendency to externalise the asylum responsibilities to third countries. Like Bosnia.

As Bosnians headed to the polls on October 7, the migrants issue seemed to have affected an election campaign that focused more on deep ethnic divisions than the unemployment, rampant corruption and all the other problems that are plaguing the Balkan state. Just two weeks before the elections day, Austria’s far-right Vice-Chancellor Heinz-Christian Strache said he supported Bosnian Serb leader Milorad Dodik’s tough position on the migrant crisis, invoking more efforts to strengthen borders, so that migrants could not come to the Balkans. Like Dodik, politicians at all levels have used the migration issue to attack their enemies.

To make matters worse, Italian police are illegally detaining migrants who’ve managed to cross the border, loading the migrants into vans and bringing them to Slovenia. Once there, they are held at a secret location and and finally dumped, once again, in Bosnia.

According to Gianfranco Schiavone, president of ICS, the Italian organization that manages migrant affairs in the border town of Trieste, this brutal pattern is repeated again and again, “violat[ing] European regulations and Italian laws.”

Meanwhile, temperatures are coming down and staying in tents is becoming more and more complicated. “I can’t sleep anymore,” writes Yasin on Facebook. “It’s cold here, everyone is nervous, I’m stuck in hell. This is not the Europe I was expecting when I escaped from ISIL.”