Yesterday we visited a Refugee Camp in Areos Square in the centre of Athens where we interviewed activists of Radiofragmanta, a community radio run by a local anarchist collective. 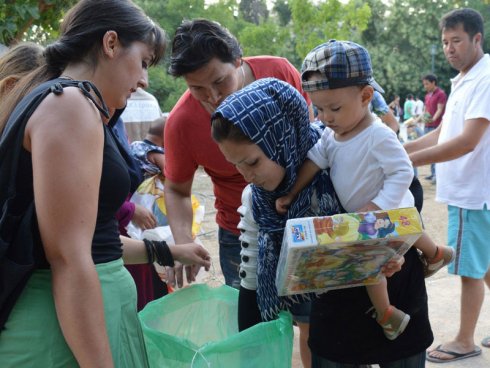 What is the name of this park?

This is Areos Park and it is located in the centre of Athens, near the Polytechnic school in the neighbourhood of Exarcheia. Many immigrants, about 400 hundreds, are now squatting this place because they nowhere to go.

What are their demands?

Most of them demand papers to leave Greece so that they can go to other places in Europe. Others are asking to stay and to live here because they have been chased because of their religion or race in Afghanistan, Syria and other countries like that. Most of them are from Afghanistan, they are Shias and have been threatened by the Islamic State and the Taliban.

What is the response from the community? Have the people been supportive?

In their misfortune these immigrants are “lucky”, because this place is located near Exarcheia where there is a very political community of anarchist and left-wing activists, so they are helping them. Also people in the nearby neighbourhoods, they see the problem, they see that there are 400 people, mostly children and women and they are bringing them food, clothes, shoes, tents, toilet paper, soap, water. The municipality of Athens has only open one water main – this is for 400 hundred people. There are no toilets, nothing at all. Everything you see here is an act of solidarity.

What has the government done to help the migrants?

The government has not done anything so far and it is mainly trying to hide the problem. In fact, it is convenient for them that the camp is not located in Syntagma, which is visited by tourist from all over the world. Besides, most of the people in Greece are on vacation. You cannot see on television what is going on here. The mass media reports nothing.

This is the second refugee camp in Athens. Could you tell us a bit more about the first one?

This is the second squat of immigrants in a public space in the centre of Athens. The first one took place a month ago, in that occasion Syrian refugees in hunger strike seeking asylum for political and other reason and war refugees organised a camp in Syntagma Square. The first wave of immigrants came to Greece at the mid of 1990s and we had the same issues back then, with immigrants from Kurdistan and Albania – squatting Omonoia Square, Koumoundourou Square. It is an on-going issue that Fortress Europe doesn’t want to see, either solve or help. They are killing migrants in the Mediterranean Sea, in the Aegean Sea and in the Evros border with Turkey. They are killing them on the border, because they just don’t want them to come here. They only want their country, their oil, and their opium in Afghanistan. The American and the EU together are conducting a war against these people because they are black, Muslim, or African. They are taking their countries and their resources, for that reason these people have to come here to Europe, not particularly to Greece, they want to leave Greece and go to other countries in Europe.

What difficulties the migrants face?

Since Greece has signed the Dublin II (a regulation that controls the number of asylum seekers) if the refugees are stopped in any other European country they are brought back here, to Greece, which is their first country of entrance because they have no papers. But they cannot go back to their country. These people are in prison here in Greece, they cannot go to other countries in Europe. The government is not providing them with any kind of documentation, so they cannot stay in Greece and they cannot go to other countries either. They are in prison in Greece, on the streets of Athens and in the Islands.

What is the perspective in Greece?

All these years, Syriza – because they say that they are on the left – they were relating or trying to be related to anarchist showing some support before the elections. Some people among the anarchist movement supported Syriza but this party is now showing its true face and they are applying austerity measures.

Some people outside Greece probably don’t know, but Syriza, the main party in the government is in alliance with Anel, a right wing party. They [Anel] are not Golden Dawn but they are a very right wing party, they are homophobic and racist. It is a surreal situation. They are associate to ‘patriotic’ parties like the Marie Le Pen’s National Front Party in France.

This is not a left-wing government, after the elections all the support and the solidarity actions have stopped. And now they are implementing a third referendum, social reforms, and a very strict package of measures by which basic salary and pensions have been affected by cuts.