At a press conference on November 10, Mike Pompeo became the latest Republican to dispute Biden’s electoral victory, claiming that the transition to “a second Trump administration” would go off without a hitch. What does this mean for Trump’s efforts to contest the election? 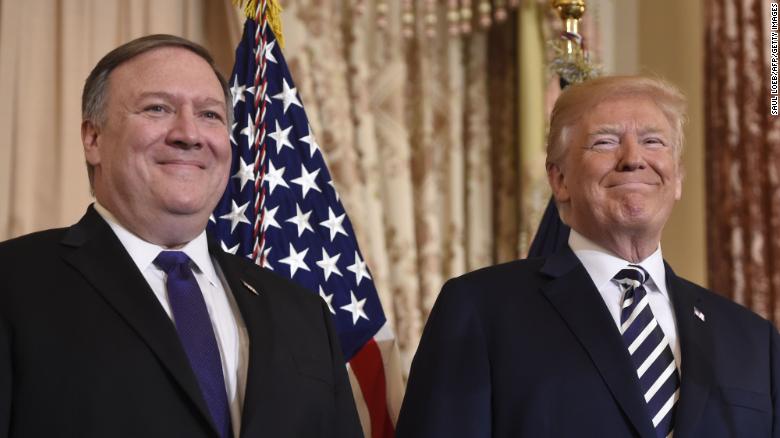 On Tuesday afternoon, Secretary of State Mike Pompeo said in a press conference, “There will be a smooth transition to our second Trump administration.”

His comments came right after tweets from President Trump this morning  doubling down on the notion that he will be declared the winner of the election after he wins several lawsuits disputing the results.

WATCH FOR MASSIVE BALLOT COUNTING ABUSE AND, JUST LIKE THE EARLY VACCINE, REMEMBER I TOLD YOU SO!

Although Donald Trump has essentially thrown the kitchen sink at the electoral process, filing several lawsuits, it is essentially impossible that the election results will be overturned. Indeed, some of these legal proceedings have already been thrown out. But Joe Biden is ahead and has already been declared the winner in four key swing states: Georgia, Arizona, Pennsylvania, and Nevada — and he only needed two for an Electoral College victory. In Pennsylvania and Nevada, Biden is up by tens of thousands of votes.

Biden’s victory is pretty clear to everyone. On the one hand, Biden has given his acceptance speech. Foreign leaders have called to congratulate Biden, including Israel’s Benjamin Netanyahu, Turkey’s Recep Tayyip Erdoğan, Canada’s Justin Trudeau, and others. All of the media has recognized him as President-elect. This includes FOX News, which previously played a central role in buttressing Trump during his 2016 campaign and throughout his administration. However, FOX seems to be divorcing Donald Trump. It was the first network to call Arizona for Biden, to the shock of its own anchors and the Trump administration itself. And further, yesterday FOX cut away from Kayleigh McEnany, Trump’s press secretary, while she was speaking, saying that the network would not support the spread of misinformation. Even some Republicans have congratulated Biden on his victory, including Susan Collins, Mitt Romney, and others

Not only is Trump refusing to concede, but he and his administration are refusing to move forward with the transition process. The General Services Administration (GSA), which is led by Trump appointee Emily W. Murphy, is responsible for overseeing the presidential transition. Yet Murphy has refused to move forward with the transition, prompting the Biden camp to consider legal options. Further, Attorney General William Barr has authorized federal prosecutors to investigate voter fraud. In response, the head of the Department of Justice’s voter fraud division, Richard Pilger, resigned in protest.

While certain Republicans have recognized a Biden victory, other sectors of the Republican Party are going along with Trump’s schemes. While most have not gone so far as to claim that Trump actually won, politicians such as Mitch McConnell have not discouraged Trump either. To the contrary, McConnell said that the President is “100% in his rights” to organize recounts. The two Senators from Georgia who have been forced into a runoff in January demanded that the Republican Secretary of State of Georgia resign after he said there was no evidence of widespread fraud in the elections. Aligning themselves with Trump, this may be a way for these two senators to assure that the Trumpist vote will be called in their favor come January.

According to The Washington Post’s Daily 202, a senior Republican official says not to put too much stock in Trump’s efforts to contest: “What is the downside of humoring him for this little bit of time? No one seriously  thinks the results will change.” He went on to say, “It’s not like he [Trump] is plotting how to keep Biden from taking power on January 20th.”

Instead, Trump’s rampaging tweets might be another attempt for him to take advantage of his last months in office. As James Pindell of the Boston Globe explains, refusing to concede is a cash cow for Donald Trump. The “Election Defense Fund” which was created to fund vote recounts can also be spent on campaign debt. Another committee, called “Trump Make America Great Again Committee” will give 60 percent of the funds raised to campaign debt and the rest to the  Republican National Committee. In other words, the Republicans are exploiting the false hope that Trump can win the election in order to fundraise.

Pindell also argues that this is about restructuring voting laws in the future — casting doubt on mail in ballots and seeking harsher voter restrictions. Lindsay Graham said, “If we keep the Senate, we need to do a joint committee in the Senate to analyze mail-in balloting and how it worked in 2020.” In Florida, where Trump eked out a victory by thin margins, Republican Senator Rick Scott wants to change ballot counting procedures. Voter suppression may be a key way that a Trumpist Republican party can continue to survive, despite a shift in the suburbs away from Republicans and a stronghold of Black and Latinx voters who continue to vote for the Democrats.

This points to a third reason why Trump might be engaging in this sore loser charade: He wants to be sure everyone knows that Trumpism is not gone. He may even be on the ballot in 2024, as he has already intimated to people close to him. For now, Donald Trump wants to go out with a bang, as a polarizing figure, revving up his base to believe the elections were rigged. The “burn it all down” politician they voted for will go out with a “burn it all down” rhetoric, refusing to raise a white flag to establishment neoliberal Joe Biden. It will be a way for Trumpism to continue past the election, building a right wing populism that, far from going away, could become stronger during the Biden administration.

Liberals will shake their heads at this display and click their tongues about such a vulgar show. To them, this election was a total victory, a de-throning of the would-be authoritarian who is now giving his last gasp of petulant rage. But Trumpism is not gone and Biden’s neoliberal restoration will only feed into the resentment and economic devastation that drew many of Trump’s base to his politics in the first place. As we have argued in the past, you cannot defeat Trumpism in the polls, even if Trump will not be President. We need to provide a real alternative to working class people that presents a real challenge to neoliberal Joe Biden and the Trumpist far right.