Minneapolis Has Money for Cops’ “PTSD,” But Not for School Counselors

The teachers’ strike in Minneapolis has entered its third week. The Democrat-controlled city can find creative ways to pay out worker compensation claims for cops with PTSD, but it claims to have no funds to provide mental health resources for students traumatized by racist police violence and the pandemic. 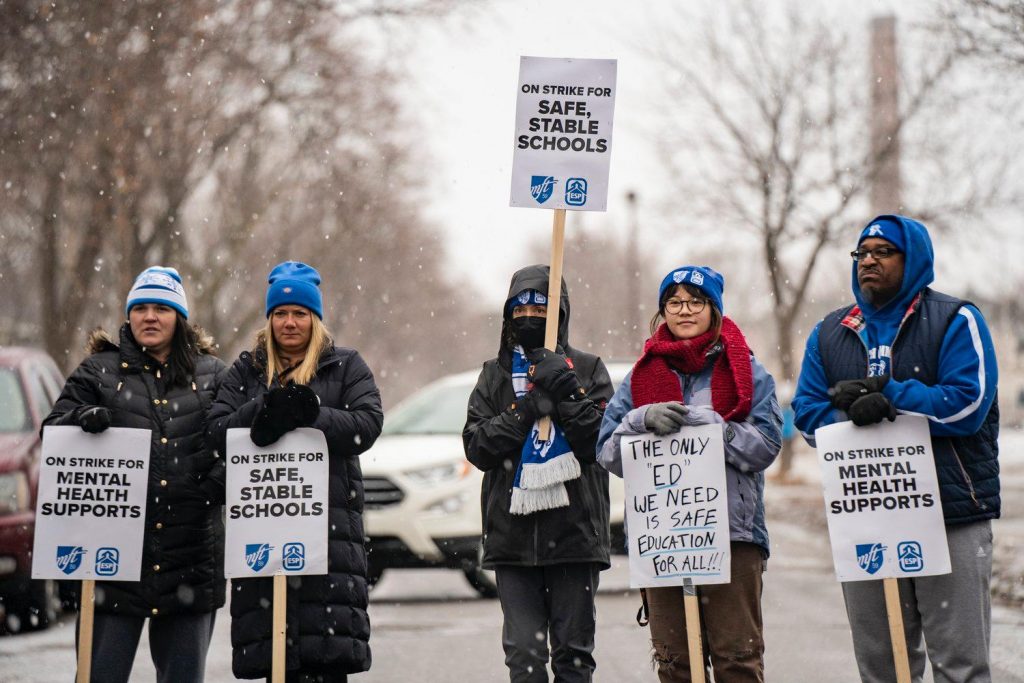 In Minneapolis teachers are coming up on their third week on strike. They are demanding increased wages, smaller class sizes, mental health support for students, and support and retention of BIPOC teachers. The demand for increasing mental health support remains a sticking point for teachers in a city that has one of the worst student-counselor ratios in the country. The city’s students — and disproportionately those of color — suffer the combined trauma of both the pandemic and racist police violence. Until now, the school district has refused to budge and even comically suggested that teachers stop striking, go back to their classrooms, and negotiate while teaching in the same underfunded, overcrowded schools they are striking to change. Yet the city found a way to pay cops large settlements for the “trauma” that they are allegedly suffering, caused by the protests in response to George Floyd’s murder.

According to the Minnesota Reformer, city statistics show that police have filed 200 PTSD claims “since Floyd’s murder in May 2020.” This is because the “city is self-insured, which means its departments pay premiums into a fund to provide insurance and pay workers’ comp payouts.” As the Reformer notes,

The number of workers’ compensation claims nearly doubled the previous decade’s average in 2020 after George Floyd’s police killing, with scores of police officers filing claims saying they suffered post-traumatic stress disorder. That claim is now cited in a large portion of the city’s workers’ comp claims, city officials have said.

The cops claiming they are experiencing post-traumatic stress disorder (PTSD) is leading to large worker compensation payouts from the city. To help pay for this, Minneapolis mayor Jacob Frey’s 2022 budget included $24 million in general funds to “shore up the self-insurance fund due to the recent surge of workers’ compensation claims and general liability settlements.”

And who is really going to pay for this? Ultimately, the same taxpayers who are often terrorized by cops.

Just to be sure everyone has this straight: Members of a murderous, racist institution of policing that basically serves as a familial, intergenerational, and societal PTSD-creating factory itself, and that exists to defend capital and oppress the working class, are now getting large payouts after claiming that they have PTSD. Now, of course, it is going to be traumatizing to be an instrument of racial terror for the ruling class, beating up, incarcerating, killing people, and protecting the property of the rich. It is going to be traumatizing to work in a role in which you are taught to perceive ordinary people struggling to survive as threats. But if we say that the inflictors of violence are traumatized, where does that leave the working class who are on the receiving end of police violence? Where does that leave the students harmed by the direct and vicarious trauma of police repression, which was completely unchecked during the uprising and the protests that followed it — trauma that was only exacerbated by the social isolation of a pandemic that capitalists allowed to rip through the working class. Students and community members terrorized by cops can’t file workers’ compensation claims for this, yet this recourse is available to the cops actually inflicting the violence.

One would think a school district, predominantly made up of Black and Brown students who, along with their families, experience untold violence from the police, would be appalled by such a dynamic. These are the same students who watched as George Floyd slowly murdered at the hands of the police, along with videos countless other such victims. In a recent conversation with Eric Moore, the district’s head of accountability, research, and equity, and member of the negotiating team, these students pointed out the trauma they experience from police violence, saying, “That’s why we need mental health support, because we see it every single day and we still have to show up to school.” Another said, “I go to school every single day after a Black person gets murdered! We can’t handle it!”

Yet despite noting the trauma he experiences as a Black man watching the cops murder Black people, in the same conversation, Moore had spoken against the push to defund the police, suggesting that fighting murderous cops was the problem, not underfunded and overcrowded schools:

“All of you have probably been involved in the ‘defund the police’ movement, but families are saying that violence has increased, so some families are leaving the city because they don’t feel safe.”

This is all occurring in a Democratic city, under a Democratic mayor and a Democratic governor who was a public school teacher for 20 year. It is occurring under members of the same Democratic Party that plasters “Black Lives Matter” on whatever it can get its hands on when it serves to present the party or an individual politician as progressive. It is occurring under a party that makes sure there is plenty of funding for cops to murder people, but that can’t find funding to adequately fund public schools. This is the same party whose president, Joe Biden, recently came out against any effort to defund the police in his State of the Union address, saying, “The answer is not to defund the police. The answer is to FUND the police with the resources they need.” This party poses itself as the lesser evil, and its members pose themselves as pro-union and pro-worker. They even may show up on picket lines to say they support picketing workers, but materially they still let this all happen. For the Democrats, just like all capitalist politicians, Black lives matter when it comes to presenting a progressive public image, but those lives don’t matter when it comes to defunding a murderous institution like the police or when it comes to funding schools of predominately Black children.

If it’s not clear already, the institution of policing causes trauma, not uprisings challenging that exact institution. Funding should be going to Minnesota public schools or healthcare for the working class throughout the city, not to police budgets and worker compensation payouts for cops. Frankly, if cops are so “traumatized” by playing their role of terrorizing Black and Brown populations and defending capital, may we suggest a cheaper solution than PTSD payouts: they can leave their jobs and take a few more racist murders off the street. Or maybe an even better option would be to just abolish the police altogether?