On Thursday, over 100 Minneapolis students walked the picket lines and organized a sit in as a show of solidarity with their teachers. They powerfully confronted the district’s negotiating team and spoke truth to power. 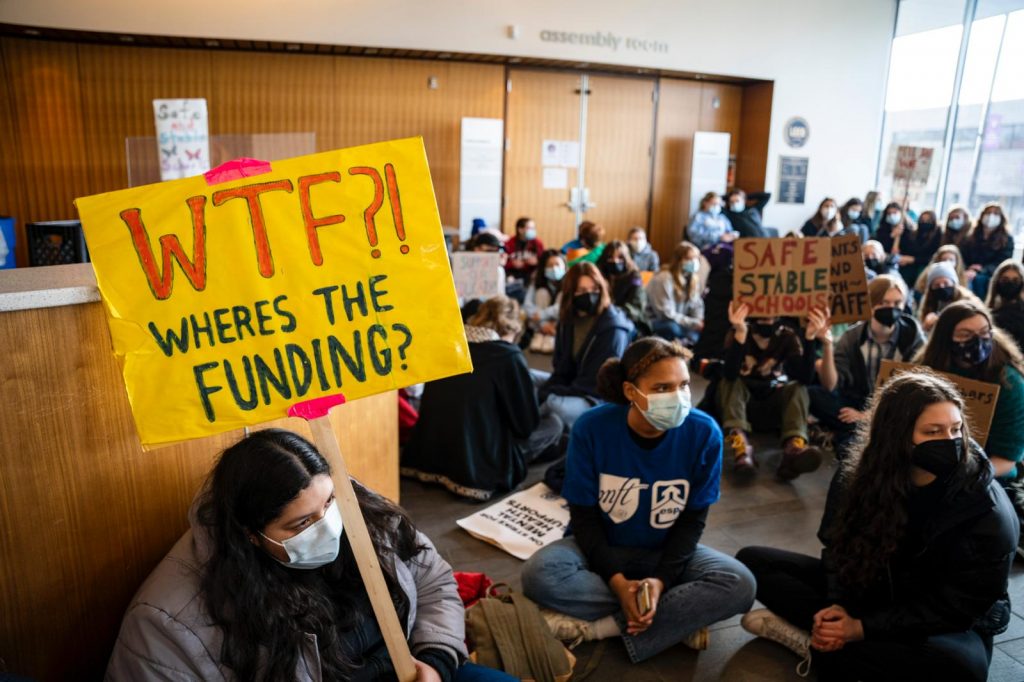 For the second time in a week, students mobilized in solidarity with striking Minneapolis teachers. On Thursday morning, the students gathered at the Davis Center at 9:30 a.m., where ongoing negotiations are taking place between the teachers’ union and the school district. Only a few hours later they confronted three members of the Minneapolis School District’s negotiating team, demanding to know what the district plans to do to improve their schools and meet their teachers’ demands.

Teachers’ demands are not only about higher pay (although that is a demand). They also include a struggle for better learning conditions for students. They are on strike for smaller class sizes, recruitment and retention of teachers of color, and more school counselors.

Yet, the district hasn’t agreed to any of these demands. In fact, they proposed that teachers end the strike, go back to their classrooms and negotiate while teaching — in other words, giving up all their leverage.

The students held their ground, refusing to be split up. As one student put it; “We are not one, we are all of us.”

The students demanded to see Ed Graff, the school superintendent who was “in a meeting” when the students arrived. The students chanted “Ed Graff, where you at? Coward!”

Finally, Eric Moore, the district’s head of accountability, research, and equity, and member of the negotiating team, came downstairs to speak to the students. He was accompanied by Maggie Sulivan and an associate superintendent, neither of which said a word other than to introduce themselves.

Maggie Sulivan, the district’s senior officer of human resources, announced her resignation on Thursday— only a few hours after meeting with the students.  And she isn’t the only member of the Minneapolis School District quitting. Last week Josh Pauly, a member of the school board, also quit saying that “I don’t feel like I am in a place where I can work towards rebuilding trust with the current MPS leadership.”

Clearly the teachers’ strike and the student solidarity is rattling the school board and those that represent the Minneapolis Public School District.

Eric Moore stood, maskless, speaking to about 100 masked students. He proceeded to give the students the run around for an entire hour— giving a condescending lecture that he cynically dubbed a “great conversation.” Every time students tried to speak, he cut them off, asking that they “be respectful” and let him answer.

Students talked about the arts programs being cut in their schools, the lack of mental health support, the huge class sizes, and the mismanagement of the budget. Another student asked why Ed Graff got a raise before the teachers did. Moore justified Ed Graff’s nearly 230,000 salary saying that Graff has “a lot of responsibilities.”

Yet, Moore attempted to position himself as a change agent, saying that he has been protesting his whole life and even had the audacity to name-drop the Black Panther Party.

Only 20 minutes later, he spoke against the demands of the Black Lives Matter movement. “All of you have probably been involved in the ‘defund the police’ movement, but families are saying that violence has increased, so some families are leaving the city because they don’t feel safe.” In effect, Moore argued that it’s not under-funded and over-crowded schools, but the defund the police movement that is the problem.

He went on to explain the trauma that he experiences as a Black man, seeing the police murder Black people. A Black student spoke up by saying “That’s why we need mental health support, because we see it every single day and we still have to show up to school.” Their eyes filled with tears and their voice was full of anger and sadness. “I go to school every single day after a Black person gets murdered! We can’t handle it!” they said.

Currently the ratio of guidance counselors to students in some of the most low income schools is 1 to 1,000 students. Students are not getting the support they need, as every single teacher on the picket lines will tell you.

Moore went on to talk about a school board plan to use Covid-19 relief funding for “student programming” and “tutoring.”

Jane Rohlfing, a sophomore at South High School, spoke up, saying “I have ADHD and dyslexia and I struggle in school. I have never once heard that there are tutors in my school. I am falling behind because I can’t focus when there are 50 kids in my classroom and my teachers are just trying to get them to settle. Where are the tutors?”

Moore responded by saying, “They haven’t been hired yet. We have those positions. They will start next year.” He went on to say, “I’m sorry you are not getting what you need.”

Jane retorted, “None of us are getting what we need. I don’t want your apology, I want action.”

On class sizes, Moore gave a meandering answer, until a student spoke up and said, “The class sizes that you proposed yesterday was a 45 student cap, that’s crazy!”

He went on, “What we’re proposing and the union is proposing are caps. We don’t want to be in situations where you’re in classes with 55 and 60. We both believe that’s a problem. Sometimes with electives, sometimes with electives you may have like 100 students in choir. Okay, those are decisions that we have to talk about because you can have smaller class sizes.”

A student responded, “Why did you ask for only 15 students to talk to? If you think 45 is an acceptable cap, why ask for just 15 students?”

“I’m an introvert, I don’t like yelling,” he responded to audible groans and snickers from the students.

You can’t really make this up.

The frustration by the students was palpable. Many walked out. Those who stayed were enraged and frustrated, muttering under their breath but trying hard to remain respectful. Maybe their teachers taught them a little too well.

Later in the conversation, he talked about the need to distribute funds “equitably”, an increase in arts funding and moving money to low income schools.

A student spoke up: “I go to South High School, which is notoriously in a low income area. We saw no theater money. There was not an increase in arts. We have had the worst year when it comes to resources, behavior, we have seen none of the money that you claim to have distributed equitably.”

After going back and forth for a while, he responded, “You haven’t experienced it. The additional resources, you haven’t been able to see it (the effects of the money) because you haven’t been in school every day.” Students retorted that of course they have been at school.

A different student from South High School spoke from the audience, “We had four principals this year! We had 11 consecutive fights, a kid brought a gun to school. What are you talking about!?”

Moore tried to push back, saying, “My staff have been providing support, mental health support…We need to continue to do that work.”

The conversation ended in frustration from the students, but the reality is that they had spoken truth to power. And power did not listen.

Nari, a high school student who was in the audience said “I feel like the conversation was just used to silence us.”

Another student said, “We were really annoyed. He would talk for so long you forgot what the question was… I felt I was being talked down to. It was insanely frustrating.”

On her way out of the Davis Center, Jane Rohlfing summed up the “conversation”:  “He really loves the sound of his own voice and really hates the sound of ours.”

This interaction only served to inspire Nari to take action. “The teachers deserve more…. I wasn’t satisfied at all. We are gonna be here [picketing] on the daily.”

One student chant goes “We are the students, the mighty mighty students” — and that was certainly on display on Thursday.

The students were brave and clear in the speeches. They spoke truth to power and clearly rattled Moore and the whole negotiating team. You can bet that everyone upstairs, from Ed Graff to the whole school board were worried and watching what students would do. Students are powerful, and the powers that be know it.

The solidarity these students are expressing shows the way forward: as the teachers’ strike enters week 3, they will need active solidarity from thousands of students both at picket lines and at sit-ins like the one on Thursday. Nothing is handed to workers and oppressed people without a fight. The teachers are using their most powerful weapon, the strike, and students must organize and fight alongside them, using the creative tactics that this new generation, molded by the lessons of the BLM movement and a worldwide pandemic, can come up with.

Special thanks to the Minneapolis students who helped contribute quotes and facts to this article.