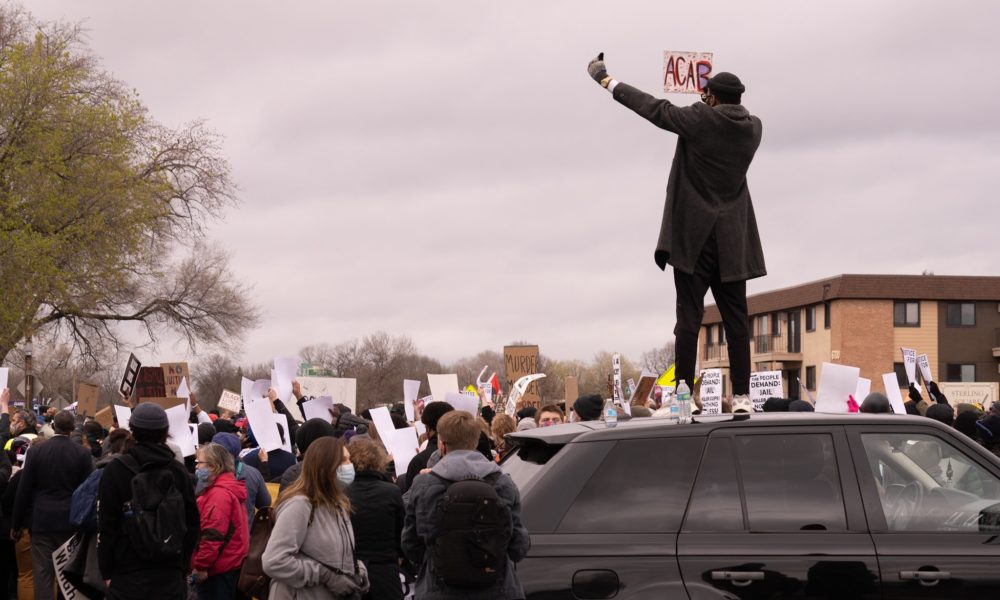 Two days ago, the police murdered 20-year-old Daunte Wright in Brooklyn Center, a small city outside Minneapolis, Minnesota. He was pulled over by the police for expired license plates. During the traffic stop, the police discovered that he had a warrant for missing a court appearance for misdemeanor charges and tried to detain him. Wright tried to step back into his car and Officer Kim Potter allegedly mistook her firearm for a taser and killed him. Officer Potter, a 25-year police veteran, is the union president of the Brooklyn Center Police Officers’ Association.

Left Voice is hosting a panel with a Bessemer Amazon worker and Robin D.G. Kelly, author of Hammer and Hoe to discuss the results of the unionization vote. Sign up and RSVP to the Facebook event.

On the night Daunte Wright was murdered, police used riot dispersal gear to deter angry and grieving protestors who had gathered outside the police department late into the night. The next morning, Brooklyn Center woke up to the militarized presence of the National Guard and the police who were patrolling the parking lot of Shingle Creek Crossing, a shopping center where Walmart and other big box stores like TJ Maxx are located. The National Guard and police had barricaded the parking lot and were turning cars away. There was also a heavy police and National Guard presence at the Brooklyn Center Police Department. Barricades were set up to wall off the department from the public, and military-style trucks were seen rolling in and out.

Elected officials and law enforcement leaders offered tepid condolences, but their sympathies were drowned out by their strong caution against destroying private property — a clear signal of their priorities. President Biden echoed this callous sentiment yesterday, saying that “we’ve got to wait and see what the investigation shows,” and that there was “no justification” for looting or violence. A curfew order was issued for the Twin Cities and neighboring suburbs starting at 7 p.m. The mayor of Brooklyn Center fired the city manager, and the city council recommended firing Officer Potter.

Yesterday evening, hundreds of protestors gathered outside the Brooklyn Center Police Department. A few miles away, people held a vigil for Daunte Wright.

Last night, as 7 p.m. approached, some people left, but many defiantly stayed out past the curfew. Law enforcement used riot dispersal gear on the crowd again. Chants of “No Justice No Peace” and “Daunte Wright” could be heard on local live news feeds along with drum sounds, flashbangs, and fireworks. 40 people were arrested.

Almost a year ago, the Twin Cities area was the center of the George Floyd rebellion. Now, in the midst of the Derek Chauvin trial and a day after Daunte Wright was killed by the police, anger and grief over racist police killings is pouring out into the streets once again.

Minneapolis Police Chief Medaria Arradondo stated yesterday that the communities were traumatized from people destroying property, but he failed to mention the trauma inflicted by the violent, racist terror that the police inflict every day. In an already militarized Twin Cities, it is clear that law enforcement is here to protect businesses and private property — not people.

As of writing, law enforcement continue to guard big box business and their police fortresses while brutalizing another emerging multiethnic rebellion. Whether this rebellion in Brooklyn Center, Minnesota will continue and spread to other areas remains to be seen. However, the people out in the streets and those watching at home cannot unknow what they learned last summer after the murder of George Floyd: that the police has always existed to protect capitalism and the ruling class. Protecting capital is like breathing to any form of policing. No amount of police reform or restructuring will cut off the oxygen supply that is the capital-protection role of police.

As we demand accountability from the racist police, we must organize against the ruling class who exploit us for our labor to maintain their profits. We must also remain vigilant of ruling-class attempts to co-opt and infiltrate our movements.