Many Minneapolis Teachers and Educational Support Are Dissatisfied with Tentative Agreement

The Minneapolis Federation of Teachers (MFT) and the Educational Support Professional (ESP) chapter reached a tentative agreement that the rank and file has to frantically vote over this weekend. 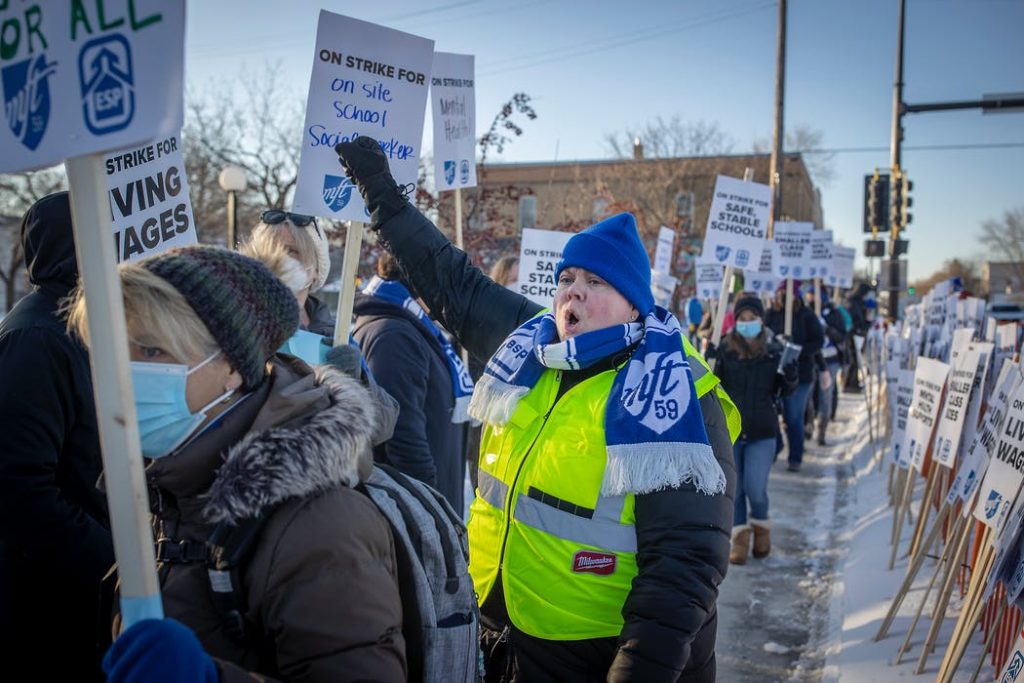 The strike that began on March 8 has been a strong indictment of the defunding of public education. Building upon the 2018 and 2019 teacher strikes, while the Minneapolis strike is in a state of flux, Sacramento teachers have begun their strike in California. The struggle in Minneapolis is part of a larger process across the United States. The spirit for revolution is particularly high in Minneapolis, as residents still feel the effects of the uprising in the wake of the murder of George Floyd.

On Friday, both the Minneapolis Federation of Teachers (MFT) and the chapter representing Educational Support Professionals (ESP) reached a tentative agreement (TA) that, despite its presentation as a “historic” achievement, broad sectors of teachers and educational support staff are dissatisfied with. Frustration is not only limited to the result of the negotiations, but also comprises how the tentative agreement was presented. One of the main questions going around if there is forces to fight for more or not.

Some of the main shortcomings of the TA include:

The agreement became available last night, the vote began this morning, and they are calling teachers and staff back to school this Monday to be ready to start classes on Tuesday. This puts more than 4000 education workers up against the wall to make an important decision that will affect the entire Minneapolis community.

This pressure goes against the democratic right to have a sufficient amount of time to discuss the pros and cons of the agreement, assess how the frontliners would handle a continued strike, and discuss a plan to continue the fight in each school.

The negotiations took place behind closed doors, and there was no structure in place for teachers and educational support staff to get involved in the process. It was not until the last days that membership could get a better sense of the status of negotiation. And now, the vote is being hurried without time for due consideration, further complicating the process and making it more of a rush job.

Minneapolis Public Schools (MPS), with superintendent Ed Graff who makes $225,000 a year and Eric Moore at the helm, want to rush the workers’ decision. They have done everything possible to delay bargaining, including not showing up in person for several meetings. The conscious decision to drag out bargaining is intended to kill time until the workers are forced to vote on a deal feeling pressured and strangled by their economic situation, with the particularly cruel threat of getting rid of workers’ health insurance hanging over their heads.

This goes beyond MPS. Mayor Jacob Frey and Governor Tim Walz (both Democrats) have turned their backs on the thousands of teachers who have mobilized day after day in the schools and around Minneapolis in freezing temperatures. The union has consistently pointed out the budget surplus in Minnesota, and the state didn’t hesitate to make big concessions to the Minneapolis Police Department, including a starting salary of $74,000/yr with a $7,000 signing bonus. In contrast, ESPs under this tentative agreement still would not achieve a meager $35K per year.

One of the main concerns is the actual economic situation of the many workers who live paycheck to paycheck. No strike should be defeated for lack of money. On the one hand, the American Federation of Teachers (AFT) should donate much more money to this strike, as the AFT is worth over 500 million dollars, and has millions already set aside for strike funds. Beyond funding the strike, the AFT must call upon its 1.7 million members to participate in solidarity actions nationwide. There should be solidarity actions all over the country— from wearing blue to show solidarity with Minneapolis teachers to street mobilizations. The same goes for other unions representing millions of workers. On the other hand, union rank and file members, community organizations, and socialist organizations need to multiply our efforts to contribute to their strike fund and nationalize their struggle if this continues. The outcome of this strike could be a source of inspiration for teachers across the country.

These almost three weeks of daily experience on the picket lines in front of the schools must inform the leadership of the struggle. The structures put in place by each school, such as electing their own strike captains, provide an already functioning network that should be having daily meetings to discuss the problems and make decisions as a group. Right now, multiple meetings via Zoom and chat rooms are happening to discuss the TA. These channels could also serve as a base to build links and relationships to continue the struggle.

If the contract is voted down, the strike has potential to become a larger phenomenon. For that, it needs to be organized in community with other unions demanding the AFT to push for a national campaign. The rank and file should discuss a plan to continue the struggle. Making the strike fund a top priority, coordinating with other unions and workers to organize strikes and solidarity actions, democratizing the bargaining process, building community networks, and continuing to target the political machine responsible for the defunding of public education are all key to continuing the fight that has started in Minneapolis.