State troopers arrested CNN journalists in Minneapolis on live television. We must fight against police attempts to hide their actions and suppress information. 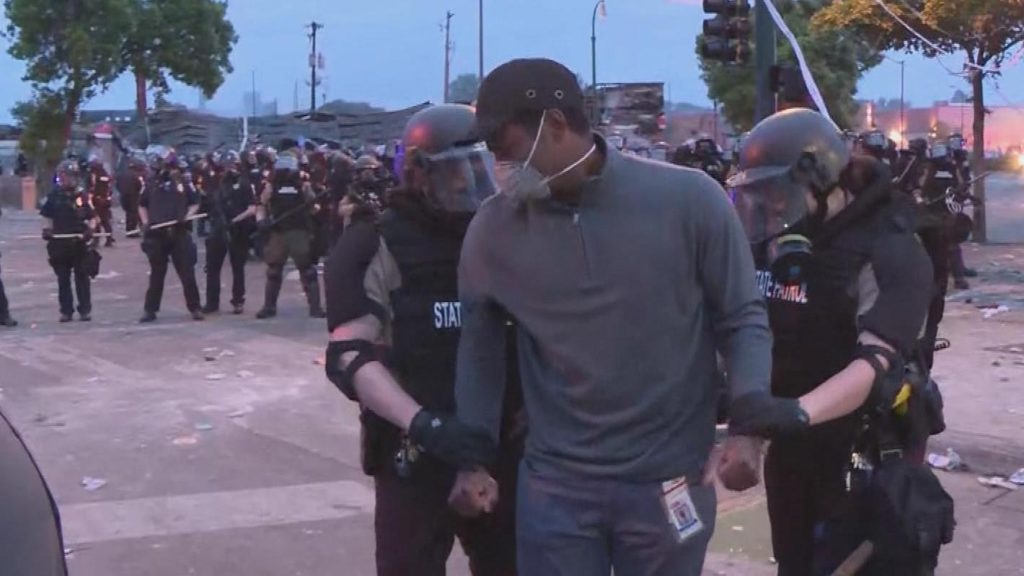 On Friday morning at around 5:00 a.m., over 100 Minnesota state troopers arrived in riot gear near downtown Minneapolis to “restore order” to the area where protesters had taken over a police precinct the night before. CNN correspondent Omar Jimenez, who is Black, was reporting live when he,producer Bill Kirkos, and photojournalist Leonel Mendez were arrested while their camera continued filming.

The footage shows Jimenez, and later the producer and photojournalist, clearly stating that they are reporters who would be willing to move to where the police wanted them to stand. Later, the police claimed that the reporters were being arrested because they had refused to move when ordered, which is blatantly untrue. The Minneapolis state police announced on Twitter that the journalists were released after they were verified as members of the media —also false, given that Jimenez can be seen showing his press badge prior to his arrest. CNN Communications, the team responsible for reporting on internal events at the company, commented on the tweet to call out the lies and offer the live footage as evidence. CNN also reported that another correspondent, who is white, was also in the area, but police allowed him to remain after he identified himself.

Arresting journalists who are standing in public or media-designated areas and are not interfering with law enforcement is a violation of the first amendment, according to the Reporters Committee for Freedom of the Press. The Committee’s guide for covering protests also states that, “police cannot arrest journalists in retaliation for negative coverage or to prevent reporting on a public demonstration.”

These arrests happened during the Ferguson protests too, and are another example of police repression. A reporter who was clearly following orders and posed no threat to the police was arrested on live television, and then the cops lied about it. This highlights yet again that cops are liars. They are using excessive force against protesters, arresting people at random, and lying about it.

Because CNN is part of the bourgeois media, a simple call from the CNN Worldwide President to the Governor of Minnesota, and another call from the governor to the state troopers, got the team released about an hour after their arrest. And, in many ways, this is exactly what makes the arrest so shocking; normally, mainstream media is not a target of police violence precisely because they function as an ally of the bourgeoisie by regularly demeaning with liberal discourse the same people that the police repress using violence. Such media outlets feed into the larger pattern of depicting the protesters as a mindlessly violent horde, rather than intelligent human beings making deliberate decisions about how to react to the police murdering someone in broad daylight.

The police do not want anyone to see what they are doing. That way, they can control the narrative and continue to avoid accountability for their actions. While the police are inherently part of  the repressive state apparatus, they can function most efficiently if they maintain moral authority in the public eye. That means controlling information, just as in this incident, and just as they do whenever an officer is caught in the act. We will no doubt see many more examples of media suppression — in addition to violent repression of the protesters — in the coming days and hours. We must not look away. Left Voice stands in solidarity with the protesters and all those citizen journalists who, unlike CNN, are offering a counter-narrative to the spring of the bourgeoisie.