Moms Showed Up To Protect Portland Protesters. The Feds Teargassed Them.

On Sunday night, hundreds of moms came out to protect protesters from federal agents. The feds tear gassed them. 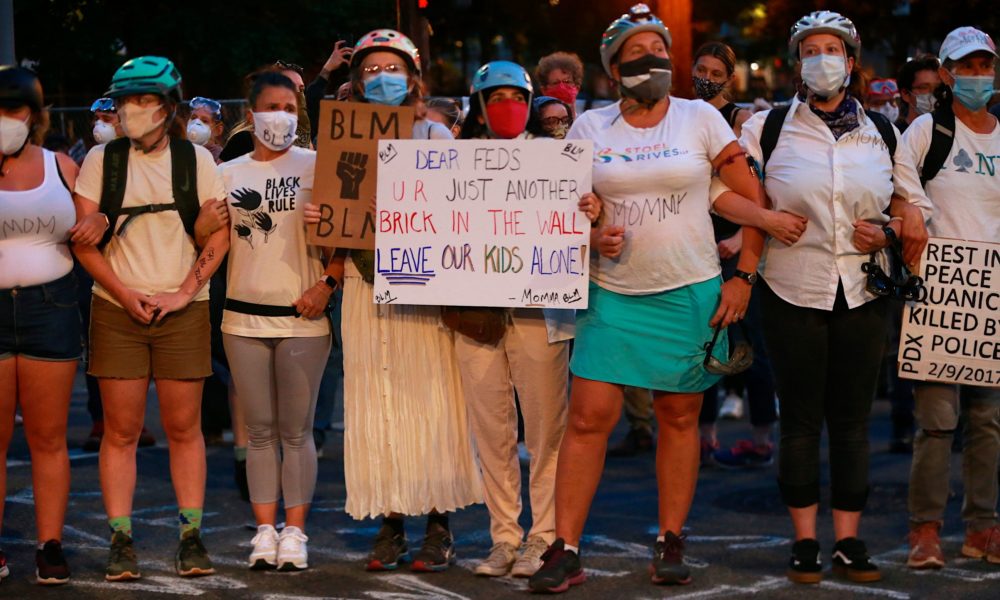 Trump has deployed the U.S. Marshals Special Operations Group and Customs and Border Protection’s BORTAC (Border Patrol Tactical Unit) to Portland to “protect federal property.”  In reality, they are picking people up in unmarked vehicles and detaining them.  They are also deploying tear gas against protesters and “less than lethal munitions.” Already the feds fractured the skull of a 26 year old protester.

A comrade’s Facebook post describes that,  “A group of 300 moms created a wall, arm in arm, between the protesters and the feds and cops. Their chant is, “feds stay clear, moms are here.” They call themselves “Wall of Moms” but to us they are Momtifa.”

Bev Barnum, the organizer of “Wall of Moms” wrote in the facebook event “As of late, protestors are being stripped of their rights by being placed in unmarked cars by unidentifiable law enforcement.” She continued, “We moms are often underestimated. But we’re stronger than we’re given credit for. So what do you say, will you stand with me? Will you help me create a wall of moms?”

Federal law enforcement has started making threats of using violence and making arrests, but moms are up front and standing strong. #PortlandProtest pic.twitter.com/GG6RQiBYee

Barnaum told Buzzfeed News “We wanted to look like we were going to Target, like normal people”— in hopes this could serve as protection against federal agents. It didn’t.

Later in the night, federal agents tear gassed the moms, and deployed flash bang grenades against them. Reportedly one of the moms is pregnant, and the federal agents are putting these peaceful protesters in clear danger.

The feds in Portland just indiscriminately launched tear gas at the Moms and started firing pepper rounds and everyone. Horrifying.

These are Donald Trump’s federal agents, he thinks they are doing a great job. Last week, Trump said, “It was out of control. The locals couldn’t handle it,” speaking to the acting head of Homeland Security Chad Wolf. “And you people are handling it very nicely.”

The Democratic Party politicians in Portland want to wash their hands of this brutality. But Portland police have been known to collude with white supremacists, as well as tear gas protesters under the orders of the Democratic Party.

This event makes clear the brutality of federal agents, as well as the police force: they will tear gas peaceful moms, standing arm in arm. They aren’t there for protection, they are in Portland to deter protests, to intimidate protesters, and to try to make everyone go home. However, the Black Lives Matter movement isn’t going anywhere. Rather, it’s going to get bigger: we’re going to fight against evictions, against layoffs and against every expression of police violence and brutality.