Montefiore physician residents reached 70 percent of votes to unionize with the Committee of Interns and Residents (CIR). They denounced a chronically understaffed hospital and working conditions that do not allow them to provide the best medical care. It’s time to listen to the frontline workers and put patient care over profits. 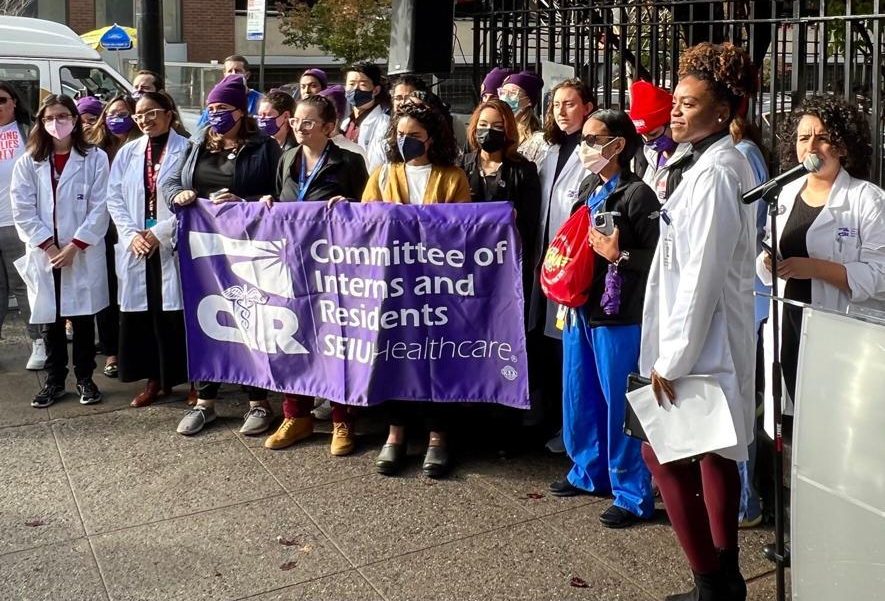 There has been an increase in unionization among thousands of residents, who work as many as 80 hours weekly. Dr. Noa Nessim, a third-year Family Medicine resident and union organizer, denounced healthcare worker shortages in the Bronx and in the nation more broadly. They mentioned how fragile the healthcare system is in the U.S. — and how its increasing corporatization has led physicians and healthcare workers to suffer burnout, being stretched out thin. Dr. Nessim mentioned that “unionizing is our way to fortify it [the healthcare system].” Meanwhile, as we see this medical staff shortage and the opening of a boutique clinic in Hudson Yards, Montefiore is set to close the Family Health Clinic in the Bronx.

Dr. Yang, an emergency medicine physician in Montefiore and Jacobi Medical Center in the Bronx and vice president of the CIR in New York (public sector), mentioned the differences in benefits for the emergency medicine program residents. Half of them are employed by Jacobi Medical Center and are represented by CIR, which gives them an entire range of benefits different from those of Montefiore residents, even though they do the same job. He also highlighted that Montefiore residents should have be able to negotiate to improve their working conditions and, more broadly, have a say in how the hospital runs and the power to address the practical everyday problems that they see firsthand while taking care of patients.

Dr. Nakita Mortimer, a first-year resident in anesthesiology, commented that being a physician trainee “is a balancing act of two truths.” The first truth, for her, is the privilege of caring for the members of the Bronx community and learning from fellow healthcare workers at Montefiore. The other is that the current working conditions bring unnecessary challenges for physicians’ wellness: working 60 to 80 hours, having just one day off in a week, performing the work of two house members (which the institution calls independent intern shifts), earning an income that averages out to minimum hourly wage or less in New York City, one of the most expensive cities in the U.S., and practicing a profession with very high student loan burden. The median medical school loan debt is $200,000 in the U.S..

LV: Drs. Nessim and Mortimer, why did you decide to organize a union?

Dr. Nessim: We Because we believe that patient care can be so much better when all the workers in our hospital are given the appropriate respect and power that we deserve in the hospital to advocate for the changes that we know are needed based on our ground experience every day, 80 hours a week, working with our patients.

Dr. Mortimer: Could not agree more. Definitely the concept of a union, it’s long overdue for physicians, especially in the U.S., where workers’ rights tend to be such a tenuous topic. So I think it only makes sense for physicians who are also workers as well as people who take care of other people for us to be able to have a very distinct legal avenue to be able to advocate for ourselves. … I earlier mentioned just being part of the decision-making process. All that is very important, and it makes a lot of sense when you think about it, as we’re the ones taking care of our patients in this community.

LV: What are the demands you’re fighting for?

Dr. Nessim: The big one is safe staffing in my many, many conversations with residents and fellows in the past two and a half years that I’ve been working on this campaign, the same theme has come up in every single conversation, which is that Montefiore’s attempt to cut corners to save their money by intentionally, chronically understaffing our hospital in terms of nurses, phlebotomists, EKG techs, transporters, you name it, has put such a burden on us as residents and doctors, who at the end of the day need to be taking care of our patients. So if someone’s blood isn’t drawn because you don’t have enough phlebotomists, we’re drawing that blood, when we have 20 other patients possibly, whose life-and-death medical decisions have to be made by us, because we are their doctors. So that’s the number one demand we are fighting for.

Dr. Mortimer: The actual details of what we will be demanding will be fleshed out soon. At the same time, overall, we’re asking for investment in the community. For example, clinic closures: we want to be part of a conversation about that, to make sure we’re prioritizing the needs of our patients and of ourselves instead of, let’s say, prioritizing certain financial reasoning or any other more superficial things — it’s important to take care of the people first. And I think this is a great way to increase accountability. I think any big system needs accountability. It’s not just like a hospital thing for sure. Noa already mentioned a lot of great points. But I think we just want to be able to be treated like the whole humans that we are.

LV: Dr. Yang, you were speaking earlier about the differences in benefits between the residents here [in Montefiore] and in Jacobi. Tell us more about that.

Dr. Yang: Yes, it’s an unfortunate reality that in fact the doctors who work here have different benefits from the doctors who work at Jacobi, even though we treat the same patients, we are part of the same departments, and essentially we have totally different benefits as a result of it. So even though specifically from my department, we have 84 residents, half of them are employed and contracted by Montefiore, and the other half are employed and contracted by CIR in Jacobi. But we treat the same patients, we work in the same emergency urgency rooms with different benefits, ranging from child care, to sick leave and holiday pay and coverage. All this is totally different just because we threw a different stick, and we are paid by a different employer. That’s something that’s totally not all right.

LV: What would be your message to other campuses of Montefiore?

Dr. Yang: There’s never been a better time to do it [unionize]. I think advocacy is something that is super important because you can’t take care of your patients unless you advocate for yourself, the working conditions that you currently work, your benefits — from health care to child care, to be able to take time off when needed — is something essential so that we can provide the best care we can for our patients.

LV: What do you think will be the ultimate benefits for the patients and the community?

Dr. Yang: I think to be valued as a worker here is an essential part, because to be valued by your employer for the work that you’re doing, for the hours that you put in, and be shown that your employer care is not just so critical.

In more recent developments, Montefiore rejected a call to recognize their union. It is time for Montefiore to listen to their frontline workers and to put patient care over profits. Montefiore, recognize the physician residents’ union now!